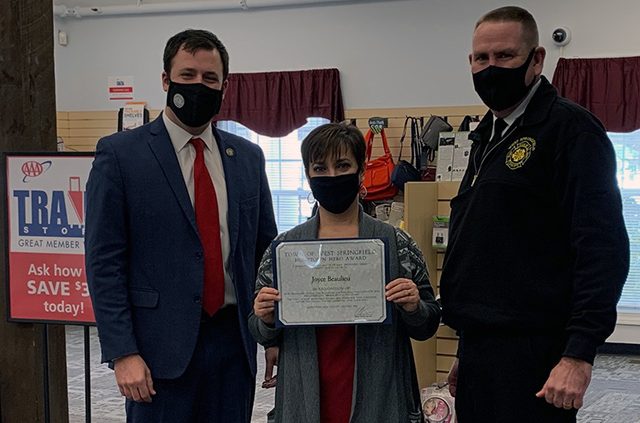 It’s been almost two years since an incident at the West Springfield, Mass., branch made Joyce Beaulieu a hero, but to her, it will always seem like yesterday.

And, in case she ever needs a reminder, she had a Hometown Hero certificate delivered to her at the branch in January. If not for the pandemic, the award would have been presented last spring.

Joyce, the branch manager, and Meg Martin, a former employee who is now a nurse, earned the title together for helping to save a member’s life in April 2019.

The member had intended to renew her driver’s license when she walked through the doors that day. But soon after crossing the threshold she collapsed to the floor. After that, she remembers very little.

Joyce can recall every agonizing moment. She saw what happened and rushed to help. She had someone call 911 and get Meg, who was then in nursing school. Both were trained in CPR but had never used it. An off-duty firefighter who was also there to renew his license, came forward, too.

“We were all side-by-side,” Joyce said.

It appeared the member was not breathing and had no discernable pulse. The three took turns performing manual chest compressions, and the member’s husband performed rescue breathing. After 22 minutes that felt, an ambulance arrived.

A few hours later, the member’s children called the branch from the hospital to say thank you and that their mother was OK. Joyce and Meg visited her about week after the incident, and there was an immediate connection.

“She mentioned that she recognized my voice. I was the one talking to her and asking her to stay with us the whole time,” Joyce said. “We’ve had a connection ever since.”

They are in contact at least once a week, speaking by phone and text messaging often. “We call each other soul sisters. It’s on a completely different level,” Joyce said.

She hopes to never be in an emergency situation like this again, though she would not hesitate if the need arises. And now, the branch has a defibrillator on hand and several more employees trained in CPR, as does every building in the AAA Northeast footprint.

To see a news report of the incident, click here.