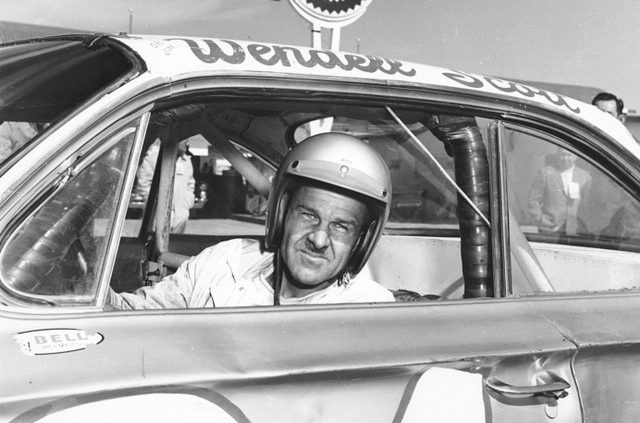 Wendell Scott poses for a portrait in his car as he became the first African-American driver to win in the NASCAR Cup division with a victory in 1963 at Jacksonville Speedway Park in Jacksonville, Florida.

Like nearly any other aspect of America’s past, countless names have been lost or forgotten through the years of the automotive industry’s history. More often than not, those names belong to people of color. Black pioneers have made innumerable contributions to the car world. Here are six trailblazers that steered the industry – and society as a whole – in the right direction.

Born in Kentucky in 1877, Garrett Morgan would go on to become one of the great inventors of his time. By the 1920s he already had several inventions under his belt, including hair refiner and an early version of the gas mask.

Morgan’s success allowed him to own an automobile (reportedly the first African American in Cleveland to do so). After witnessing a terrible accident at an intersection, an idea was sparked.

Traffic signals had already been invented but they only consisted of two signals: “Go” and “Stop.” The problem was that drivers never knew when the signal was going to switch. This caused cars to stop abruptly or still be in the intersection when vehicles traveling in other directions began to move.

To solve this, Morgan invented a T-shaped traffic signal that had a third, “caution” signal, essentially a yellow light. When the “caution” signal was on, traffic in all directions stopped and intersections would clear. On Nov. 20, 1923, Morgan was awarded a patent for a three-position traffic signal. His original traffic signal prototype is on display at the Smithsonian’s Museum of American History.

Aside from his technical contributions to society, Morgan was a pillar in Cleveland’s African American community. He founded the “Cleveland Call,” one of the most important African American newspapers in the country, and was a leader in the city’s NAACP chapter.

Founded a company that would become the first African American-owned automobile manufacturer.

C.R. Patterson was born a slave in Virginia in 1833 but later escaped to settle in Ohio.

Patterson learned blacksmithing and worked for a carriage maker before co-founding his own business in 1873. For the next 20 years, the company ran a successful business making expertly crafted horse-drawn carriages.

In 1893, Patterson bought out his partner and formed C.R. Patterson & Sons. When he died in 1910, his son Fredrick took over the flourishing business as the transportation business was revolutionizing. The younger Patterson began noticing an influx of “horseless carriages” on the roads and knew that automobiles were the future. C.R. Patterson & Sons produced its first car in 1915. Known as the Patterson-Greenfield automobile, it sold for $850.

Patterson & Sons quickly established itself as legitimate auto manufacturer. According to the Historic Vehicle Association, the Patterson-Greenfield model was comparable in quality and workmanship to the Ford Model T.

Became one of the country’s great race car drivers, despite being barred from the Indy 500.

Born in 1897, Charlie Wiggins became an expert mechanic after apprenticing at a local automobile repair shop in his native Evansville, Ind. In 1922, he moved to Indianapolis, opened his own shop and built a race car out of nothing but junkyard parts. Nicknamed the “Wiggins Special,” it was his dream to drive the car in racing’s greatest event: the Indianapolis 500. But Wiggins was denied entry because of his skin color.

Undeterred, he and several other African American drivers formed their own racing league called the Colored Speedway Association. Wiggins’ exceptional driving and top-notch cars lead him to many victories, earning the nickname the “Negro Speed King.”

The highlight of the Colored Speedway Association circuit was the annual 100-mile Gold and Glory Sweepstakes. According to the Historic Vehicle Association, the race’s 1924 debut drew a crowd of 12,000 – the largest sporting event held for African Americans up to that point. Over the next decade, Wiggins would win three sweepstakes championships.

In 1934, driver Bill Cummings hired Wiggins to tune his car for the Indy 500. Road & Truck states that Wiggins posed as a janitor in order to elude Jim Crow laws. Thanks to Wiggins, Cummings won the Indianapolis 500 and set a track record.

Wendell Oliver Scott was born in Danville, Va., in 1921. He learned about cars from his auto-mechanic father. His first job was driving a taxi before he started running moonshine whiskey, which required him to drive fast in order to evade the police.

At the time, Danville’s racing scene was struggling with attendance. Owners thought recruiting an African American driver would help fill seats. They asked the local police for the fastest driver in town and in 1952, Scott became the first African American to compete in an official stock car race. He would go on to win 120 races in lower divisions, while continually being denied entry into NASCAR because of his race.

Then, in 1961, Scott was able to take over the auto-racing license of white NASCAR driver Mike Poston. He was officially a member of NASCAR’s top-level Grand National circuit – the first African American to do so. Just two years later, Scott became the first Black driver to win a NASCAR premier series event with a victory at the 100-mile race at Speedway Park in Jacksonville, Fla.

By the end of career in 1973, Scott had accumulated 20 top-five finishes. The NASCAR Hall of Fame, into which Scott was inducted in 2015, lists his 495 starts 32nd on the all-time list.

Scott passed away in 1990. It would be another 23 years before a second African American, Bubba Wallace, won a NASCAR race, a full half-century after Scott accomplished the feat.

The first African American team owner to enter a car in the Indianapolis 500 and win a race in NASCAR.

Growing up outside of Philadelphia in the 1930s, Leonard Miller was introduced to automobiles at a young age through his mother, who worked as a housekeeper. “All of these rich, white families had all these rare cars that were beautiful and sounded good,” Miller told Smithsonian Magazine. “So, I said that was for me. And that’s what started me off to a lifetime of races.”

He would go on to pave the way for African Americans in the world of auto racing. It began when he formed Miller Brothers Racing, which won dozens of races throughout the Northeast from 1969 to 1971.

In 1972, he became the first African American owner to enter a car in the Indianapolis 500. Miller’s team was also the first Black professional race team to have a national sponsorship and to enter a Black driver in competition in England.

During this time, Miller also created the Black American Racers Association with, among others, Wendell Scott. The group promoted driver development and honored African Americans in auto racing. At its height, it included 5,000 members from 20 states and several racing disciplines.

With the help of his son, the automotive pioneer later founded NASCAR’s Miller Racing Group. The team won many races through the 1990s and early aughts. In fact, the father-son duo became the first African American team owners to win a track championship in NASCAR history with a victory at Virginia’s Old Dominion Speedway in 2005.

Miller was inducted into the Black Athletes Hall of Fame in 1973. Many of his awards, trophies and other memorabilia are currently housed at the Smithsonian Institute.

Following the war, Roberts moved back to his native Kansas City and began selling cars. He specifically targeted selling to the African American community. In 1919, he put his first ad, for seven used cars, in the “Kansas City Star,” the prominent local Black newspaper. By the end of the year, he had secured 60 sales – all to Black drivers.

Hit hard by the Depression, the dealership closed in 1929 – but not before Roberts had etched his name in history. 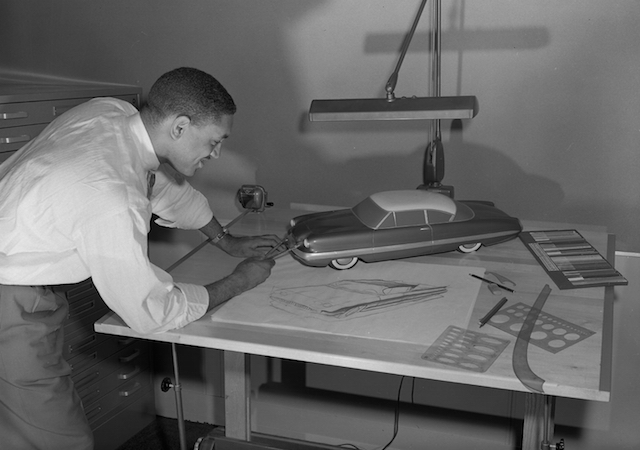 One day in 1934, while walking home from school in his hometown of Queens, N.Y., McKinley Thompson Jr. spotted a silver-grey Chrysler DeSoto Airflow. Although he was just 12 years old at the time, Thompson’s life was forever changed. “There were patchy clouds in the sky, and it just so happened that the clouds opened up for the sunshine to come through. It lit that car up like a searchlight,” he later told the Henry Ford Museum. “I was never so impressed with anything in all my life. I knew [then] that that’s what I wanted to do in life—I want[ed] to be an automobile designer.”

In the early 1950s, after serving in the Army Signal Corps in World War II, Thompson entered and won a design contest in Motor Trend magazine. His prize was a scholarship to the Art Center College of Design. After school, he went to work for Ford’s advanced design studio in Dearborn, MI. With that, Thompson made history by becoming the first African American automobile designer.

One of Thompson’s first projects was contributing sketches for the Ford Mustang. His most notable contribution, however, came in 1963 when he and other Ford designers conceptualized the Ford Bronco. According to the automaker, Thompson’s work “influenced the design language that would become iconic attributes of the first-generation Bronco.

“McKinley was a man who followed his dreams and wound up making history,” said Ford Bronco interior designer Christopher Young. “He not only broke through the color barrier in the world of automotive design, he helped create some of the most iconic consumer products ever – from the Ford Mustang, Thunderbird and Bronco – designs that are not only timeless but have been studied by generations of designers.”

What other Black pioneers in the automotive do you know about? Tell us in the comments below!