There are places in this world where ‘roads’ on the map are mere suggestions. Here are two SUVs that are likely up for such a trip. 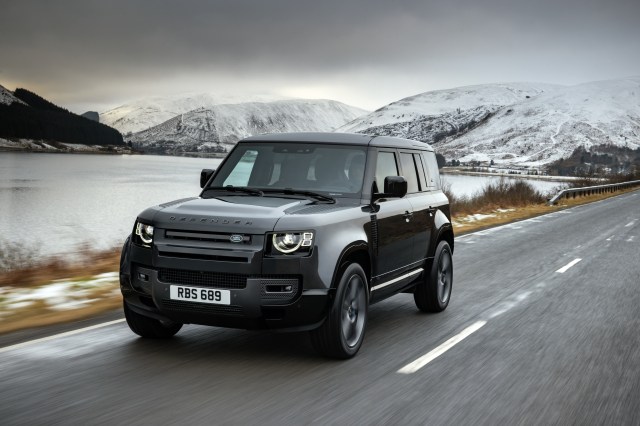 The latest in a long line of Land Rover Defenders is a classy beast that would look good pulling up to the toniest valet stand. That said, it ultimately shines brightest when you leave the civilized world behind. That’s because the Defender’s ruggedly handsome sheet metal wraps advanced mechanicals and electronics that make it quite possibly the most off-road capable model you can buy.

Ride quality and handling on pavement are both better than you’d expect from a tall four-wheel-drive vehicle. Off-road there’s a whopping 11.5 inches of ground clearance and the ability to ford as much as 35 inches of water.

Add a comfortable, upscale interior filled with top-quality materials, high-tech features and a generous 78.8 cubic feet of cargo space and you have a go-anywhere SUV that will help you leave civilization in the rearview mirror.

The classic Jeep is a machine purpose-built to go to remote places other SUVs would rightly fear to tread. Now comes a new hybrid version, known officially as the Jeep Wrangler 4xe, that’s designed to go there in an environmentally friendly manner.

Exploring this new green frontier starts with a plug-in hybrid powertrain built around a turbocharged 2.0-liter, 4-cylinder engine mated to an electric motor. As you’d expect, a rugged four-wheel-drive system is standard, as is a low-range gearbox for when the going gets tough. Perhaps the coolest feature of this setup, though, is that it can propel the Wrangler up to 21 miles on battery power alone.

Otherwise, the Wrangler 4xe is thoroughly familiar. The Unlimited model I tested had four doors that made for much easier rear-seat access and a removeable soft top with a slick power-operated sunroof.

In all, the Jeep Wrangler 4xe is an intriguing choice for those who want both serious off-road capability and eco-bragging rights, but it is definitely not right for everyone.