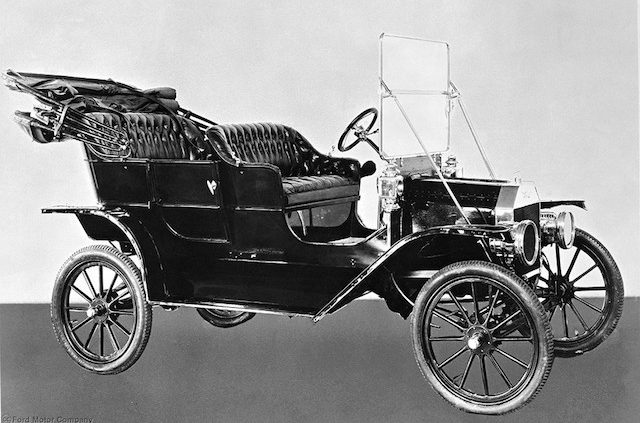 Who invented the car? When did the first car come out? These seem like simple enough questions until you try to define exactly what a car is. Even the Merriam-Webster Dictionary gives “car” only the broad definition of “a vehicle moving on wheels.”

Does your idea of a car include a gasoline-powered engine? Both steam and electric engines predate gasoline. What about wheels – does a car need four wheels? The first patented automobile only included three. You can see how quickly things can get murky.

The truth is, no one person created what we know today as an automobile. Inventors and engineers continually improved on previous designs and technology, dating back hundreds of years.

Who invented the car?

The history of the car most often begins with Karl Benz. The German inventor of Mercedes-Benz fame, filed a patent for a “vehicle powered by a gas engine” on Jan. 29, 1886. His creation was, in fact, the world’s first gasoline-engined automobile.

But Benz’s car was the end product of an idea dating back hundreds of years. None other than Leonardo da Vinci sketched designs for a self-propelled vehicle in 1478. His contraption was powered by a spring that needed to be wound up first. If it sounds unfeasible, think again. In the early 2000s, a team at Florence’s Institute and Museum of History and Science recreated the model vehicle and proved that it did, indeed, work.

It would take nearly 300 years for a self-propelled vehicle to become reality. In 1769, Frenchman Nicolas-Joseph Cugnot introduced the world’s first steam-powered vehicle. As you can imagine, this early design left a lot to be desired. Steam engines were excessively heavy, causing Cugnot’s creation to weigh nearly 9,000 pounds. As such, the three-wheeled vehicle traveled a measly 2.5 mph and was relegated to use by the French army as a military tractor.

In the 1830s, Scottish inventor Robert Anderson affixed a nonrechargeable battery and motor onto a carriage, creating the first electric vehicle. Over subsequent decades, several other engine types were designed, including one fueled by hydrogen gas. 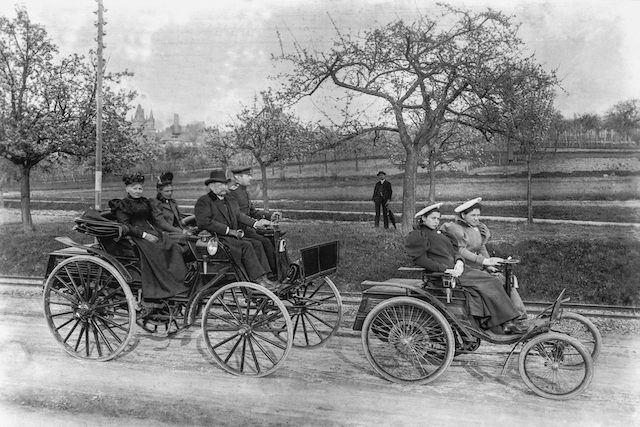 On the move in 1895 in the small Benz “Velo” (right) – Karl Benz’s daughters Klara (at the wheel) and Thilde. At the wheel of the Benz Patent Motor Car “Phaeton” is Benz’s son Richard. The other passengers are relatives of the Benz family.

When did the first car come out?

Benz’s invention didn’t look anything like the gas-powered cars we know today. The three-wheel vehicle was nearly identical to a horse buggy, with a front wheel replacing the equine animal. He knew a four-wheel would be more stable but was dissatisfied with the steering systems available at the time. Benz solved the problem by inventing his own solution: double-pivot steering.

With his new steering system installed, Benz was ready to introduce his four-wheel car to the public. The Benz Velo was unveiled in 1894 at the World Exposition in Chicago. It would ultimately prove to be an unmitigated success. More than 1,200 units were manufactured in total, bestowing the Velo the title of the world’s first production car.

When was the first car made in America?

Around the same time Benz was making history in Europe, brothers J. Frank and Charles Duryea were doing so on this side of the Atlantic. In 1893, the bicycle mechanics from Springfield, Mass., built the country’s first operable gasoline automobile. Three years later, it became the first gas-powered car sold in America.

Competition, however, was close on their toes. By 1909, nearly 500 companies entered the car-making business, though these were all small scale operations. That all changed in 1908 when Henry Ford introduced the Model T. Inexpensive yet reliable, the vehicle made car owners out of more people than ever. The introduction of the moving assembly line in 1913 further reduced the vehicle’s price. When all was said and done, 15 million Model T’s were sold. America has been a car-loving country ever since.

While there is no definite answer to who invented the car, the history of the automobile is always fascinating to explore.

Want to keep reading? Learn how the car has evolved since the Model T first graced the roadways.

AAA members can save on automotive replacement parts and accessories at NAPA.