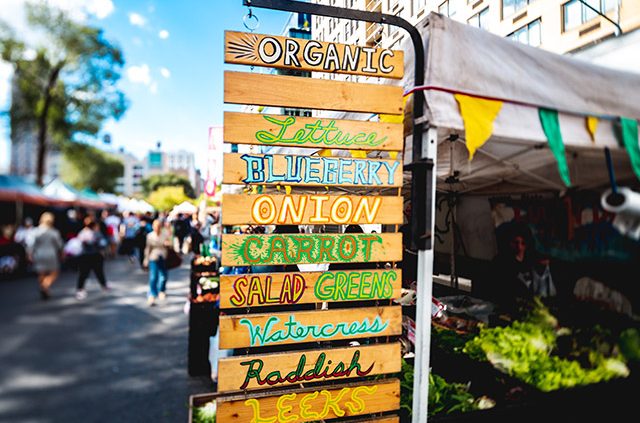 Here are seven Northeast farmers markets that you can’t miss!

This farmers market is nestled in Union Square Park, in the middle of bustling Manhattan. The Union Square Greenmarket is open year-round, on Mondays, Wednesdays, Fridays and Saturdays, giving you plenty of opportunities to visit. The market began in 1976, and it hosts up to 140 farmers, fishers, bakers and artisans during its peak season. It has a busy event schedule, with cooking demonstrations featuring guest chefs, book signings, and educational tours and tastings. Stop by the Union Square Greenmarket for fruits and veggies, heritage meats, farmstead cheeses, artisan breads, local wines and more!

Set on Blackstone Street in Boston’s historic downtown, Haymarket is one of America’s oldest farmers markets. It originally opened for business in 1820! This open-air market is open year-round, through rain or shine, every Friday and Saturday from dawn until dusk. Stop by to visit over 40 independent vendors providing fruits, vegetables, seafood, flowers and more. Haymarket is especially proud of its multicultural makeup, with over 20 nationalities featured among the vendors.

The Portland Farmers Market is even older than Haymarket, and it claims to trace back all the way to 1768! Northeast farmers markets are old! The location of the Portland Farmers Market bounces around the city depending on the day of the week or the time of year. On Saturdays from late April to November, it can be found in Deering Oaks Park. On Wednesdays from May to November, it’s in Monument Square. And in the winter, on Saturdays from December to April, it becomes the Winter Farmers Market (currently at The Maine Girls’ Academy).

The Plymouth Farmers Market takes place at Plimoth Plantation, a living history museum about Plymouth Rock. It’s the perfect backdrop for a farmers market! While you’re there, take the opportunity to visit the Wampanoag Homesite and the 17th-century English village. During the indoor season of November through May, the Plymouth Farmers Market is open on the second and fourth Thursday of the month. During the outdoor season of June through October, it’s open every single Thursday. Its “cultural insights” program features live chef demonstrations, food educators and the sharing of favorite seasonal recipes. Don’t miss the live, local music at every market day! 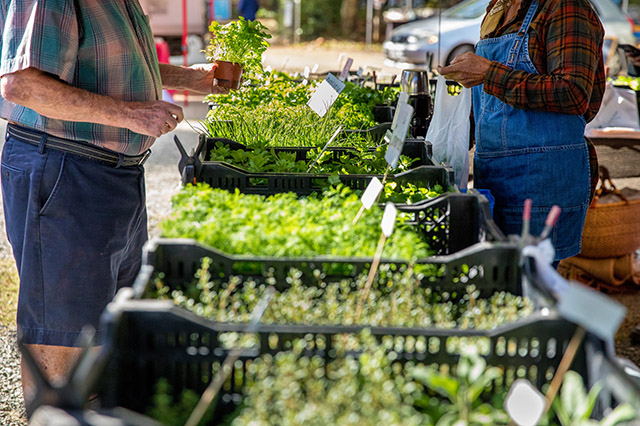 The Hope Street Farmers Market is a farmer-run co-op created and manage by local farmers and artisans. The market runs from May through October on Saturday mornings and Wednesday afternoons, and it can be found in Lippitt Park on the East Side of Providence. At the Hope Street Farmers Market, you can find fruits, vegetables, flowers, cheeses, pastries, seafood and more. On Saturdays, you can also visit the Providence Artisans Market at the southern end of the park. There’s also live music by local musicians and bands on Saturdays (and some Wednesdays). Along with being one of the best Northeast farmers markets, Hope Street Farmers Market was actually named one of the 10 best farmers markets in America by USA Today.

Located on Pine Street in Burlington’s South End, the Burlington Farmers Market has been running since 1980. Visit the market to shop from over 90 stands of local vendors, selling seasonal fruits and vegetables, artisan goods, flowers, prepared foods and more. You can also catch some live music and entertainment while you’re shopping. In winter, the Burlington Farmers Market moves indoors – most recently to the Dudley Davis Center. That way, the locally grown fun never has to stop!

Coventry Farmers Market is relatively young for Northeast farmers markets, at around 16 years old. Still, it’s quickly become one of the largest farmers markets in Connecticut. The market takes place on the Nathan Hale Homestead, which is on the National Register of Historic Places. Coventry Farmers Market is chock-full of special events, like chef demonstrations, recipe and microbrew sampling, guest lecturers, visiting farm animals and even a pumpkin harvest in late October. It’s definitely not to be missed!

What are your favorite Northeast farmers markets? Tell us about it in the comments below!

If you like to eat healthy, farmers markets are an excellent way to get inspired. If you can’t make it to the farmers market as often as you’d like, you can get organic and healthy food delivered to you directly from Thrive Market. AAA members save 10% on every order.