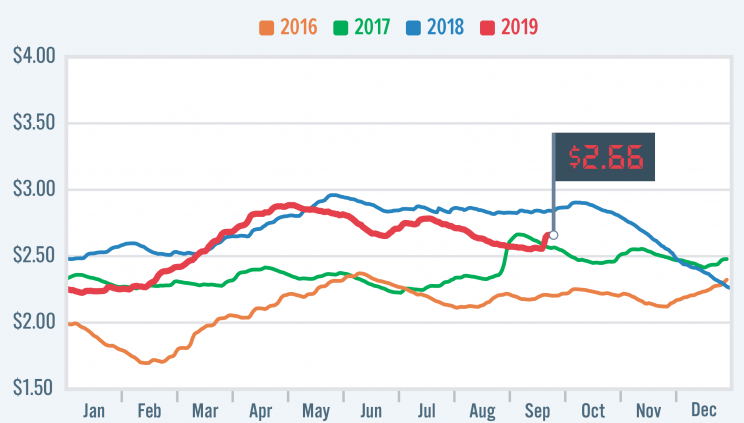 Last week was the first time since early June that the national gas price average jumped more than a nickel in just a few days. On the week, it’s a dime more expensive at $2.66 with half of the states seeing prices increase by 10 cents or more. However, even with the significant increase, the national average is still six cents cheaper compared to last month and 19 cents cheaper than at the same time last year.

Spurred by the Saudi Arabian oil facilities attacks the weekend prior, crude oil increased as much as $10/bbl last week. Gasoline stations reacted by raising retail prices by as much as a quarter, which pushed the national average up six cents overnight last Tuesday. However, by the end of last week, gas prices started to stabilize as reports surfaced that Saudi facilities should be fully operational by end of September.

“At $2.66, the national average is a dime more expensive that last week. The good news is we are seeing downward movement with crude oil prices and stabilization at gas pumps, but Americans can expect some fluctuation through the end of the month,” said Jeanette Casselano, AAA spokesperson. “Should Saudi’s crude production be back to full capacity shortly, the price spikes are likely to be temporary.”

Presidential hopefuls John F. Kennedy and Richard M. Nixon conduct the first of their four debates. It marks the first time in U.S. history that a debate between major party presidential candidates is shown on television.

Motorists can find current gas prices along their route with the free AAA Mobile app for iPhone, iPad and Android. The app can also be used to map a route, find discounts, book a hotel and access AAA roadside assistance. Learn more at AAA.com/Mobile.