Greece: A Classic Choice in Tours of Europe 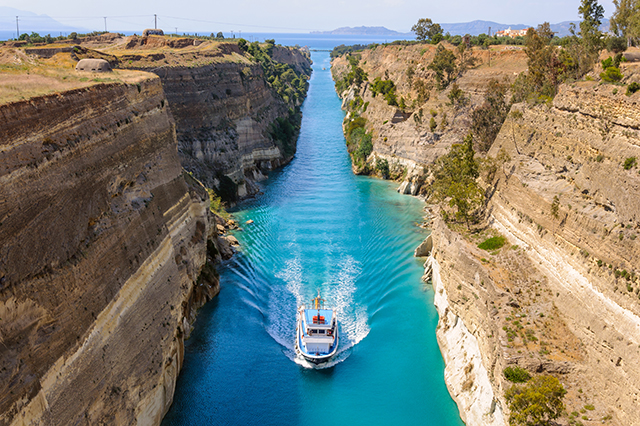 Classical culture meets modern metropolis on a trip to Greece, like this one hosted by AAA Vacations. Other tours of Europe cannot compete with the other-worldly beauty of Greece, where ancient cliff-top monasteries and Spartan history mingle with the temples of Olympian gods.

You’ll enjoy Insider moments like the aniseed bite of a welcome ouzo shot, warming a trail to your stomach, as you explore the Karambelas family’s olive groves and vineyard in Olympia, before dinner, music and dancing.

Keep reading to learn what a sample itinerary of a trip to Greece looks like.

Begin your tour of Europe with Athens, the capital of Greece and historical capital of Europe. Walking through the city’s cobbled streets, you’ll see that its stunning architecture, art and monuments depict the beginning of Western civilization itself. Settle in to the city on your first day and ready yourself for an unforgettable trip amongst ancient reminders of European history.

Wake up to the sights and sounds of a bustling metropolis and prepare to explore the city further on your second day. The combined culture and politics of Greece make it a popular choice for a European tour. Classical Athens was considered the birthplace of democracy and a center for the arts, learning and philosophy.

Today, Athens is filled with reminders of its long history. One of those reminders is the Acropolis of Athens, an ancient citadel located on a rocky outcrop above the city that contains several historical monuments. The Parthenon, the temple dedicated to the goddess Athena, is the most famous in the Acropolis and one of the world’s greatest cultural monuments.

Other reminders of Athens’ historical significance are the Agora — the once political, commercial and religious center of Athens — the Royal Palace and the Temple of Zeus. Hadrian’s Arch, which was built to honor the arrival of Roman Emperor Adrian and the stadium where the first modern Olympics took place in 1896, has been said to separate the old and new regions of Athens. Visit these sites and the Acropolis Museum to see the spectacular architecture that characterizes the city.

After spending the day engulfed in ancient history, take a break from it all and enjoy a dinner in a lively area of the city.

Head to Corinth, a.k.a. Korinthos, a city that rivals Athens in importance to European history, as it played a significant part in the Peloponnesian War. Travel to the Peloponnesian peninsula from the Greek mainland by way of the Corinth Canal. Then, stop at Mycenae, an archeological site that was once a military stronghold of ancient Greece. Here is where you can see the Beehive Tombs, the Treasury of Atreus, the Lion Gate and the remains of Agamemnon’s Royal Palace. Later, visit the Sanctuary of Asclepius, the God of Medicine in Epidaurus. You may recognize the rod of Asclepius, a snake-entwined staff, as the symbol of medicine we use to this day. Then, finish the night off in Nafplion.

Fancy a trip across the mountainside? Head to Olympia as your next stop on this European tour and get a perfect view of the Mountains of Arcadia on your drive over. Olympia is known for being the site of the first classical Olympic Games, which was held in 776 BC. The sanctuary was also a national shrine of Greece that contained many treasures of Greek art, many of which you’ll see remnants of today.

All European tours have a certain flavor about them because of rich history, but Greece is unique because of its mythology as well as history. Explore the Olympic site and museum, and have fun exploring the ancient playground of monuments, statues, votive buildings, temples and more. The most celebrated temples are the Temples of Zeus and Hera. Then, drive north to Patras and head back to mainland Greece for your next stop in Delphi.

Fans of Greek mythology will recognize this next stop as the home of the Oracle of Delphi, who made prophecies through her connection with the god Apollo. Walk the Sacred Way to the Temple of Apollo, which dates back to the 4th century. Every four years, athletes competed in the Pythian Games, named after the oracle and dedicated to Apollo and the arts.

Then, leave Mount Parnassos behind you as you drive to Thermopylae, where Leonidas and his brave Spartans defended Greece against the Persians. Afterwards, cross Thessaly, the “breadbasket of Greece” and head towards Kalambaka on the Pourmaraki Pass.

Next is Meteora, a sandstone rock formation in central Greece that holds one of the largest and most important complexes of Eastern Orthodox monasteries. There are six monasteries in total, all built on natural pillars and hill-like rounded boulders. Visit two of the monasteries with a local guide and take in the mighty view of Meteora valley. Then, it all comes full-circle in Athens, where your trip ends.

Say farewell to beautiful Athens after this once-in-a-lifetime trip. Or you could tack on a cruise to see the Greek islands in all their splendor. Tours of Europe with this much pizazz should never have to end.

Have you been to Greece? Share your memories with us in the comments below.