10 Best Ghost Tours in the Northeast

If you enjoy a good spooky story to get you in the Halloween mood, you might just want to check out a ghost tour. 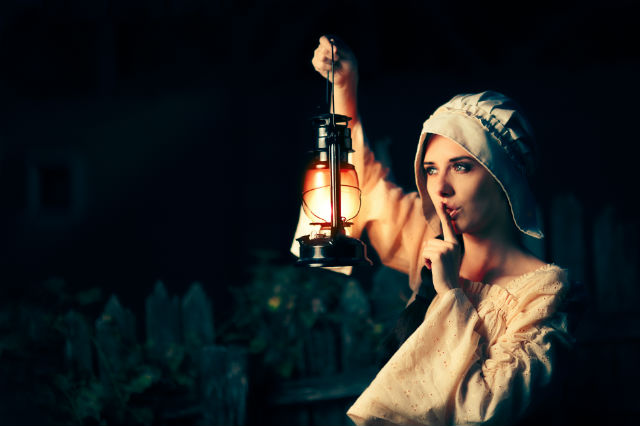 The season for haunted happenings has arrived. But what if dimly lit rooms, strobe lights and costumed actors leaping from the dark corners of a haunted house attraction aren’t quite your thing? What if you prefer history and good ghost stories to get you in a spooky mood? You might just want to check out a ghost tour. Lucky for us, our region is rich with such offerings. Here are 10 interesting ghost tours within a day’s drive.

Fell’s Point is among the oldest areas of Charm City, with a shipbuilding history that includes production of the Continental Navy’s first frigate. Ghost tours explore its maritime lineage with a mix of historic and contemporary tales, such as that of a retired sailor whose favorite polka song played in a local tavern after his death, even after it was removed from the jukebox. Guests 21 and older can explore haunted taverns on a pub walk. Tours of Mt. Vernon are also offered in October, where beautiful architecture blends with spooky stories.

Boroughs of the Dead, N.Y.

Hipsters might be the scariest things to come to New York City in recent years, but they’re not the most frightening part of the city’s history. Voodoo, poltergeists and potter’s fields are all part of a haunted Astoria tour. Or check out the mystical symbolism of architecture in the West Village, walk by the former Brooklyn home of horror author H.P. Lovecraft and learn about haunted taverns in lower Manhattan. Seasonal tours include Ghosts of Christmas Past, in December, and Ghosts of the Titanic, in April.

These tours are separated from others on this list based on pure theatricality. Guests can choose from two ghost walks. The traditional trip explores the dark side of Old Montreal’s past with a mix of ghost stories and history. The second option includes encounters with two spirits – costumed actors – who deliver creepy stories about their characters and the area.

Gettysburg’s bloody past makes it a magnet for history buffs and ghost hunters. Gettysburg Ghost Tours appeals to visitors of either interest by highlighting everything from Civil War soldiers to local architecture. Brave souls can sign up to explore frightening areas using ghost-hunting equipment.

Harpers Ferry has a history seemingly made for ghost stories. The site of an abolitionist raid in 1859 repeatedly changed hands during the Civil War. Pegged as the country’s oldest ghost tour, guests explore several blocks of Harpers Ferry’s lower town area. Many highlighted stories come from a 1977 book written by a former restaurant owner whose inexplicable experiences led her to research the area’s past.

Newport’s history isn’t all sailing, folk festivals and Gilded Age-opulence. Ghosts of Newport tours explore more than 350 years of tragedy in the city’s oldest neighborhoods. Guides claim the stories highlighted on each trip were passed to them by eyewitnesses. Who knows? Maybe you’ll be the next tourgoer to see something you simply can’t explain.

Do you know where you can find the giggling ghost of Mystic? Those who’ve taken a Seaside Shadows tour do. The company offers ghost tours of the well-known coastal community including one highlighting the downtown area with stories of sea captains, boats lost at sea, hidden treasurers and Civil War widows. The other explores Whitehall Burial Ground, highlighting the significance of grave markings and the burial place of interesting local figures. In New London, guests visit Ye Antientist Burial Ground, one of the nation’s oldest graveyards and resting place of important Connecticut historical figures.

Halloween in Salem isn’t like Halloween anywhere else. Salem’s witch trial history gives it a unique historic, and possibly paranormal, pedigree. Sites visited include the city’s old jail, its original witch dungeon, one of the nation’s oldest cemeteries and the Joshua Ward House, which sits on the site of George Corwin’s old homestead (Corwin was a particularly infamous sheriff during the witch trials). Tours end with a look at photo-captured paranormal activity and a bit on vampire folklore.

Strolling the nation’s capital is a good bet any time of year. To properly enjoy such a thing in October, however, one must do so while hearing ghost stories. Victorian-costumed guides lead walks focused on Lafayette Square, across from the White House. Tales of soldiers, first ladies, war heroes and other figures highlight the area’s tragic past.

Can’t get enough ghost tours? Learn all about the New York State Haunted History Trail, where the scares happen year-round.