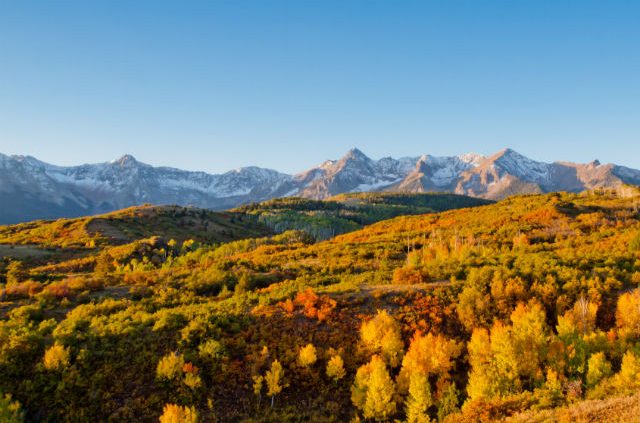 Foliage in the Rocky Mountains.

Contrary to popular belief, the Northeast corridor isn’t the only place to find American foliage. America is full of unexpected and wonderful places to witness the magic of autumn. As the blanket of fall covers North America, trees and other flora across the country turn into brilliant shades of yellows, oranges, purples and reds.

While the fall foliage in the Northeast is typically situated in dense forests or amidst New England architecture, the fall foliage in other areas of the country is often juxtaposed against sweeping mountains, stark plateaus, red clay and wide plains.

Whether you’re a die-hard adventurer or a cross-country leaf peeper just looking to diversify, these unexpected American foliage locations are not to be missed.

Mid-October is peak foliage season for the leaves in Sedona. The elevation in Sedona makes the change in color far more dramatic than it is in most other areas of the Southwest. The best place to catch the vibrancy of the fall in Sedona is at the iconic Oak Creek Canyon. Red leaves dominate the canyon, with occasional, dramatic pops of wild yellows and oranges. Along the popular West Fork Oak Creek trail, you’ll find maples, oaks, and dozens of other deciduous trees. If you want to get some spectacular panoramic shots of American foliage, Oak Creek Vista is the perfect vantage point. You can also take a scenic drive through the canyon along Highway 89A.

FIND & BOOK A HOTEL WITH AAA IN SEDONA, ARIZ.

When you imagine the Grand Canyon, one of the most iconic vistas in America, you don’t usually picture its trees. But the Grand Canyon is full of them, and they come alive with color in the fall. The leaves of birches, oaks, and quaking aspens blush in harmony with the red canyon walls.

The best place to view this treasure of American foliage is from the Grand Canyon’s North Rim, which has an elevation of over eight thousand feet. The colors of the leaves hit their peak from late September to early October. Hurry up, though, because at the end of October, the North Rim closes. From the North Rim you can see trees of every shade and size. Sometimes you can even see a majestic roaming bison.

If you want to make a trip to both the Grand Canyon and Sedona to take in all the American foliage you can, AAA offers an amazing travel package with exclusive tours of both areas.

FIND & BOOK A HOTEL WITH AAA NEAR THE GRAND CANYON. 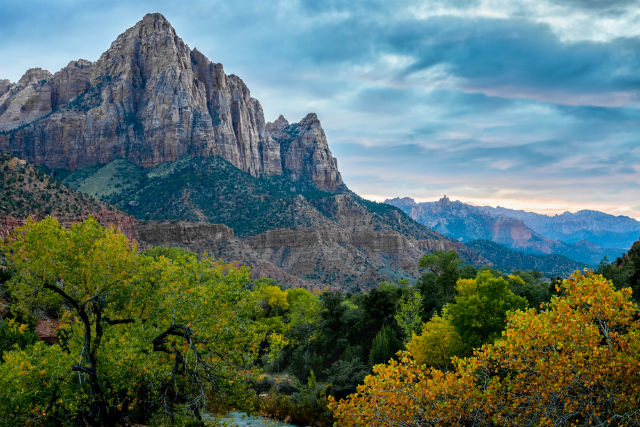 Utah’s first national park is a wonderful place to experience American foliage. Zion National Park is already famous for its red rocks, but the colors of the park get even more dramatic in the fall. That’s when Zion lights up with red sawtooth maples, yellow Fremont cottonwoods, and a myriad of other trees. Trees gather around the curve of the Virgin River and at the foot of Angel’s Landing, and extend all throughout the vast park.

The best time to see the fall foliage in Zion would be in October and November, though altitude plays a major role in what time trees turn. The higher you go, the earlier the foliage peak is. In November, however, the park allows private vehicles to travel along the Zion Canyon Scenic Drive. If you want, you can even stay at one of their campgrounds, sleeping among the trees.

One of the most amazing and unexpected spots to see fall foliage is the wilds of Alaska, but that’s exactly what’s in store at Denali National Park and Preserve. Denali is a national park that spans 6 million acres of Alaska. Since it’s so far north, its peak fall foliage season is from late August to mid-September. It’s a short window, but an incredibly colorful one.

FIND & BOOK A HOTEL WITH AAA NEAR DENALI NATIONAL PARK AND PRESERVE, ALASKA.

I know what you’re thinking: “Hawaii?” Hawaii doesn’t really have seasons, per se, other than “wet” and “dry,” but it does have some of the most beautiful American foliage. Some of Hawaii’s flowering plants and trees even resemble the colors we might see in a mainland forest in autumn. You could easily mistake groves of gold trees in bright yellow and royal poinciana trees in red for deciduous trees in autumn. African tulip trees also have large, orange clumps of flowers adorning their branches. And the very bark of the rainbow eucalyptus tree looks like autumn itself. It’s striped in green, orange, red, gold and purple all year long.

Fall is also a more cost-effective time to visit Hawaii, as most tourists are going back to work or school. The weather is also very mild from September to November, with highs in the mid-70’s. Hawaii’s fall is the season for harvest and food festivals. You can dine on local cuisine amid the plumeria trees and red ginger plants.

FIND & BOOK A HOTEL WITH AAA IN HAWAII.

Due to its extreme range of elevations, the state of California has the longest American foliage season, and the most varied change in fall colors in all of North America. One of the best places to see some of that amazing American foliage is in Yosemite National Park.

Rocky Mountain National Park is full of a wide range of deciduous trees like maple, oak, narrowleaf cottonwood and balsam poplars. However, their most iconic deciduous tree is the quaking aspen, which blankets the park in golden yellow every fall. The thin, round leaves of the aspen shake in the wind, making the tree appear as though it’s quaking.

A great way to see the foliage is by taking a drive down Trail Ridge Road, the highest continuous paved road in North America. With a maximum elevation of 12,180 feet, you’ll be sure to get some breathtaking views. You could also take a kayaking tour through a river canopied with a kaleidoscope of American foliage.

If you want to see the colors at their peak, you’ll have to head to the park in mid-September. During that month you can also attend the nearby Estes Park Autumn Gold Festival, which celebrates fall in the Colorado Rockies.

For fall foliage tours, adventures and more, go to AAA.com/Vacations.

To book a bespoke foliage adventure for yourself, visit AAA.com/Travel.