Adding a luxury Rhine river cruise to your European travel bucket list is a no-brainer for retirees, youngsters and anyone in between. 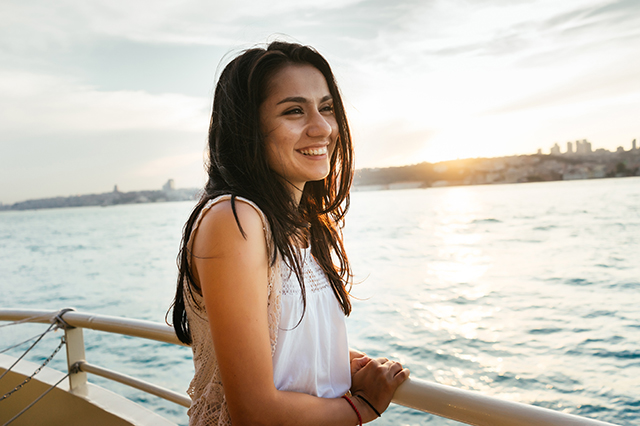 The sun hung low as we crunched along dirt paths between rows of vines at the Schloss Johannisberg winery, light filtering through the green leaves. Each German riesling grape, just forming into clusters in May, was small as the head of a pin. Close up, they looked like asparagus tips. Down the steep hill, the famous river snaked through its valley, a picture-perfect introduction to our luxury Rhine river cruise.

We later had dinner in the estate house, built in 1721, but not before a tour and tasting in the underground vaulted stone cellar, which dates to 1100. Almost 300 years prior to then, the vineyard was ordered to be planted by Charlemagne, the first ruler of the Holy Roman Empire.

The history lesson and meal that followed were a highlight of my time river cruising on the Viking Hlin riverboat, but it was hardly the only surprise for an itinerary that covered four countries in eight days.

If that pace already sounds exhausting, you’d be surprised. Sure, there were more activities and excursions than one could imagine being packed into one trip, but there was enough flexibility built in to allow for the best part of a vacation – doing nothing.

The ship left from Basel, Switzerland, and I had a couple hours to explore before we shoved off not far from the red stone cathedral that rises above the town. The rainy weather was enough to cut my walk short, but it wasn’t a deterrent to the inline skating race I stumbled upon. Lycra-clad competitors in high-performance rollerblades snaked through the historic center with astonishing speed, crouching over with arms swaying like speed skaters in the Winter Olympics.

Back on the boat, I settled into my stateroom, which was sizable for a cruise ship that fits only 190 guests. It had a built-in vanity and space for a separate chair beside the king-size bed. I was greeted with a plate of fruit and a bottle of sparkling wine, and I found other pleasant touches like soft lighting behind the headboard and a heated bathroom floor. The balcony was the best part; a serene perch for watching villages, castles and acres of vineyards glide by.

Life while relaxing on a luxury Rhine river cruise is much different than on a traditional cruise ship because there’s a lot less space to work with. Amenities common to ocean cruise liners like a pool and stage show were missing, but the staff arranged other low-key activities, such as a glass blowing demonstration and a speaker on German culture. Another big difference on a river is that there’s also a lot less distance to cover, so the ship felt much more connected to each destination.

A wealth of excursions

We docked the first morning in Breisach, a storybook German village that was nearly flattened in World War II. I wandered up a hill to the 15th-century St. Stephen Cathedral for a view past the pitched roofs of the rebuilt pastel buildings and far into the vast green of the Black Forest. The town was small enough to cover on foot in less than an hour, leaving plenty of time to return to the ship for lunch and the optional afternoon excursion to Colmar, France.

During the half-hour bus ride to Colmar, the guide breezed through more than two millennia of history of the Alsace region, which has been known for its light, white wines since the Romans established it as a center for viticulture. The village’s half-timbered houses leaned on each other and over the cobbled streets, flower boxes brimming with pink, purple and yellow blooms that hung over the canal that cuts through town where tourists took lazy rides in low-sided wooden boats, ducking under footbridges along the way. On my way back to the bus, I stopped for macarons at a pastry shop and watched the elderly ladies lean on their canes as they took afternoon walks.

The day provided a good example of what to expect from the rest of the week on my luxury Rhine river cruise, which included stops in Strasbourg, France; Koblenz, Heidelberg, and Cologne, Germany; and Kinderdijk, Netherlands before docking in Amsterdam. Each day included one free excursion, generally a bus or walking tour with a guide who cracked innocent jokes while giving a history lesson. Passengers also received some free time in each port, allowing for that kind of aimless wandering through back lanes and tangled alleys that often defines a trip to Europe.

Each port had at least one optional excursion, sometimes up to three. Activities ranged from a few-hour cheese making and windmill tour in the Netherlands, to a full-day Taste of Alsace feast that visited several culinary spots in Strasbourg, parts of which could have doubled as that little town full of little people in “Beauty and the Beast,” in both appearance and temperament. While I was grabbing a quick coffee and croissant that morning, two different people bid me an unprompted bonjour! and took note of my petit dejeuner.

Enormous bounty at the river’s edge

River cruising can work up an appetite. Then again, the hours of wandering each day were necessary for burning off multicourse meals for breakfast, lunch and dinner. The staff delivered on its fine-dining promises with service to match, amiably handling a casual meal in the upstairs Aquavit Terrace with the same attention as was standard in the dining room.

Breakfast featured made-to-order omelets or eggs Benedict, along with a buffet with a selection of meaty side dishes, cereals, pastries, fruit and desserts. I mustered the strength to skip the daily mimosa bar.

Lunch and dinner were both such feasts that the distinction between the two was often lost on me but for the time of day. One delicious meal blended into the next. A starter of goat cheese custard was followed by a savory brisket served with potato puree and a red wine demi-glace and finished with a rich chocolate torte. The lighter options didn’t aim any lower. Consommé with Asian slaw, for example, came with curried chicken salad and berry crumble.

The premium wine selection included with the Silver Spirits package changed depending on the country we were visiting, sometimes an Alsatian pinot gris, at other times a dry German reisling. Curiously, the house red and white were Argentinian, though satisfying all the same. Without a doubt, you want to splurge for the wine package on a Rhine riverboat cruise. It will not disappoint.

Once dinner wrapped up, we inevitably filtered into the lounge, where the well-trained bartenders learned your name in one try and managed to mix a mean Old Fashioned. What was lacking in big ship entertainment was made up with in enthusiasm from Gigi, the Romanian piano player with an accent like Dracula but the singing voice of Neil Diamond. He turned out hits like an adult contemporary radio station and got the crowd dancing, even if the lyrics didn’t quite come out as written each time.

Room with a view

As the week wore on, we left Cologne and its cathedral – a marvel of Gothic architecture and one of the largest in the world, and the schedule was adjusted from traveling at night to cruising during the daytime. The Rhine began to narrow among massive hills shooting straight from the water, juking back and forth at such a clip we were practically surrounded by the terrain. At some points, it was as if the boat would head straight into a wall of forest.

Riverside villages, comprised almost universally of about 50 buildings and a church spire, squeezed into the valleys between the hills. Every few miles a citadel in various states of repair would appear above a rocky outcropping, a sign of the power bestowed upon those who controlled the storied river over the centuries.

As I stood on the rooftop terrace, crows cawed, loons honked and finches twittered as the ship inched closer to the magnificent Marksburg Castle. The yellow stone fortress, with turrets capped in black slate, beckoned as if from a fairy tale. Surely, an imprisoned maiden was awaiting her hero prince in one of the towers.

By the time we docked in an industrial area of Amsterdam the last day, I was struggling to decide whether it was worth it to taxi into town for an hour before I had to catch my flight. The front desk attendant convinced me that would be cutting it close.

“Well,” she said, “that gives you a reason to come back, right?”