Weekend in Saratoga Springs: Things to Do and Where to Stay

If you’re off to the races anytime soon, you’ll be glad to have this guide to Saratoga Springs handy.

0 COMMENTS
Road Trips » Weekend in Saratoga Springs: Things to Do and Where to Stay 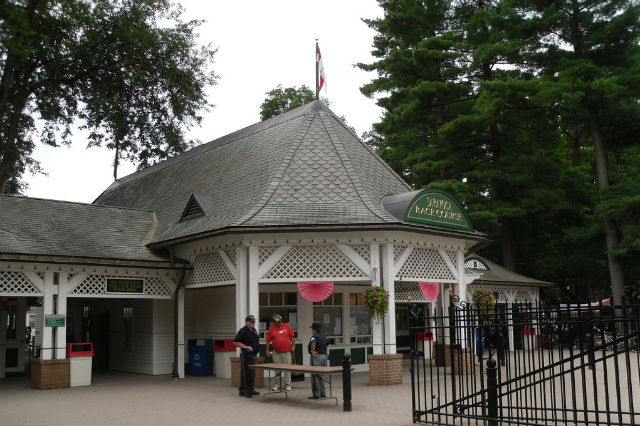 “Got any hot tips?” is a phrase you’ll hear around Saratoga Springs, N.Y., during racing season and it seems just about everybody you ask, does indeed, have a tip on a horse that’s a sure thing. Winnie’s Flower in the 3rd or Golden Touch in the 8th. OK, I just made those up but you get the idea. But the best tip I received was from a friend, a frequent visitor to the area, who advised me to take time to explore all that Saratoga has to offer – yes, a day at the track is an absolute must but this historic city, less than an hour from Albany, also has healing mineral springs, a major Revolutionary War battlefield and a buzzing downtown with a rockin’ live music scene. I planned to see it all, and over one jam-packed weekend last August, I did just that – or made a valiant attempt to.

A 1 p.m. reservation was made at the Turf Terrace – perhaps the fanciest of the many dining options at Saratoga Race Course, dating from 1863, making it one of the oldest tracks in the country. My traveling companion and I could have watched the races from the Grandstand or brought a cooler to have a picnic on the grounds but, I figured, why not go all out? The Terrace crowd was very Blue Blood-y, lots of Blue Blazers on the gents and Big Hats on the ladies. I kept an eye out for the Queen of Saratoga, socialite and philanthropist Marylou Whitney, who at 89 still makes track appearances but, alas, no sightings this day.

As we dined on shrimp cocktails and cheese plates and sipped chilled wine from our prime table overlooking the finish line (Golden Touch, by a nose?), we’d periodically make our way up to the window to place our bets. Lady Luck seemed to be with me as I won a few races – hit an exacta and a trifecta…not bad for a novice! For the last few races (there were 12 in all), we headed to the Clubhouse’s ground level where we could get right up to the fence, joining the folks hooting and hollering as the majestic thoroughbreds zoomed by. Between lunch and the losses I suppose I broke even on the day but no matter, it was well worth it to experience a day at “The Spa.”

Our hotel was the stylish Pavilion Grand, an all-suite boutique steps from the town’s main drag, Broadway. Its 48 rooms – probably the largest in all of Saratoga – feature kitchens, modernist artwork, leather armchairs and massive flatscreens (during racing season the gorgeous penthouse loft suites with either private terraces or rooftop gardens are the most sought-after rooms). Nearby, we strolled along Broadway, passing wine bars, boutiques and a hat shop called Hatsational (so that’s where they get them!). We had a martini at 9 Maple Avenue, a fabulous speakeasy-style hole-in-the-wall with live jazz. For more raucous bands – and a guarantee that at some point you will be singing along to “Livin’ on a Prayer” – hit the Caroline Street bars.

After breakfast at the Triangle Diner, a local Maple Avenue spot, we headed off to Saratoga National Historical Park in nearby Stillwater, passing rich farmland and patchwork quilt landscapes along the way. If you remember your history lessons (and I certainly had to brush up on mine), this is where, in 1777, the tide of the Revolutionary War turned in America’s favor after the defeat of General Burgoyne by generals Gates and Arnold (as in Benedict) during the Battles of Saratoga. Operated by the National Park Service, you can take a 10-stop self-guided driving/biking tour to see the former farms and fields that saw battle as well as the Neilson House (Arnold’s quarters), the sole surviving structure from that time. I got chills just thinking of this spot’s importance to our nation, yet it made me sad to see so few people there.

As the weekend drew to a close, I thought, what better way to cap off a visit to Saratoga Springs then to sample the actual waters the area is known and named for? Once home to more than 100 mineral springs, today only 17 remain but one can still “take the waters.” After overnighting at the Gideon Putnam, the historic grande dame hotel located within Saratoga Spa State Park, I booked a mineral bath at its Roosevelt Baths & Spa. The naturally carbonated water—cold when captured from a natural underground spring then mixed with warm – was a blissful 97 degrees, an absolutely ideal bathing temperature. I soaked for 45 minutes; afterward, I felt relaxed, invigorated. And after my action-packed weekend, allow me to offer my own hot tip: If you haven’t yet experienced Saratoga Springs, make this the year to do it.

Got any hot tips about Saratoga Springs, N.Y.? Let us know in the comments!

Plan your own weekend in Saratoga Springs with AAA.