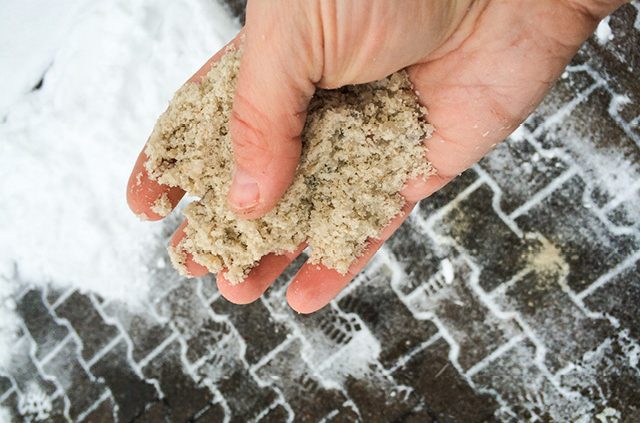 As soon as the first snowflake falls, homeowners are already thinking about how to remove the ice and snow from their property.

But did you know that ice melt, especially rock salt, can damage your outdoor surfaces?

Here is our guide to the most common forms of ice melt, and the pros and cons of each, according to Consumer Reports.

This is the fastest-acting ice melt of the bunch. If you’re a homeowner in a time crunch, this is the ice melt for you. But be cautious – calcium chloride can harm grass and plants when over-applied, and can cause minimal to moderate damage to asphalt and concrete.

Also known as rock salt, sodium chloride is the most common – and inexpensive – choice. But it’s also the most likely to damage your concrete, asphalt, wooden, brick, stone and metal surfaces. It’s especially dangerous to newer concrete; Consumer Reports recommends that you don’t use rock salt on concrete less than 1 year old. In addition, rock salt is lethal to pets if ingested.

This is another ice melt to use if you’re pressed for time. It’s environmentally-friendly, safer for pets and more effective than rock salt. However, magnesium chloride can cause even more damage to asphalt or concrete than rock salt.

Pet owners often choose potassium chloride because it’s one of the safer ice melt options. As far as benefits go, potassium chloride is more or less the same as magnesium chloride, but safer for your asphalt and concrete. However, exercise caution if you have a pet with kidney disease; ingesting this ice melt can be lethal to pets that suffer from the disease.

This is also a common choice for pet owners. It’s also the least likely to cause damage to your asphalt or concrete, and one of the most inexpensive options next to rock salt. However, it’s the least effective – with urea, you sacrifice efficiency for caution.

Protect your home with homeowners insurance from AAA.