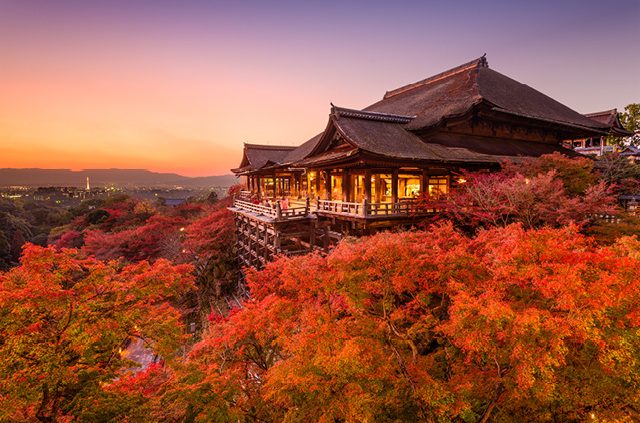 I had been looking forward to visiting Kyoto during my entire tour of Japan.

The former imperial capital of Japan is now considered the country’s cultural capital. Throughout the years, Kyoto has tried to preserve its incredible historical heritage while, at the same time, growing into a modern and vibrant city. I was ready to explore that strange contrast – the balance between the modern and the historical – as soon as I stepped off the train.

Kyoto is bright, clean, and inviting, like almost every location in Japan. It looks very much like Tokyo, even if the buildings don’t reach quite as high into the sky. Our tour manager told us that just under the surface ancient tradition could be found, and so I set out to find it.

The gardens at Nijo Castle in Kyoto. (Japan Image / Shutterstock)

The first stop was Nijo Castle. Not only is this sprawling fortress the home of the first shogun, it’s also one of 17 historic monuments of ancient Kyoto. All are UNESCO World Heritage Sites, which means they are regarded as special places in the world and carefully protected and preserved. Nijo is unique because it is the only castle among them; the rest are shrines and temples.

It’s also unique because of its nightingale floors, the legendary architectural marvel that kept the shogun safe while he slept. You can’t cross the floors without making the floorboards squeak, or sing like a nightingale, and so no one could sneak up on the sleeping shogun, whose bed was squarely in the center of the wide floor.

After Nijo Castle, we left the city for a temple. Growing up in New England, I thought I knew the beauty of autumn since I had seen so many crisp, colorful falls. Standing on the wooden deck of the Kiyomizu-dera Temple, looking out over Kyoto, I realized how wrong I was. I felt like I had never seen reds, yellows and oranges this vibrant in all my life.

Kiyomizu-dera Temple sits atop a hill, and from its balconies you can see over the colorful sea of treetops and take in all of Kyoto at once. It’s an awe-inspiring sight, magnified by the shimmering colors of the changing leaves.

We left Kiyomizu for the Fushimi Inari Taisha Shrine. There, I found something vibrant enough to rival the fiery oranges of the autumn leaves: the crimson-colored torii gates that line the path through the forest to the inner temple. Stone fox statues crouched everywhere around the shrine. We found out later that foxes were thought to be messengers for the gods.

Walking through the mountain paths, under the torii gates, I discovered a smaller shrine. This was a sub-shrine, I found out later, and there were three more scattered across the mountain. Some were so far away that the hike there would have taken two hours, and the sun was dipping down behind the autumn trees. I decided heading to the base of the mountain was the smartest course of action.

The next morning, I took a train to Hiroshima and explored the Peace Memorial Museum before returning to Kyoto. After the modern ride in a bullet train to Hiroshima and back, coming back to Kyoto felt like traveling in time. The city is so quiet, filled with shrines and temples and gardens, that you can’t help but let the tranquility wash over you. It’s easy to find a bench and watch the falling Japanese maple leaves swirl in the wind.

Noodles and dumplings in Kyoto

I had the evening free, so I decided to just walk the streets of Kyoto and simply follow wherever my feet took me. I thought I was following my feet, but I ended up following my nose, instead. The savory scent of ramen led me into a small noddle shop, where I sat and ate delicious pork and noodles in broth, along with some tasty dumplings. It was a crisp, cool evening, and the steaming ramen warmed me up.

A geisha strolls down a street in Kyoto’s Gion District. (Juri Pozzi / Shutterstock)

The Gion District and geisha

The Gion District was magical, watching traditionally dressed geisha meander down the cobblestone streets under paper lanterns. Every narrow alleyway seemed to hold a secret teahouse, and every park seemed to hold an ancient shrine. There was a weight of history and tradition and culture everywhere.

The geisha that walked the streets, however, weren’t geisha at all. Some were maiko, geisha-in-training who are learning the craft of being one of the elite entertainers. Some are simply women in costumes, posing with tourists. Kyoto has the highest concentration of geisha in Japan, but there are less than 100 in the whole city, and they almost never walk the streets. Instead, they play instruments and sing in quiet, personal ceremonies.

As night fell, I heard drumming and shouting. The 300-year-old Nihonmatsu Lantern Festival had begun, with torch-bearing men marching down the street, singing and chanting to the beat of drums. As it got darker, I saw the lantern floats: huge wooden structures lit with hundreds of paper lamps that slowly sailed down the streets as the drums thundered on. The floats spun as dancers jumped wildly atop them. I watched in awe as the party – one of Japan’s largest lantern festivals – continued into the night.

Japan through the seasons

Each season in Japan has a special flair all its own. In fall, the vivid landscape and cooler temperatures beckon. You can watch the snow fall gently outside while taking part in a tea ceremony in the winter, or walk through the parks in spring as cherry blossoms swirl and blanket the ground in a pink-hued carpet. In the summer, you can catch the world-famous parade of the Gion Matsuri Festival as people pack the sunny streets.

There’s always something to do in the Land of the Rising Sun. I was already mentally planning for my next trip to Japan, and I hadn’t even left yet.

FIND & BOOK A HOTEL IN KYOTO