America’s Byways: Sights Along Some Historic and Scenic Routes 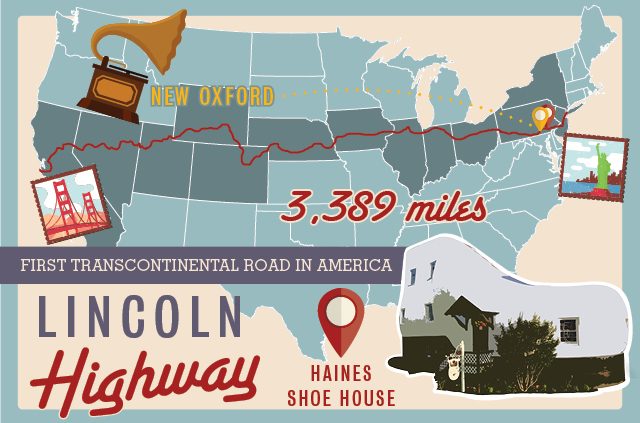 Established in 1913, the Lincoln Highway was the first transcontinental road in America. It runs 3,389 miles from Times Square in Manhattan to Lincoln Park in San Francisco, Calif.

Roads built America, but many of the country’s first roads – like the Lincoln Highway from New York City to San Francisco – have been eschewed by motorists for the zoom of interstates. America’s Byways is a federal designation for 150 routes across the country.

There are thousands of miles of historic and scenic roads across America that are part of our national heritage. Each one of them gives you a glimpse of our country in its own special style.

My route includes stretches of some of the longest and most legendary roads in the country.

Known also as “The Mother Road,” “The Main Street of America,” and “Will Rogers Highway,” the iconic Route 66 was established in 1926. It runs 2,451 miles between Chicago, Ill., and Santa Monica, Calif., by way of Missouri, Kansas, Oklahoma, Texas, New Mexico and Arizona. Rerouted several times, only about 85 percent of it is drivable today.

Construction on Historic National Road began in 1811. It was the nation’s first federally funded interstate highway. At 621.4 miles it spans from Cumberland, Md., to Vandalia, Ill., going through West Virginia, Pennsylvania, Ohio and Indiana.

Recommended Detour: Ohio Small-Town Museum, Ashville, Ohio. Quintessential small-town, right down to the locals who still hang out in the former barber shop. There’s an amazing collection (including a rocket-like stoplight prototype) and worth the 30-minute drive from the Historic National Road in Columbus, Ohio.

Created in 1938, Great River Road follows the Mississippi River for 2,069 miles in a collection of state and local roads. It passes through 10 states and hundreds of river towns on its way from northern Minnesota to the Gulf of Mexico.

Construction on the Natchez Trace Parkway began in 1937. Its 444 miles follow the “Old Natchez Trace,” a historic corridor in use for more than 10,000 years. Running through Alabama, Mississippi and Tennessee, the parkway is part of the U.S. national parks system.

Recommended Detour: Ivy Green, Helen Keller’s childhood home in Tuscumbia, Ala., is a 20-minute drive from Florence, Ala., off the Natchez Trace. Be ready for goosebumps and a few tears at this moving and inspiring house-museum. On your way, you can also stop at the Key Underwood Coon Dog Memorial Graveyard in Colbert County, Ala.