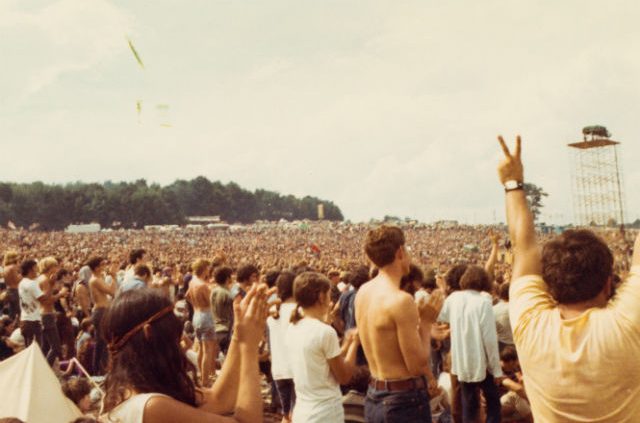 This summer marks 50 years since the “three days of peace and music” that gave us some of the most iconic moments in music history, like Richie Havens improvising “Freedom” and Jimi Hendrix reinventing the national anthem. At the site of the Woodstock festival, Bethel Woods Center for the Arts keeps the spirit of creativity and self-expression alive. It is celebrating the golden anniversary with programs including special exhibits and the opening of the restored Bindy Bazaar trails.

Over 400,000 concert-goers attended the 1969 festival in Bethel, New York, and on their way between two of the main grounds, they traveled on a network of trails that served as a marketplace featuring exotic goods, crafts and clothing. As one of its main preservation projects, Bethel Woods recreated the Bindy Bazaar trails through the wooded area west of the festival field. For the first time, guests can experience the trails restored to their original state and see historic evidence of the market, which included 20 vendor booths.

The first phase of the restoration will open May 4. Visitors that journey through the trails can imagine being swept up in the vibe of peace, love and music or reflect on the ideals of the 1960s, which are a focus of The Museum at Bethel Woods. Since the nonprofit cultural center stewards both the land and legacy of Woodstock, either would be in keeping with its mission.  Museum exhibits are aimed at encouraging new generations to find their own way of changing the world through positive social engagement and music.

When The Museum reopens for the season on March 30, visitors can explore the vision the youth of 1969 had for their world and consider their own today. We Are Golden: Reflections on the 50th Anniversary of the Woodstock Festival and Aspirations for a Peaceful Future encourages new generations to examine their efforts to promote social change and peaceful civic dialogue.

With roots in the 1960s, movements for the LGBTQ community, women’s rights, environmental protection and social justice issues are among those in which youth have played a role. Looking back further in time, concerts such as Farm Aid and the Concert for Bangladesh were inspired by Woodstock and the way its music unified attendees. These events reflected a shared vision of a better world.  As Joan Baez declared at Live Aid, the 1985 benefit concert for famine relief in Ethiopia, “This is your Woodstock.”

While there is a psychedelic bus and plenty of memorabilia including posters and jewelry in the museum’s permanent collection, the artifacts are intended to inspire more than nostalgia. Film footage and period photographs put visitors of all ages in the heart of the Woodstock experience, while We are Golden takes them further into the social context of the three-day festival where singer-songwriters like Joan Baez championed social change as much as creative expression.

Certainly, some found Woodstock to be strictly a music experience, albeit a legendary one, with performers including Janis Joplin, Santana and Crosby, Stills, Nash & Young.  Others remember an event typified by massive puddles of mud and even more massive traffic jams. Though Arlo Guthrie’s announcement that “the New York State Thruway is closed, man” wasn’t true, as only a few exits were closed, miles of traffic through Catskills towns made it feel that way.

In conveying the significance of Woodstock, Bethel Woods celebrates both the music and the cultural impact of the iconic gathering with aims to rekindle its spirit in the present. Located 90 miles northwest of New York City on the very spot where the event took place, it has a special role interpreting this anniversary. The site has officially been placed on the National Register of Historic Places in recognition of its importance to American History.

Through a special exhibit entitled We Are Stardust, Bethel Woods puts Woodstock in the context of other landmark 1969 movements. Those who attended the festival lived through a tumultuous decade in which the Vietnam War, Stonewall riots, Watts riots and the assassinations of both President John F. Kennedy and Martin Luther King Jr. occurred.  These pivotal events and others led to a call for change and a push toward peace and unity. 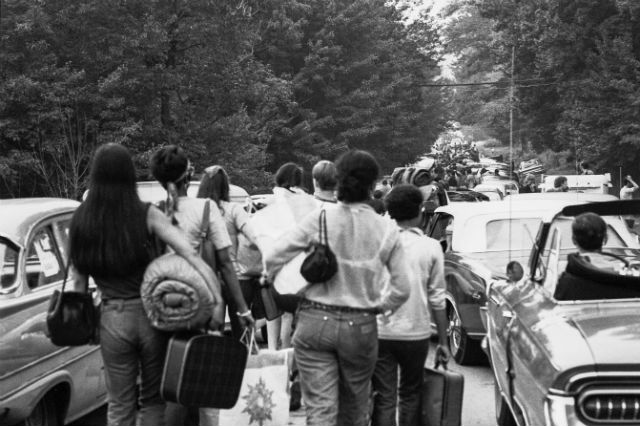 Also contributing to the tension of the times was the Cold War space race between the U.S.S.R. and U.S., which was lagging behind the Soviet superpower.  On July 20, 1969, just weeks before the Woodstock festival, that was all about to change. With the landing of Apollo 11, astronauts Neil Armstrong and Buzz Aldrin marked the fulfillment of President Kennedy’s goal of landing a man on the moon. In less than ten years, the U.S. skyrocketed ahead of its competition, satisfying and sparking yet even more “moon mania” in Americans who were fascinated with the limitless frontier of space.

We Are Stardust features objects and interpretation of the events leading up to the lunar landing, encouraging Bethel Woods visitors to delve into the historical significance of this pivotal 1969 event and its impact on those who would make up the festival crowd. The exhibit will be held from March 30 to December 31 in the Crossroads Exhibit Gallery. During the Lunar Weekend from May 17 to 19, Bethel Woods will be offering films, hands-on activities, speakers and activities focused on the profound impact of the lunar landing on American culture.

Throughout the 2019 season, Bethel Woods also will host a series of live discussions and workshops entitled Vibrations, in which artists and change-makers will reflect on what the spirit of Woodstock means to us today. These shared experiences are intended to promote open conversations about the future and reignite a commitment to peace and civility.

At the very spot in the Catskills where Woodstock took place, there may be no better place to find inspiration in its legacy.

For a full schedule of events including performances and film screenings, visit www.bethelwoodscenter.org.