Two inspiring individuals are honored for their work to keep our roads safer. 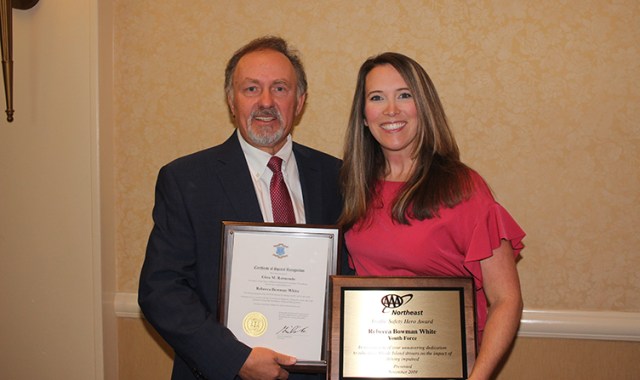 AAA Northeast honored Rebecca Bowman White and Cathy Andreozzi as Rhode Island Traffic Safety Heroes of the year in 2019 for their work advocating against the dangers of impaired driving.

It’s a story Rebecca Bowman White has told time and time again: don’t drink and drive and always wear a seat belt. White knows a tragedy on the road could be just one decision away since she experienced firsthand the consequences of drunken driving. What was supposed to be a normal Friday evening turned out to be life-changing.

On Oct. 29, 1999, White had just celebrated her 14th birthday and was headed to the mall with her mother and best friend when their car was struck from behind by a drunken driver. White was the sole survivor of the crash that killed her mother, Marsha Bowman, and her best friend, Katie DeCubellis. White says she was in a complete state of shock for months following the crash.

It wasn’t until she saw an episode of “The Oprah Winfrey Show” that she was able to find the strength to share her story. Seeing another victim of a drunken driving crash who had forgiven the driver inspired her to do the same, which White says was a defining moment. Since then, White has traveled to schools across New England, sharing her powerful story and guidelines for living a happier life. In 2011, she spoke about the power of forgiveness and how it’s impacted her life on the 20th anniversary special of “The Oprah Winfrey Show.”

Rebecca on Oprah as an ultimate viewer from Rebecca White on Vimeo.

For White, being able to share her story and raise awareness about the dangers of drunk driving is an opportunity to potentially save a life and prevent more crashes from happening. In her presentation, “Five Simple Guidelines,” White discusses her approach to life using five guidelines.

“It’s a humbling feeling to be honored by AAA,” White said. “I always say that I have the best job, because I don’t consider it a job. I really feel like this is what I was meant to do, and I enjoy working with and helping the youth to prevent crashes from happening on the road.”

Cathy Andreozzi remembers the day things changed forever. Back in 2003, her daughter, Tori, had a promising future in martial arts and a close group of friends. While walking home from school with her brother, Tori’s life was dramatically altered when she was struck from behind by a drunken driver who fled the scene. While Tori survived, she suffered a severe brain injury that has left her in a minimally conscious state. Since the crash, Andreozzi has been Tori’s primary caretaker and has carried on her daughter’s spirit by starting the Tori Lynn Andreozzi Foundation. The nonprofit organization aims to educate young people on the impact of drugs and alcohol as well as support victims and their families. The foundation recently teamed up with the Herren Project to inform students that drugs are just as big of a risk as alcohol.

“I’m very grateful to be recognized among an incredible group of passionate people,” Andreozzi said. “It’s our responsibility as individuals to step up and play a part in keeping each other safe.”

Andreozzi has kept her daughter’s schedule busy with activities including wheelchair ballroom dance lessons. She says a big role in Tori’s development has been her visits to the local YMCA where she exercises using a functional electrical stimulation bike. The machine is designed to improve the cardiovascular health of patients with neurological and spinal injuries.

“The FES bike does something for your circulatory system and your soul and it’s changed her life,” Andreozzi said.

To give back for all the FES bike has done for Tori, Andreozzi worked with local partners and played an instrumental role in organizing last year’s second annual Dancing Under the Stars Gala, a dance competition featuring community leaders. During the event, Tori made an appearance on the dance floor as the fundraiser received donations to help toward the purchase of a new FES bike. Andreozzi said the event was one of many ways her daughter is able to show her gratitude for everyone who has supported her before and after the crash.

“It came to me that Tori would want to pay this forward,” she said. “Before the crash, Tori always talked about getting back into dance, and I promised her we would find a way. She always loved giving back, and the fundraiser is one way she is able to do so.”

Both Bowman White’s and Andreozzi’s stories have been featured in the “Ripple Effect,” a digital campaign by the Rhode Island Department of Transportation that shows the tragic consequences of drunken driving. They both believe it’s important to teach kids how to make the right choices in life, especially behind the wheel. White currently works as the program coordinator for Youth Force, a program set up by Rhode Island Department of Transportation where guest speakers meet with students about the dangers of impaired driving.

“It’s great for the families that are involved because they get to see how the youth of Rhode Island cares and are trying to make a difference when it comes to traffic safety,” White said.

Both White and Andreozzi say they will continue to spread awareness about the dangers of impaired driving in honor of their loved ones.

“The crash showed us the worst humanity has to offer, but it also showed us the best in how people can rally together around an individual in need or a common cause for the greater good,” White said. “I’ve met so many compassionate and driven people along the way. Working with young people has given me more hope that the future really is in good hands.”