With HBO’s hit miniseries “Chernobyl” putting it back on the map, Chernobyl tourism has never been so popular. But is that a good thing? 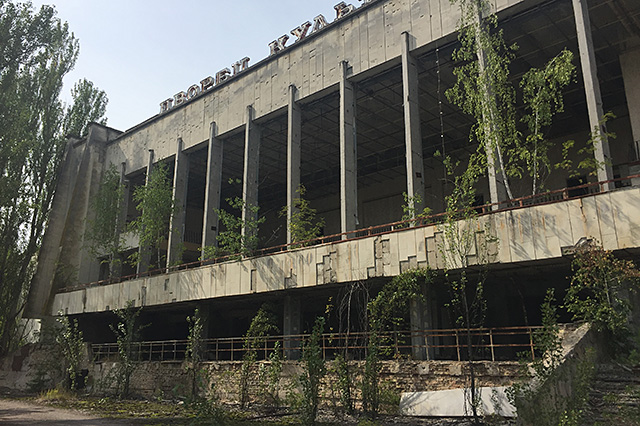 To be honest, it’s fairly thrilling to roll into Chernobyl’s Exclusion Zone. Having ridden north from Kiev in a minibus over a two-lane road, we arrive at a checkpoint.

Authorities examine our passports, then admit us into an area that encompasses some 1,000 square miles, set 30 miles away from Chernobyl Power Plant’s destroyed reactor four. Inside stands the husks and hulks of some 200 former villages and towns, which now feel like a post-apocalyptic place. In all, about 200,000 people were evacuated.

“And no one will ever live here again,” our guide Anastasia, clad in fatigues, tells us.

Tours to this disaster site have never been more popular, with HBO’s hit miniseries “Chernobyl” putting the place back on the map – and boosting visitor numbers dramatically. Local tour operators, who typically run one-day tours to the site (which sits about 75 miles north of Kiev) are reporting a significant bump in bookings, increasing some 30-40% since the show started airing. Tours cost about $100 and usually include a simple lunch in a local canteen.

A Different Sort of Day Trip

The background: on April 26, 1986 an accident during a test on reactor four at a nuclear power plant sparked a fire and a meltdown, releasing unprecedented amounts of radioactive material. Soviet authorities eventually evacuated everyone within the Exclusion Zone. A fallout cloud drifted across Europe and between the initial trauma and continuing effects of radiation, thousands died (how many, exactly, is subject to debate).

My visit, which predated the television series, began in Kiev’s Independence Square where I joined a group of about a dozen people for the two-hour drive north. I was in the country to check it out as a tourism destination: Ukraine’s capital city sports a soaring skyline, interesting museums, monument-filled parks and restaurants that serve the best perogies, vodka and chicken Kiev in Eastern Europe. And from the capital many visitors are now adding a trip to Chernobyl to their itineraries.

Vincent Rees, who owns Cobblestone Freeway, a tour company based in Canada and Ukraine, says his phone has been ringing off the hook since the TV series started airing. Although he admits that a lot of those calls have been from journalists like me. But when it’s guests calling to book a trip, many wonder, is it safe to visit Chernobyl? “The radiation question – that’s always the first thing people ask,” he said. Experts seem to agree that in most spots, including all places on tour itineraries, the radiation has dropped to safe levels. Ukrainian President Volodymyr Zelensky just announced plans to turn Chernobyl into an official tourist attraction, a move likely to draw more visitors to the area.

But others aren’t so sure. Some question the ethics of visiting the site of the world’s worst nuclear disaster, where so many died and where the course of so many lives was altered.

As the minibus passes deeper into the Exclusion Zone, which runs along the northern border with Belarus, guides give a list of fairly commonsense rules: Don’t eat any plants or drink from water sources, and avoid sitting on the ground. We stop at reactor four, now enclosed in a protective dome, taking photos in front of it. In the wake of the show’s airing, social media influencers have descended on the site, in some cases taking inappropriate photos­ – including modelesque selfies – in front of hollowed out buildings and abandoned fun parks. It all prompted Craig Mazin, creator and executive producer of the HBO show, to ask people to “please remember that a terrible tragedy occurred there. Comport yourselves with respect for all who suffered and sacrificed.”

On my tour, we proceed through the sites with a mixture of awe and horror. The Ukrainians I spoke with while traveling in the country ranged from ambivalence to anger about the accident. Because it occurred during the Soviet Union era, a sense of blame persists. (Russians have expressed displeasure at their depiction in the HBO series, and plans are underway to make their own version.) And while some would prefer not to shine a light on it, some Ukrainians told me that they were pleased Chernobyl tours were helping produce a bump in tourism.

“Most of us feel resentment, annoyance, fear and grief,” Tanya Bakbardina, a client manager with Cobblestone Freeway, tells me in an interview after my visit. “It’s because this catastrophe affected the life and health of not only those who caught this tragedy or was an eyewitness, but also those who were born after 1986.”

Bakbardina adds that the feelings tend to split down age-based lines. For older generations, some of whom have suffered ongoing health problems, the anger still boils. (She admits that tour companies offering itineraries to Chernobyl sometimes take some heat from these Ukrainians.) But young people in the country – like the tourists who visit – are attracted to Chernobyl by their curiosity, detached by time from the actual event. “In this, they see romance, and dangers pleasantly tickle their nerves,” she said.

After the reactor we have a look at the “red forest,” a stretch of radiation-scorched woodland. As we enter Pripyat – a purpose-built city to house workers at the nuclear plant, which was once home to some 50,000 people – it feels like a city of ghosts. We wind through an amusement park now frozen in time, grass curling up through cracks between the bumper cars, a yellow Ferris wheel – now an icon of the town – rusted and perpetually halted.

We pass restaurants, hotels, supermarkets and restaurants. Their hollow-eyed windows all staring at us, black and empty, then proceed through the Palace of Culture. The wooden floors of its once-fine gymnasium now wrecked, the pool emptied out. It’s all sad, but – more than that – eerie, as if you can still hear just the slightest whisper of the vibrant life that once surged through this place.

We finish by climbing to the top of a 15-story apartment building and walking around on the roof, with sweeping views of the destruction: a forest, sprouting all throughout the city, returning it all to nature, and the phantom of reactor four on the horizon. It’s all very green, and very melancholy.

But for Tanya Bakbardina, this view inspires hope.

“One lesson, for me, is that nature will survive even after the apocalypse,” she tells me later, adding that Ukraine continues to face a choice with how to deal with the aftermath of Chernobyl. “The Zone has two ways – to be forgotten or to be famous,” she said. “We chose the second way – the preservation of the memory of the heroes, whose action or inaction saved the world.”

Would you visit Chernobyl? Tell us in the comments.

If you love adventure, discover and book your next trip with AAA Club Adventures.