Happy (Ice Cream) Trails to You

Enjoy summer’s favorite frozen treat by following one of these flavor-packed ice cream trails in the Northeast. 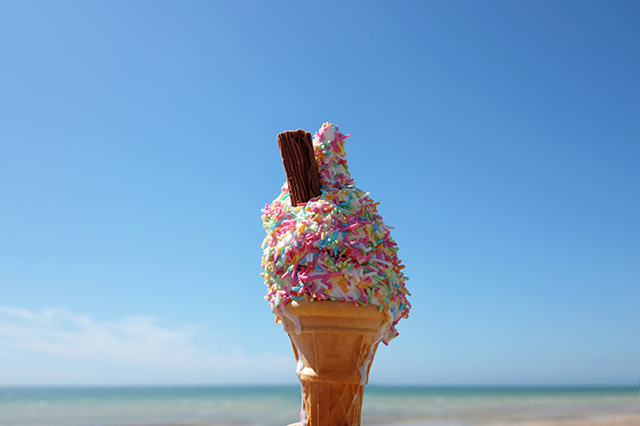 July is National Ice Cream month, proclaimed by President Ronald Reagan in 1984 with a little help from the International Dairy Foods Association. The group reports that’s the busiest time for ice cream producers, also noting that the average American puts away more than 20 pounds of the icy dessert each year.

Which gives you the perfect midsummer excuse to indulge yourself – the rest of the year you’ll have to come up with other reasons. Check out these delectable ice cream itineraries to find your favorite flavor.

Rhode Island’s Blackstone Valley may have birthed the Industrial Revolution, but today, momentous change occurs the day ice cream shops open for the season. Wind your way through four stops to sample mounds of glacial goodness.

Family-run Lincoln Creamery offers 50 kinds of hard and soft ice cream plus frozen yogurt to its Front Street Faithful, as well as a rewards program. Proceed north to Josie’s in Cumberland for popular froyo flavors Southern bourbon pecan and uber creamy chocolate Nutella. Across the street from Smithfield’s Waterman Reservoir is Powder Mill Creamery, where you can sit yourself down on a shady picnic table to keep your scrumptious sweet from melting too fast.

Round out your chilly pursuit by visiting Wright’s Dairy Farm & Bakery in North Smithfield, an honest-to-goodness working farm where milk goes from cow to bottle within 24 hours. You can watch the milking daily from 3-4:30 p.m., ooh and ahh over the cute calves, then take a cellphone tour of the farmstead. End up at the bakery and just try to resist its mouthwatering pastries, not to mention the ice cream pints, quarts, and sandwiches in the freezer. If you still have room, get a cow-to-cone creation from the seasonal Scoop Trailer, which operates out of a restored 1966 Streamline. A second trailer is located on Water Street in Warren.

New York’s diverse regions give rise to a range of ice cream paths. Adirondacks, USA, has a self-guided Ice Cream Trail for the southern, eastern, northern and High Peaks districts. Some advice: Eat a good breakfast and pace yourself. Further west, Step Out Buffalo recommends a gratifying two-fer, a Candy & Ice Cream Shop Trail featuring nine locales in and around that city, several of which have that old-timey ice cream parlor feeling.

Long Islanders can follow a 15-hour excursion from the Queens border to Southampton, plotted out by Foursquare. In Manhattan, opt for Sugartooth Tour’s Ice Cream Tour of NYC, conducted five times every Sunday from June through September. (FYI: The city’s Museum of Ice Cream is not a museum in the traditional sense. While it does give out scoops and other delicacies, and has an immersive “sprinkle pool” with around one million nonedible pieces, it’s more of an interactive play space with multisensory installations.)

Be sure to detour to Brooklyn’s Red Hook section to drop in on the borough’s largest ice cream facility, Ample Hills Creamery, and its family-friendly interactive museum.

New Jersey has about 39,000 miles of public roadways, meaning there’s lots of ground to cover in a quest for frosty treats. Begin at Van Dyk’s Homemade Ice Cream, a fixture in Ridgewood for over 40 years (be forewarned: It’s cash only), then swing over to Jersey City’s Torico for ice cream pies and slices in flavors that reflect the community’s diverse cultures (dulce de leche, anyone?). Proceed west to get your licks on Route 46 in Ledgewood at Cliff’s. The 60-plus choices include Morris County mud and holy cannoli.

Continue south to Magnifico’s in East Brunswick for soft serve or a nondairy/gluten-free/vegan pineapple Dole Whip. Charming Lambertville, on the Delaware River across from Pennsylvania, is the place to taste Owowcow’s locally sourced cool confections, consisting of core flavors, monthly specials and seasonal selections. Finally, head down the Shore to quaint Stone Harbor, sandwiched between the Intracoastal Waterway and the Atlantic Ocean. At Springer’s, pick up an intriguing combo – an ice cream doughnut – and stroll the sand to watch the sunset.

“If you can ride a bike and like ice cream, there’s a ride for you,” vow the organizers of the Massachusetts South Coast’s Tour de Creme, which will come racing back in May 2023. Cycle-and-slurp routes are 11, 19, 25 and 50 miles, depending on just how much you want to pedal – and consume, from a surprising number of creameries (the exercise negates the calories, right?). All tours begin at the Mattapoisett Town Beach and end with a party at Munro Preserve, hosted by the Mattapoisett Land Trust and Friends of the Mattapoisett Rail Trail. You must register in advance and pay a minimum fee (or raise money) to support regional hiking and biking paths.

Have you ever sampled your way through one of these ice cream trails? Share your favorite ice cream shop in the comments.

4 Thoughts on “Happy (Ice Cream) Trails to You”