25 Upstate N.Y. Day Trips That Will Make Your Weekend

Forget the chaos of the city. Head upstate to experience a different, quieter side of New York. 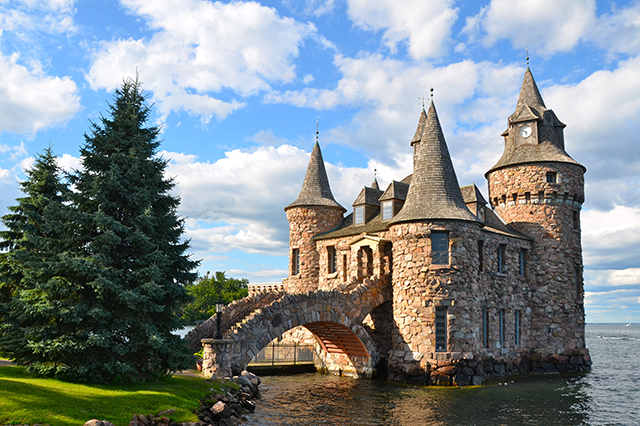 New York City is a star and you should try to see as much of it as you can, but don’t count out all of the fun day trips in upstate N.Y. Our selection of fun upstate N.Y. day trips features a variety of unique spots, including water parks, historic sites, museums, forts, beaches, an insane asylum and, yes, Niagara Falls.

Located in Schoharie County, this popular tourist attraction is one of the top spots in the state for caving and spelunking, especially since that the site does not require the equipment or training typically associated with the activity. The cave, which geologists believe formed several million years ago, is composed primarily of limestone from different periods of the Earth’s early history. While you’re there, be sure to also stop by the Cave House Museum of Mining and Geology.

Visitors to this spot in Herkimer will want to bring safety eye war, gloves and closed toe shoes for exploring the mines, where they might find Herkimer diamonds; which are double-terminated quartz crystals and, in some cases, millions of years old. The site also has campgrounds, a museum and a gift shop. It’s open from mid-April to late October.

Featuring the largest marble cave entrance in the nation, this Pottersville site includes formations that are over a billion years old. The park has more than 14 miles of snowshoe trails during the winter, a rock climbing wall, gemstone mining in the summer, a picnic area, museum and an ice cream stand with a devoted local following.

A top spot for aficionados of early Colonial history, Johnstown was founded in 1762 by William Johnson. During the Revolutionary War, approximately 1,400 soldiers fought at the Battle of Johnstown, which was one of the last of the war’s skirmishes. Famed residents of the town included Elizabeth Cady Stanton and Silas Talbot. The town’s Johnson Hall has been designated a National Historic Landmark and hosts regularly scheduled events.

Originally known as the Genesee County Poor Farm, which was established in 1826, this site was formerly a stage coach tavern before the county’s board of supervisors bought the property; which then maintained orphans, widowed women and their children, minor criminals and the mentally ill. Residents were known as inmates. Tours and group rates are available.

Situated on Hart Island in the Thousand Islands of the Saint Lawrence River, this well-visited landmark was considered one of the nation’s largest private homes at the time of its construction in the early 1900s. Many of the property’s rooms are left unfurnished and visitors to the island can also visit the Power House, which houses a museum, and Alster Tower. The house’s basement includes a pool, bowling lanes and a long passage to the Power House.

Fort Ticonderoga is an 18th century fort built by the French near the south end of Lake Champlain in the 1750s that played a pivotal role in the Revolutionary War; while Youngstown’s Old Fort Niagara was constructed in 1678 as a means to protect the interests of New France in North America and now serves as a park and museum. Historic Fort Ontario, which is listed on the National Register of Historic Places, housed soldiers during the Revolutionary War and more than 900 Jewish refugees during World War II.

Dedicated to the art, history and science of glass, this museum was founded in 1951 by Corning Glass Works and currently has a collection of more than 45,000 glass objects, several of which are more than 3,500 years old. The site’s galleries include pieces by artists, such as Klaus Moje and Josiah McElheny, as well as examples of Asian, European and American glassmaking. Subject matter includes glass in nature, origins of glassmaking, glass of the Romans and glass in the Islamic world.

Museum of Science and Technology

Also known as the Milton J. Rubenstein Museum (or MOST), this Syracuse site in Armory Square features multiple exhibits, a gift shop and a domed IMAX movie theater. Some of the permanent displays include Earth Science Discovery Cave, Life Sciences, Science Playhouse, Technotown and the Lockheed Martin Flight and Space exhibit.

Honoring boxers, trainers and other contributors to the sport, this Canastota museum is one of two recognized international boxing halls of fame. Ceremonies are held every year to honor new inductees, which are handled by the Boxing Writers Association of America. Categories at the museum include retired boxers whose last bout was no earlier than 1943, boxers who fought between 1893 and 1942, pioneers whose last bout was before 1892, observers (such as journalists and historians) and non-participants.

Debuting in 1939, this Cooperstown museum is the nation’s largest shrine to the sport. The site provides a history of baseball in the United States and includes 38,000 artifacts as well as exhibits honoring those who have played or managed the sport. A total 310 people have been inducted into the hall of fame, which draws approximately 300,000 visitors per year. The museum also has 2.6 million library items, such as newspaper clippings, and 130,000 baseball cards.

FIND & BOOK A HOTEL IN COOPERSTOWN

Acting as a shrine to America’s most popular gelatin dessert, this gallery is dedicated to exhibits about Jell-O and is operated by the Le Roy Historical Society. Visitors can learn about the history of the dessert, which was invented in Le Roy in 1897, as well as find some yummy recipes and a variety of items in the site’s gift shop.

The National Museum of Play

Rochester’s National Museum of Play was based initially on the collection of Margaret Woodbury Strong and made its debut in 1982. It has since expanded its collection to hundreds of thousands of items. The site is the only collections-based museum anywhere devoted solely to the study of play. It includes numerous interactive characteristics of a children’s museum, making it the second largest of its type in the U.S. Exhibits interpret the elements. The museum includes displays on Sesame Street, the Berenstain Bears and Dancing Wings Butterfly Garden.

One of the nation’s top tourist spots, these iconic falls should be viewed from the famed Maid of the Mist boat ride. But the falls are not the only sight in town. While you’re there, drop by Whirlpool State Park, the region’s fashion outlets, Three Sisters Island, Seneca Niagara Casino, Aquarium of Niagara and Niagara Gorge Trail.  If you have time and a passport visit the Canadian side of the falls, where the annual Shaw Festival presents theater for six months.

This scenic spot is home to a burgeoning wine region, famous lakes and hundreds of cultural and outdoor attractions. Visit Watkins Glen State Park to spy its glorious waterfalls – 19 in all! – and hike its craggy gorges. Or sip your way through the vineyards of the Seneca Lake Wine Trail. Afterward, take in fine art at the Corning Museum of Glass and old-time Americana at the Rockwell Museum. Check out more ideas of things to do in the Finger Lakes area.

This park on the shores of Chautauqua Lake is home to the 15th-oldest amusement park operating in the U.S. and the fifth oldest remaining trolley park. Current rides and attractions at the site include bumper boats, a carousel, climbing wall, go-karts, rollercoaster, mini golf, kiddie boats, a train and tugboat paddlers. There are also tennis courts, a bathhouse and dance hall.

Often referred to as the Grand Canyon of the Adirondacks, this sandstone gorge runs through Keeseville, empties into Lake Champlain and is fed by the Rainbow Falls at its southern tip. Activities at the site include adventure trails, biking, rafting, tours, rock climbing, rappelling, tubing and disc golf. Its biking trail is more than 15 miles long and the site offers both day and night tours.

This archipelago, which straddles the U.S.-Canada border, includes 1,864 islands that range in size from 40 square miles to smaller islands with a single resident. The islands are known for being havens for nature lovers as they contain numerous government regulated parks along the waterfront. They are also popular spots for fishing, boating and vacationing.

‘Tis always the season at this amusement park, located in the state’s North Pole hamlet, which has been operating since 1949, making it one of the nation’s first theme parks. The site, which operates from June to December, includes rides and attractions, such as the Peppermint Swing and Ferris wheel, as well as shows and a Christmas village, complete with a candy shop, post office, bakery, reindeer barn and Santa’s house.

Nicknamed the “Queen of the American Lakes”, this spot in Adirondack State Park has stunning views and a number of well-known bays; such as Silver Bay and Kattskill Bay. The locale is distinguished by “The Narrows,” a five-mile, island-filled section that is bordered by Tongue and Black mountains. Lake George is a popular tourist destination, has a summer colony and is known for being a top spot for hot air ballooning.

The Oneida County beach has a wide variety of restaurants and shops, as well as an amusement park with more than 20 rides. Sylvan also has camping areas, a marina and the Sylvan Beach Union Chapel, which has been listed on the National Register of Historic Places.

Located on the eastern most section of Lake Erie, Woodlawn Beach not only has a beach, but also a 93-acre park. Its nature center and bathhouse complex features a variety of exhibits that highlight the park’s history. It also has nature trails and a playground.

The Fulton-based park offers water slides, zip lines, go-karts and a number of attractions for toddlers. Some of its most popular attractions include the tunnel twister slides, kiddie mini river, tube slides and Thunder Rush Extreme Body Slide. Find an indoor water park near you.

This Canandaigua-based theme park owned by Bristol Mountain features nine attractions, including a raft ride, wave pool, Splash Factory and several huge slides, such as The Screamer, The Tornado, The Cliff and The Twister.

Situated in Ellicottville’s Holiday Valley resort, this outdoor adventure course features an aerial park, climbing forest and mountain coaster. From the late summer through early fall, it also offers chairlift rides. Sky High has 13 courses with varying degrees of difficulty. Children must be 7 years old to take part in the park’s rides.

Have you gone on any of these upstate N.Y. day trips? If so, tell us about your experience in the comment section.

For great deals on travel, including rental cars, visit AAA.com/Travel.

4 Thoughts on “25 Upstate N.Y. Day Trips That Will Make Your Weekend”