The Warwick, R.I., site is a cornerstone of an area revitalization plan. 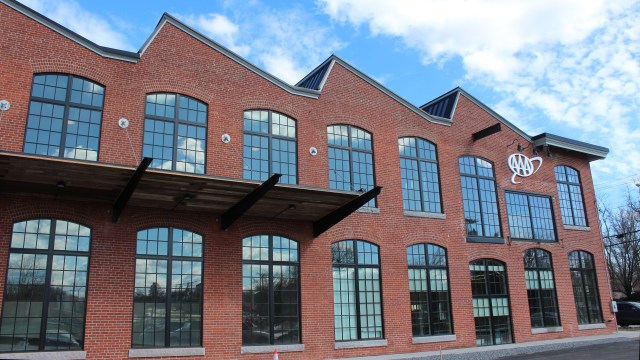 The restoration of a historical mill building in Warwick, R.I., by AAA Northeast has been heralded as a cornerstone of the city’s revitalization plan.

Known as the sawtooth building for its jagged roof, the 38,856-square-foot structure was part of a massive textile manufacturing complex over a century ago. It was the only building still fully standing after a series of fires in the 1960s. Over time, it had various other uses, but for many years sat vacant and deteriorating before AAA purchased it at auction in 2017.

The thought at the time was to create a AAA hub for branch, Fleet and Driving School activities. The branch moved in and opened last month. However, the remainder of the space is under lease by the city to house government offices. Construction on the city’s portion continues and is expected to be completed by late summer.

The city also has plans to build an outdoor ice-skating rink and events center in the area.

“With this, I firmly believe that businesses will start opening in and around the village, and Apponaug will be the central gathering place for Warwick,” the mayor said.

Visibility in the center of the city is one of the biggest benefits of the facility, according to Rick Del Nero, vice president of branch operations at AAA. And, sharing the space with government offices gives people a one-stop location to conduct business with the city and take advantage of AAA services, like Division of Motor Vehicle transactions.

Plus, there is pride in ownership. “We’ve heard so many members state how happy they are that we saved the building from demolition,” Del Nero said.

Member Dino Soscia was impressed when he stopped in about insurance recently. As a Warwick resident, he had passed by the deteriorating building many times wondering what would become of it. “I never thought it would become a AAA,” he said. “It’s easily accessible from the highway. It’s less congested than the old location, and the space is open and friendly.”

Member Christian Phillips, of Cranston, R.I., agreed. He was at the new branch working with Travel Advisor Robert Conners on a trip to Disney. “It’s roomier, and I like the high ceilings a lot,” he said.

The building’s jagged roof was originally built to capture sunlight through the windows on the straight edges. AAA has installed solar panels on the sloping edges to capture the sun’s rays and power the building.

“With solar power and other cost-saving measures, we’ve brought this 1900s mill building into the 22nd century with a new lease on life,” Del Nero said.