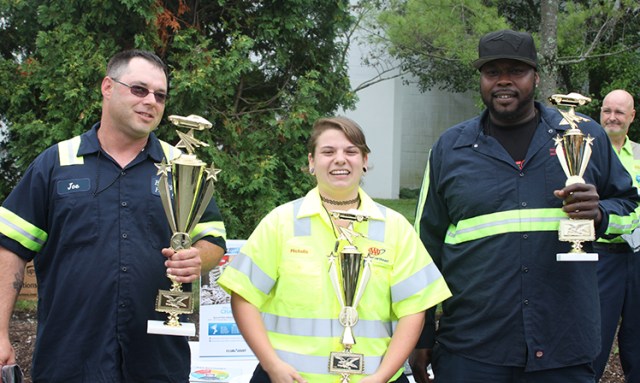 AAA Northeast spirit shined bright in July as the region’s top 10 battery technicians competed against each other at a Battery Service Skills Challenge in Providence, R.I.

The three finalists, Joe Charbonneau, John Tart and Michelle Glifort, went on to match their battery mastery against AAA technicians from across the nation for a grand prize at the National Championship in Washington, D.C. in October.

The three technicians represented AAA Northeast after beating out over 600 regional competitors. After placing first at the preliminary event, Charbonneau went on to place fourth at the National Championship.

Greg LeFort, battery program manager at AAA Northeast, traveled to all of the regional events in Connecticut, Massachusetts, New Jersey, New York and Rhode Island and was impressed by what he saw.

“I thought all three techs had a great chance to place in the top three in Washington,” said LeFort.

Each contest was judged based on the battery replacement, testing time and how well the technician interacts with and explains the battery program to the member. This year, AAA Northeast introduced a new tester, B2Q, which dramatically improved the test time and accuracy of the diagnosis.

LeFort had added confidence in Michelle Gilfort, who participated in the national championship last year. While she didn’t place in the top three nationally, Gilfort said she was grateful for the opportunity and is happy to have a job she enjoys so much.

“Last year was a lot of fun,” she said. “It was definitely nerve-wracking, but the energy was great. There’s nothing better than getting together and realizing we’re all here for the same reason. We like what we do, which is helping people.”

Gilfort has been a Roadside Technician in the Bridgeport, Conn., fleet for three years, covering areas from North Haven to Roxbury. Like Gilfort, Charbonneau knew the competition was a chance to prove his skills on the national stage.

“I’ve never accomplished anything like this in my entire life,” he said. “There’s parts of me that could cry right now because I’ve never had an opportunity to prove to myself that I can do this.”

The three technicians received additional training on a weekly basis prior to the two-day event in October.

“When you get to the national event, most people are going to ace the score sheet, and it’s going to come down to the battery replacement,” LeFort said. “I just wanted them to enjoy themselves and do the best they can. Just getting there is a phenomenal accomplishment.”