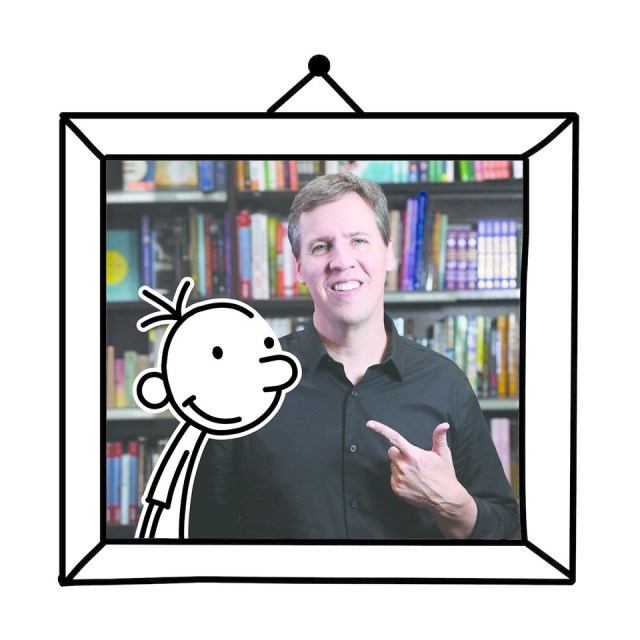 The AAA School Safety Patrol celebrates its 100th birthday this year as the largest, longest-running and most influential traffic safety program in the world.

The program enlists children to help fellow students navigate nearby roads. Not only do participants – instantly recognizable by their yellow sash – learn about traffic safety, they also develop leadership skills. The program was a starting point for many of the nation’s leaders, including Presidents Jimmy Carter and Bill Clinton and Vice President Joe Biden, as well as several Supreme Court justices, U.S. senators, governors and astronauts.

It was also a starting point for artists and writers like Jeff Kinney, author of the “Diary of a Wimpy Kid” book series. The Plainville, Mass., resident served two years on his School Safety Patrol and it’s safe to say the experience made an impression: The program was a major plot point in the first “Wimpy Kid” book.

We recently sat down with Kinney to get his take on the benefits of the program, the lessons he learned – and why you should never start a snowball fight in front of kindergartners.

What made you want to join the AAA School Safety Patrol? What compelled you to sign up?

Greg Heffly, the character in my book, is an exaggerated form of me and the appeal of the safety patrol is the same with him as it was with me – wearing the sash! It gave you the air of authority and in my neighborhood, no matter how far away you were from the school, by wearing that badge and sash you were a step above your peers.

I lived quite far from school, more than a mile away, and I remember there was a shortcut right near my home that would take you through somebody else’s backyard. And every so often I’d get busted or chased by the safety patrol all of that distance from the school. That really shows the long arm of the law! And so when I had my chance to break into the ranks, I took it.

How would you grade yourself as a safety patroller?

Well, I was not the best safety patroller, I certainly never raised up the ranks, and I was sometimes late for the Pledge of Allegiance and I may have thrown a snowball or two on duty. But it was fun. As a kid it was my first chance at feeling a sense of accomplishment, of being able to set myself apart from my peers.

And it almost felt like you were on a career track, in a way, and I did become a criminal justice major. So it’s like any school: You have kids who do the extracurricular activities and kids who don’t. The safety patrol kids tended to be the kids who turned into the leaders of tomorrow. I have nothing but good memories of it.

There’s a passage in my book about something that I did that was pretty shameful to me now. I wasn’t kicked off the safety patrol but what happened was, my friend and I were horsing around outside before school was over and we got into a snowball fight. And we did so right in front of a giant door/window combination at our school. When we looked up, all of the kindergartners had their faces pressed against the glass observing this absolute miscarriage of justice or misuse of power.

My friend and I knew we were going to be in trouble the next day, so I skipped school and my friend took the fall. So that made it into the first “Wimpy Kid” book in a bit of a different form. But maybe my days were numbered at that point. I may be the most dishonorable patroller in the 100-year history.

What’s your favorite memory of your time on the safety patrol?

This isn’t hilarious or anything but one time my friend and I were walking to school and of course the worst possible thing you can do on the safety patrol is forget your badge and your nylon strap. One day we were walking to school and I said to my friend “Oh, you forgot your safety patrol stuff.” And my friend just froze completely like it was unbelievable to think that he forget it. But then he said “You forgot yours, too.” I didn’t believe him but I looked in my bag and he was right. I just remember this feeling of utter shame walking to school, a man with no authority.

What were the major tasks you had to perform on the patrol?

There were two major functions: one was helping kids cross the street at the end of the day and the other was walking the half-day kindergartners home in the middle of the day. That created a feeling of freedom and responsibility.

What lessons in leadership, citizenship or responsibility did it teach? What did you learn?

I learned that I should take my responsibilities more seriously! I still have a lot of shame about that snowball-throwing incident. But I also think it taught me that there are a group of kids who step up as leaders and a lot of those kids were on the safety patrol. So, I had a lot of role models. The kids in the class above me who were in the program were definitely role models to me.

Would you recommend the experience to kids today?

I would recommend it, definitely, because it gives kids responsibility at a young age. Just as long as they don’t let it go to their heads.

Were you a school safety patroller? We want to hear from you! Email schoolsafetypatrol@aaanortheast for a chance to be featured in an upcoming story.