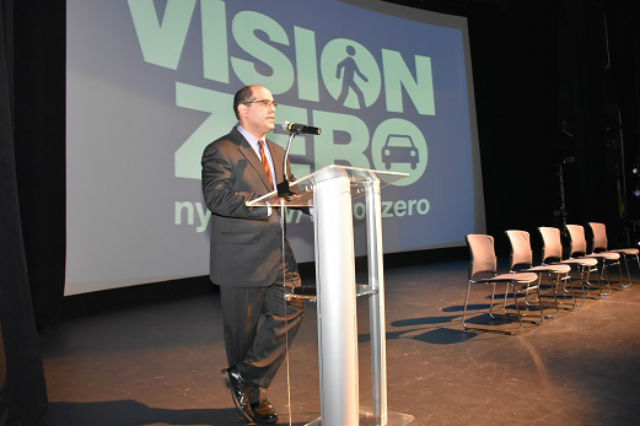 Not only is it the country’s largest fleet, it operates in one of the most difficult places in America to drive: the crowded streets of New York City. Therefore, it is critical for the fleet to also be the safest and most sustainable in the world. Under Mayor Bill de Blasio’s Vision Zero initiative, it is becoming just that. Across America, traffic fatalities have been going up. In New York City, they are going down.

On November 28, NYC Fleet will hold its annual safety forum to exchange best practices, promote vehicle safety technology, and to educate fleet managers about Vision Zero by bringing together people in various fields, including Michael McDermott, Safety Specialist for AAA Northeast, who will be speaking at the forum. “From the AAA perspective, I’m going to be mainly discussing how we secure our scenes after a collision,” McDermott said. “I’ll also stress the importance of uniform visibility and measures to prevent collision avoidance.”

Prior to the event, we caught up with Keith Kerman, Deputy Commissioner at the Department of Citywide Administrative Services and New York City’s first Chief Fleet Officer, to get a better insight into the work and efforts of the NYC Fleet.

What is the Vision Zero initiative?

Vision Zero in New York City is a comprehensive road map to drastically reduce traffic-related deaths on New York City streets. This includes an inter-agency task force that enacts and develops strategies to make New York City streets safer, ranging from lowering the citywide speed limit and increasing enforcement against speeding and failure to yield to pedestrians, to vehicle design and training of professional drivers.

The unprecedented effort comprises new legislation, changes to city policies, public education, and community outreach. The Vision Zero plan includes more than 125 initiatives spread across various City agencies that all have one goal in mind: making our streets safer for pedestrians and cyclists. Vision Zero originated in Europe, was brought to the states by NYC Mayor Bill de Blasio, and is now spreading through the US.

What is NYC Fleet doing to reach the goals of Vision Zero?

In May 2017, NYC Fleet published the Safe Fleet Transition Plan in conjunction with the US DOT Volpe Center. The plan stipulates that all vehicles purchased for fiscal year 2018 and beyond must include the best available safety technology including, where applicable, automatic emergency braking, rear and side truck guards, and backup cameras.

There are also more 2,000 truck side guards installed on NYC Fleet vehicles, making it the largest program of its kind in the nation. Side guards have been shown to reduce the deadliness of truck collisions with pedestrians by 20 percent and with bicyclists by 60 percent. At the Vision Zero Fleet Safety Forum, we will be releasing the first update to this plan calling for future advancement in vehicle safety.

The city also provides all authorized drivers of city vehicles the NY State Defensive Driving program, free of charge. The course focuses on best practices for safe vehicle operation. Since Vision Zero began, almost 50,000 drivers have gone through the program.

Are there any technological advances NYC Fleet is investing in?

In addition, thanks to funding from U.S. Department of Transportation, New York City’s fleet is evaluating the safety functionality and effectiveness of the installation of vehicle-to-vehicle (V2V) and vehicle-to-infrastructure (V2I). This technology has the potential to alert drivers, through direct short-range communication, to take specific actions to avoid a collision or reduce collision severity if one occurs. Some of the applications of this technology being evaluated are traffic signal change warnings, blind spot and pedestrian alerts, road hazards, and pedestrian-oriented phone apps. If the technology is worthwhile, you will see it on New York City streets.

What have been the results of Vision Zero since it was adopted?

Since the program’s inaugural year in 2014, when New York City became the first American city to adopt Vision Zero, the city’s traffic fatalities have declined 28 percent with a 45 percent decline in pedestrian fatalities — bucking national fatality trends, which have increased 15 percent over the same period. The City’s fleet has also seen a reduction from fiscal year 2014 to fiscal year 2018 in fatalities and collisions per mile.

What is the goal of the Vision Zero Forum?

The Vision Zero Fleet Safety Forum is held every year to bring together road safety advocates, leaders from private and public fleets, car manufacturers, and vendors to discuss the causes of road collisions and how to reduce the severity of such.

Past forums have included national advocates for truck side guards, fleet safety system providers, and speakers from organizations such as Families for Safe Streets and Transportation Alternatives, the Swedish Transport Administration, and NYC Vision Zero Task Force Agencies.