Hess holiday trucks have been around for more than half a century. Over that time, they've become one of the most iconic toys ever made.

41 COMMENTS
Auto History » The History of the Holiday Hess Trucks

Mariah Carey’s “All I Want for Christmas Is You” emanates from every speaker in the Western world, mall parking lots turn into scenes of winter chaos, greeting cards flood mailboxes and everything becomes gingerbread- or peppermint-flavored.

These are all telltale signs the holidays are near.

But there’s one other sound, or should we say jingle, that comes around once a year, signaling the start of the holiday shopping season: “The Hess truck’s back and it’s better than ever!”

The Hess Corporation has released a new toy truck just in time for the holidays every year since 1964. What started as a simple gesture of gratitude toward customers has grown into one of the most iconic and collectible toys to ever hit the market.

But how did the Hess truck come about in the first place? For that answer, we’ll have to travel back nearly a century.

The Origins of the Hess Truck

In 1933, recent high school graduate Leon Hess purchased a used oil delivery truck and began his own business delivering fuel to homes in Asbury Park, N.J. By 1964, he had a burgeoning empire of gas stations to his name. That winter, Hess wanted to offer his customers a gift as a sign of goodwill. He starting selling toy trucks at Hess gas stations that would be both affordable and suitable for kids of all ages.

The original 1964 Hess truck, a replica of the company’s first B61 tanker, was well ahead of its time compared to other toys of the day. Hess was adamant the toy be made with the highest craftsmanship. The truck featured an empty cargo tank that could be filled using an accompanying funnel and rubber hose, as well as working headlights and taillights. The toy even came with batteries to make it more affordable for parents.

For the next 15 years, the Hess truck was sold each holiday season without the aid of major marketing efforts. That all changed in 1980 when the company released its first television commercial. A few years later, in 1988, it came up with a jingle to accompany the ads. The now iconic “The Hess truck’s back and it’s better than ever” tune, which has been used ever since, is an adapted version of the hit 1963 song, “My Boyfriend’s Back” by the Angels.

In 2014, the Hess company sold its 1,200-plus retail gas stations to Speedway. Many thought this would mean the end of the line for the trucks. Hess, however, quickly eased those concerns by announcing the tradition would continue with its 50th anniversary truck. Since then, the toy has only been available online. The transition hasn’t hurt business, as the truck is one of the bestselling toys on the internet, according to Hess.

Hess Trucks Through the Years

For nearly a quarter-century, every Hess toy truck was modeled after an actual vehicle in the Hess fleet. This included different versions of fuel tankers and replicas of Leon Hess’ original oil delivery truck. There were also some outside-the-box toys sold during this time. In 1966, the company released the Hess Voyager, a replica of a real Hess oil tanker ship. Four years later came the first Hess fire truck, designed after the one used at the company’s Port Reading, N.J., oil refinery. Maybe the most surprising addition to the Hess toy lineup came in 1981 with the arrival of the Hess training van. This toy was modeled after the GMC Royal Motorhome Hess used to conduct field training lessons.

These early releases differed from today’s toys in another way as well: they were not always one and done. Nowadays, Hess releases a brand-new model of its iconic toy each year, but that wasn’t always the case. The company sold the same tanker-trailer in 1964 and ’65. It doubled up again later that decade by selling a slightly modified tanker truck from 1968-69 and again in 1972 and 1974. Hess sold its first fire truck in consecutive years to kick off the 1970s, as well as a modified one in 1986. The company also brought back the toy replica of Leon Hess’ original delivery truck in 1982 and 1983. 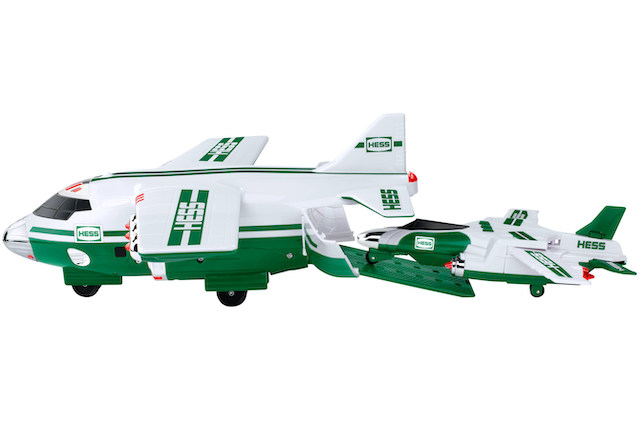 It wasn’t until 1988 that Hess released a toy not based on one of its vehicles. That year, the company debuted a combination trailer truck and GT-style race car. These vehicles were also the first to come with license plates inscribed with the year of issue, while the friction-powered race car was the first Hess toy with a motor.

Since the late 1980s, the Hess toy lineup has grown to include just about every type of vehicle imaginable. In 1993, it was a police car. Two years later, a helicopter. Closing out the decade was an RV with dune buggy and motorcycle in 1998 and a space shuttle in 1999. This century, Hess has created everything from tow and dump trucks to jet fighters and monster trucks. In October, Hess announced the 2021 toy would be a cargo plane and jet. Proving just how far the toy has come, this year’s offering comes with a free STEM curriculum guide.

The Hess toy truck has been released every year since 1964 with three notable exceptions. Ironically, gasoline was a main culprit in each instance. In 1973, the U.S. found itself mired in an oil embargo. The astronomical gas prices made manufacturing toys extremely expensive, prohibiting Hess from releasing a new truck that year.

Later that decade, the country was again hit with a fuel shortage, this time in the form of the 1979 oil crisis. This prevented Hess from making a toy for the second time.

The last year a new Hess truck was not unveiled was 1981, when the country entered a recession. It was a time marked by supply shortages and inflated prices, not ideal circumstances for manufacturing.

During those years, gas consumption was discouraged. This meant fewer customers visiting Hess gas stations, the only places where the toy trucks were sold. It simply wouldn’t have been a good business decision to release new toys knowing fewer people would come across it.

How Hess Trucks Are Made

Children’s toys may look simple, but – at least when it comes to the Hess trucks – the process of creating and building them is anything but.

Hess doesn’t give too many clues into what it refers to as the “secretive process” of developing its annual toy. But we do know it usually takes two to three years to get the collectibles from the drawing board to the shelves. However, it’s been known to take up to six years in some cases.

The process begins with a collection of images to narrow down a possible theme. Then some initial sketches are drawn up. The top two or three of these designs are chosen and developed into 3D rotating images. Finally, handcrafted models are built and final design decisions are made.

Hess trucks have always been well ahead of their time when it comes to quality and craftsmanship. Early models comprised about 75 different pieces. Today’s models have anywhere between 200 to 300 pieces, each one precisely cut. Once the pieces are made, the toy is meticulously assembled and undergoes numerous quality tests before being packed in its box and shipped to your doorstep.

Do you collect holiday Hess trucks? Tell us in the comments.

For more stories like this, visit our auto history page.

41 Thoughts on “The History of the Holiday Hess Trucks”