The electric vehicle movement isn’t just revolutionizing automobiles, it’s shaking up the business world, as well. For decades, mass car manufacturing has been designated almost exclusively to the major companies. The changing mobility landscape, however, has given upstart companies an opportunity to enter the picture. Several up-and-coming EV manufacturers have done just that and made quite the name for themselves in the process.

But there’s more to the EV industry than just the cars themselves. The country is in desperate demand for substantial charging infrastructure improvements. Private companies have spotted this need in the market and are continuing to build out their own network of publicly available charging locations.

Here are some of the new EV brands you’ll be hearing more of in the future.

Even casual EV connoisseurs have likely heard the name Rivian by now. The startup was founded in 2009 and has since picked up a number of big-name investors, including Amazon and Ford.

Rivian made history in 2021 by producing the first commercially available electric pickup truck, beating industry stalwarts such as Tesla and GM. All-in-all, the R1T truck has been well received by critics. According to Rivian, it boasts a driving range of 260-400 miles, 11,000-pound towing capacity and a 0-60 time of as little as 3 seconds. In addition to the pickup truck, the Southern California-based company is producing an electric SUV that should be available later this year, and manufacturing fully electric delivery vans for Amazon.

Like Rivian, Lucid made headlines last fall. This time, it wasn’t for production but for performance. In September, the California-based startup announced its debut sedan, the Lucid Air, achieved an EPA-certified range of up to 520 miles. That number is by far the highest of any EV on the market, besting runner-up Tesla Model S by more than 100 miles. (Lucid and Tesla are inextricably linked, as the former is being run by many past executives of the latter.)

Lucid currently offers three trim levels of the Air: the Grand Touring, Touring and Pure. All can travel at least 400 miles on a single charge, but you’ll have to pay a hefty price for that superior performance. The models come with starting price tags ranging from $87,400 to $154,000.

Auto designer Henrik Fisker, who styled cars for BMW and Aston Martin, founded his eponymous EV company in 2016. Not long after, the car manufacturer announced it was developing a fully electric, $40,000 luxury SUV. The finish line of that pursuit is finally within sight, with the Fisker Ocean expected to arrive later this year. Touted as the most sustainable SUV on Earth, the vehicle’s most notable feature is a solar roof that, according to Fisker, can produce up to 1,500 miles worth of energy per year.

The upstart EV maker, which has already announced plans for a second, smaller SUV dubbed the Pear, has received more than 40,000 reservations for the Ocean. The base trim has a starting price point below $38,000.

NIO is a China-based EV manufacturer founded in 2014. It is already one of the leaders in electric car sales in its home country, along with companies like XPeng and Li Auto, and has big plans for expanding into other regions around the world. Late last year, NIO announced intentions of selling its vehicles in 25 new countries and regions, including the United States, by 2025.

NIO offers a full lineup of EVs, including both sedans and SUVs, with more models expected in the future. The ET7 and ES8 are its flagship sedan and SUV, respectively.

VinFast, established in 2017, is the first Vietnamese carmaker to sell its vehicles globally. The EV manufacturer has eyes on entering the American market later this year. It will do so with two models, a mid-size and full-size SUV, dubbed the VF8 and VF9, respectively.

What’s most notable with VinFast isn’t its vehicles, however, it’s how the company is selling them: Drivers buy the car but lease the battery. The monthly payments are commensurate to the mileage plan chosen. Furthermore, VinFast offers consumers the option of a home charger or access to nationwide public charging.

It only makes sense that the largest tech company in the world would try its hand at manufacturing the increasingly popular, boundary-pushing technology that is an EV. To be clear, there are currently no known plans of an Apple-branded car coming to fruition anytime soon. But the tech giant’s intention of developing such a vehicle goes back nearly a decade, and just last year rumors circulated that Apple was partnering with Hyundai to produce an EV. While that deal ultimately fell through, don’t be surprised to hear about an Apple car in the very near future.

EVgo is the nation’s largest public fast charging network, one that includes over 850 locations across more than 30 states and 60 metropolitan areas. The company claims 130 million Americans live within 10 miles of an EVgo fast charger. Furthermore, it has announced plans to triple its network’s size within the next five years.

Fast chargers can recharge an EV battery in minutes rather than hours. EVgo further distinguishes itself by powering all its locations through renewable energy. To use a charger, drivers can pay as they go or sign up for a membership. EVgo recently partnered with General Motors in a deal that will allow GM customers to receive discounts on charging and exclusive reservations at EVgo locations.

While EVgo has the largest number of fast-charging stations, its footprint pales in comparison to that of ChargePoint in terms of total locations. The country’s leader in EV charging stations, ChargePoint has roughly 15,000 outposts across the U.S., accounting for some 50,000 charging ports. The vast majority of these, however, provide Level 2 charging, which takes longer to recharge an EV battery than fast charging.

ChargePoint chargers are sometimes free to use if they’re owned by a retail business, such as a shopping mall or hotel. Otherwise, EV owners can pay via smartphone or ChargePoint card.

Blink is another of the largest owners and operators of public EV charging locations. Since 2009, it has constructed more than 23,000 such locations. Utilizing Level 2 charging, Blink chargers are capable of adding up to 65 miles of range in an hour.

Blink also sells residential chargers to use at home. These Level 2 chargers connect to your home’s Wi-Fi and can be controlled through a smartphone and devices like the Amazon Echo and Google Home. 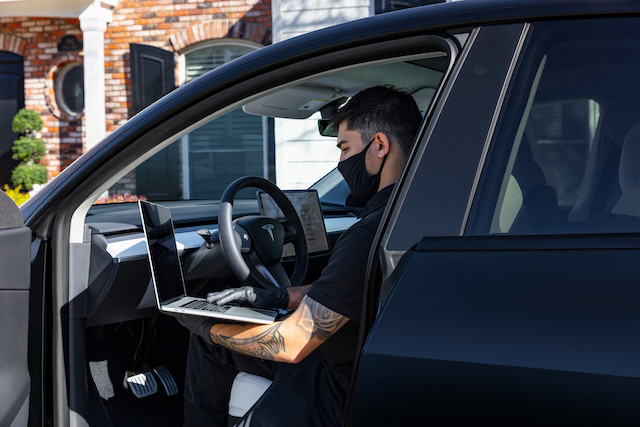