5 of the Largest Objects Ever Moved on the Road

Space shuttles and boulders and turbines, oh my! These are some of the largest objects moved on roadways. 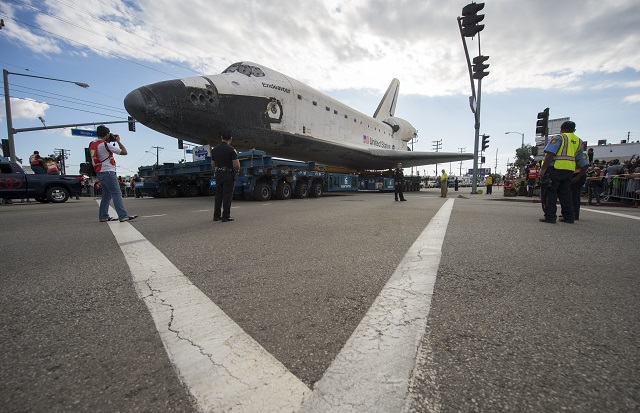 Moving a single piece of furniture often seems like an impossible feat. The planning, lifting and maneuvering can require a multi-person team. Now imagine that this piece of furniture is as long as a football field and weighs more than a house. And instead of moving it from one room to the next, you have to drive it across state lines. As you can guess, this process requires an immense amount of logistical planning and the help of some giant, powerful machines. But it has, in fact, been done.

Commercial Truck Trader recently compiled a list of some of the largest objects moved on the road. Check them out below.

“Levitated Mass” is a large-scale outdoor art installation at the Los Angeles County Museum of Art. It includes a 340-ton boulder bolted over a trench, allowing viewers to walk underneath it and get a 360-degree view. The granite megalith needed for the project was found in Riverside, Calif. It took roughly 11 days to complete the 105-mile journey, as workers moved only at night and followed a specially designated route through 22 cities. The museum states that, at 340 tons, the boulder was one of the largest megaliths moved since ancient times.

Green energy is quickly becoming the preferred energy source around the world. And though it does not require depleting any of the Earth’s resources, it can certainly necessitate some manpower. Case in point: moving giant wind turbine blades to their destination.

In 2017, a Chinese transportation company was tasked with moving a series of 80-ton, 172-feet long blades. Making it even more challenging was the fact that the blades had to be transported up the 1,312-foot Baoding Mountain.

The space shuttle Endeavour completed 25 missions into space, including the first service mission to the Hubble Space Telescope, as well as the first mission to add a U.S. component to the International Space Station. And though it didn’t involve an extraterrestrial effort, the Endeavour’s final trip was no easy feat.

After landing at Los Angeles International Airport, the Endeavour traveled 12 miles through the heart of urban Los Angeles to its new home at the California Science Center. At 78 feet wide, 57 feet high and 122 feet long, navigating the streets required the help of more than 100 people. Approximately 1.5 million people lined the streets to watch as the shuttle passed by.

In 2013, a 640-ton power station transformer was transported in Britain. The vehicle used to move the piece of equipment was 328 feet long and 16 feet wide, and took up two highway lanes. The transport could only travel at a speed of 4 mph, which caused a 13-mile traffic backup.

In 2014, Perkins Specialized Transportation was commissioned to carry four 400-ton generator parts. What made this even more difficult was that the length of the trip. The generators were moved from California to Utah – a journey of 850 miles. To get the job done, Perkins utilized a Mack Titan to pull a custom-built, 300-foot-long trailer, which had a whopping 192 wheels.

For transporting smaller loads (like your car), AAA Roadside Assistance is available whenever you’re in need of a tow or help at the roadside.