Everything You Need to Know About Car Infotainment Systems

Infotainment systems simplify a driver's experience by bringing all the car's functions front and center. But they can still can still cause dangerous distractions. 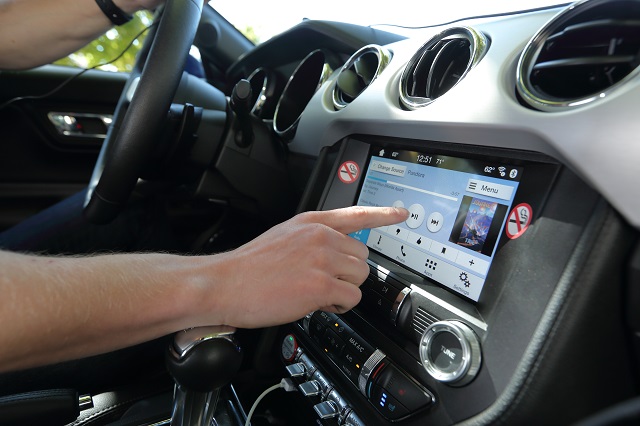 A car’s infotainment system is its main technological control center and interface. It operates all the car’s entertainment (music, radio, etc.) and information functions (navigation, heating and cooling, etc.) in one easy-to-use system. These tasks are done through the touch of a button, a touchscreen or voice command. Almost all new automobiles come equipped with some sort of infotainment system. More advanced systems, though, may only be available in luxury cars or higher-end trim levels.

Car companies put their own unique infotainment software into their models, but since most consumers’ lives run through their smartphones, almost all major manufacturers are making their systems compatible with Apple CarPlay and/or Android Auto.

CarPlay essentially takes your iPhone’s functions and puts them on your car’s built-in display. It is compatible with all with all iPhone models 5 and up. The interface will be instantly recognizable to iPhone users, although it is simplified in order to be used safely while operating a vehicle.

Once you plug your phone in (or connect it wirelessly if your car allows), your car’s built-in infotainment system and digital display will be replaced by CarPlay. You can listen to music, make and receive calls and text messages, and get directions in much the same way you would when using your iPhone. However, CarPlay is designed to be used in a safe manner, one that allows you to keep your focus on the road. For instance, text messages are read aloud to you instead of appearing on the display. Drivers can also activate Siri simply by pressing and holding down a button on the steering wheel. This allows drivers to operate CarPlay through voice control. CarPlay also works with a car’s dials, buttons and knobs as well as touchscreen technology.

CarPlay supports other apps including Spotify, Pandora, Audible and Amazon Music. Apps that would be dangerous to use while driving, such as games, are not available.

More than 500 car models work with CarPlay. If your vehicle is not compatible but you’d still like CarPlay without purchasing a new car, there is hope. You can buy an aftermarket stereo. Several manufacturers produce car stereos equipped with the technology that you can have installed in your vehicle.

Android Auto works much in the same as CarPlay except instead of using Apple’s iOS operating system, it works with Google’s Android system. It is compatible with all Android phones that run 5.0 or higher. Like CarPlay, dozens of automakers have equipped their car models with Android Auto. It is also compatible with many of the same apps.

One of the most significant differences between Auto and CarPlay is that Auto can be used simply as an app on your phone instead  of being connected to the car’s built-in system. This allows it to be used in car’s that are not compatible with Android Auto. However, not having the interface on the car’s dashboard makes controlling the system less convenient. To mitigate this, the app’s interface mimics what would appear on the car’s display. This includes the use of larger icons and text to make it easier to see and touch.

Even using voice command, which allows a driver’s eyes to remain on the road and hands on the wheel, can pose a threat. Research from the AAA Foundation for Traffic Safety found that potentially unsafe mental distractions can persist for as long as 27 seconds after drivers use voice-based technology.

Even though CarPlay and Android Auto required less demand and time to use, drivers still took up to 33 seconds to complete a navigation task. Drivers can travel the length of three football fields during this time while traveling at just 25 MPH. AAA warns that just because technologies are compatible or built into a vehicle does not mean they have been proven to be safe to use while driving. When driving, motorists should only use these systems during emergencies.

To learn more about the AAA Foundation for Traffic Safety and its latest studies, visit AAAFoundation.com.