Snakes on a plane? Yup. Chainsaws, too. The TSA's humorous Instagram account proves there's no limit to what passengers will try to sneak onto a flight. 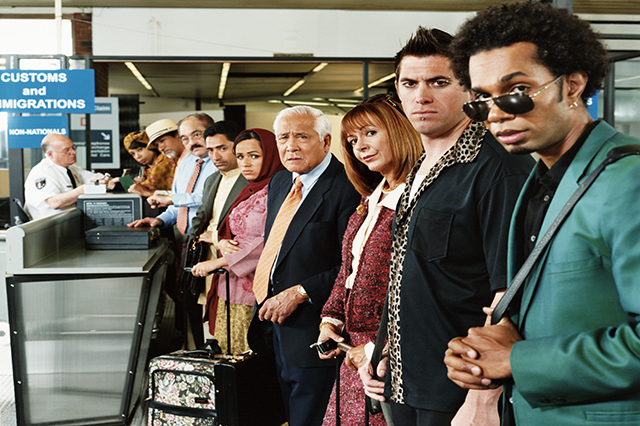 Since its founding in 2001, the Transportation Security Administration has become known for its agents finding bizarre items during the screening process. To better inform the public, the TSA created an Instagram account in 2013, which recently reached 1 million followers. The page features personal accounts of unusual experiences and hilarious pictures. Many of these wild stories and photos have surfaced on the internet in recent years.

For your enjoyment, we compiled a list of the 10 craziest TSA stories.

Those who plan to travel with an inflatable item can learn a lesson or two from this story. The TSA agents at the Dallas/Fort Worth International Airport had to screen the large pink object with a great deal of care. According to TSA, this particular flamingo was not traveling. It was on its way to work at a display in one of the concourses.

Snakes on a Plane

It doesn’t just happen in the movies. The TSA has HAD IT with people trying to smuggle exotic pets on planes. In 2011, a Brazil-bound man was apprehended at Miami International Airport with some unusual baggage. The passenger attempted to go through security with seven exotic snakes and three tortoises held in nylon bags that were concealed under his pants. Thanks to the latest technology, the TSA agents caught the man who was later arrested and charged with violating the Lacey Act, which deals with imports of exotic animals.

“While snakes and tortoises may not pose a threat to aviation, non-metallic weapons and explosives concealed beneath clothing remain a concern for security personnel and this discovery demonstrates again the effectiveness of advanced imaging technology,” said TSA spokesman Jon Allen.

Animals have a history of passing through airports in extremely strange ways. During a routine screening at the Los Angeles International Airport in 2011, a TSA agent discovered a woman had taped two birds wrapped in socks to her leg and chest. She was apparently attempting to take them to China. Instead, the woman was arrested by the U.S. Fish and Wildlife Service on suspicion of smuggling endangered animals out of the country. Thankfully, the birds made it out alive.

“It was just one of those weird things that happens at our checkpoints,” a TSA spokesperson said.

Bringing a bottle of alcohol through security is a bad idea – it will quickly be confiscated. Passengers routinely attempt this, but TSA agents at the Detroit Metropolitan Airport were surprised to find five endangered seahorses in an oversized brandy bottle back in 2012. They were spotted in a traveler’s carry-on bag. The passenger was later arrested and the seahorses (which, sadly, did not make it) were handed over to Michigan wildlife officials.

A great way to ruin a delicious batch of enchiladas is by hiding a large knife in it, especially while traveling through airport security. In 2014, a passenger flying out of Sonoma County Airport left TSA in disbelief after officials found an 8-inch long knife inside an enchilada in her carry-on bag. The woman, who was on her way to catch an Alaska Airlines flight, admitted she forgot about the knife.

She was cleared after officials learned she just wanted to eat her meal on the plane. “There’s no word on if the enchilada made the trip,” said a TSA spokesperson.

Most air travelers know that knives, guns and other weapons are strictly prohibited. A traveler in 2014 tried to test the rules by bringing a chainsaw through the checkpoint at the Albany International Airport. The chainsaw was ultimately surrendered from the passenger’s carry-on. TSA posted a photo online with a caption stating chainsaws must be packed as a checked item as long as there’s no trace of fuel or fumes.

Catch of the Day

TSA officials were in for quite a surprise when they stopped an unexpected passenger traveling through Logan International Airport in Boston. A 20-pound live lobster tucked inside a checked bag caught agents’ attention during the screening process. According to TSA’s online security screening guide, “A live lobster is allowed through security and must be transported in a clear, plastic, spill-proof container.”

Dying to Get on a Flight

TSA agents at the Hartsfield-Jackson Atlanta International Airport in Georgia had caused quite the scare when Nubbins, a movie prop corpse from “The Texas Chainsaw Massacre 2,” went through the line. Luckily for Nubbins, the realistic-looking corpse didn’t have to take off his shoes during screening. Hopefully no one was stuck sitting next to him on the flight.

Service animals have long been a topic of discussion among the flying public. After the TSA shared a photo of a mallard going through security at Charleston International Airport in South Carolina, the debate of allowing animals on board resurfaced online. According to the TSA, the duck was a passenger’s service animal, flying with its owner aboard a recent flight.

A giant pair of ceremonial ribbon-cutting scissors was found at the Nashville International Airport in Tennessee. Unfortunately for the passenger, the scissors were not allowed on the flight. According to TSA guidelines, “If packed in carry-on, they must be less than 4 inches from the pivot point. Any sharp objects in checked bags should be sheathed or securely wrapped to prevent injury to baggage handlers and inspectors.”

Have you ever seen anything unusual at the TSA checkpoint? Were you ever stopped for trying to bring something out of the ordinary onto a plane? Tell us your craziest TSA stories in the comments below.