Discover the Iconic Castles of Scotland

Did you know there are thousands of castles throughout Scotland? Here are just four stunning examples. 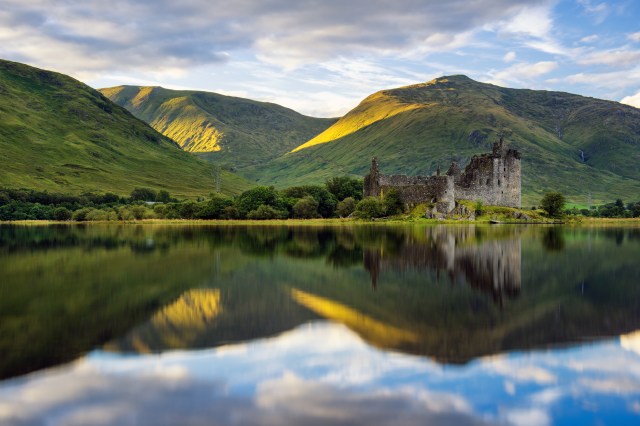 Scotland is known for its sweeping landscapes of heather-covered mountains, serene lochs dotted with verdant isles and rugged ocean coastlines. Spectacular castles punctuate this beautiful land, bearing the heritage of its turbulent history.

If you’re interested in exploring and learning about these fairytale structures, a guided tour vacation is one of your best bets. Talk to a AAA travel advisor to find out about your options.

In the meantime, let’s explore a few of Scotland’s most famous castles.

Now in a state of glorious ruin, Urquhurt Castle was once Scotland’s largest castle. Perched on cliffs overlooking Loch Ness, fortifications at Urquhurt date back to the Iron Age, but the present castle was erected in the late Middle Ages. For centuries it played a leading role in the Wars of Scottish Independence. Today the castle is treasured both for its past and for the beauty it lends to the landscape.

Dunvegan Castle on the Isle of Skye is Scotland’s oldest inhabited castle; this lakeside structure has been the ancestral home of the MacLeod family for 800 years. There are many treasured artifacts and antiques behind the battlements, but the most storied is the Fairy Flag, which legend says was provided to the Clan MacLeod by fairies. When this banner is unfurled, it guarantees victory for the clan in battle.

Glamis Castle is the setting for Shakespeare’s Macbeth, and that’s only the start of the captivating stories associated with this millennia-old castle. It was the childhood home of the late Queen Mother and has been home to the Lyon Family since the 14th century.

The imposing Edinburgh Castle, perched high above the city on volcanic rock, was the home of king and queens such as Queen Margaret, Mary Queen of Scots and James VII. Today, it houses Scotland’s crown jewels, including a crown first worn for a coronation in 1540 and a scepter presented to James IV by Pope Alexander VI in 1494.

To learn more about Scotland castle tours, please reach out to a AAA travel advisor.