Winning Road Trips: How to Go on 8 National Park Tours From Las Vegas

It’s a win-win situation when you tag on a visit to one of America’s national park tours from Las Vegas. See majestic canyons, wind-sculpted arches, tumbling waterfalls and soaring sequoias. 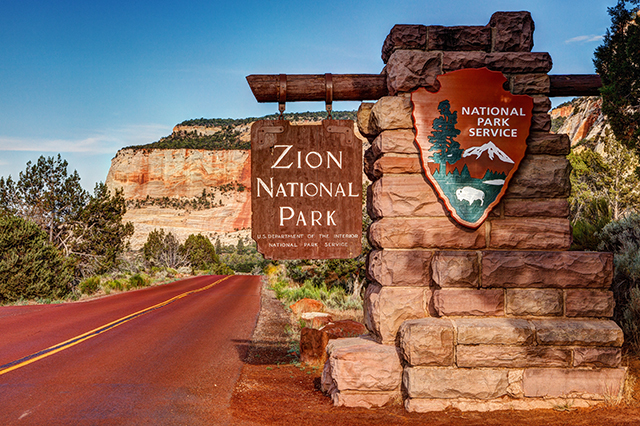 Going on some of America’s best-known national park tours from Las Vegas couldn’t be easier. Add on a visit to some of the great natural wonders of the Southwest to your Vegas vacation and you’ll trade high-decibel casinos and bright neon lights for dusky-hued canyons, towering red-rock formations and rushing rivers. More than a dozen parks in six states are within a day’s drive of the Strip, but there are eight that truly hit the never-to-be-forgotten jackpot. So get revved for national park tours from Las Vegas that will turn your vacation into an Instagram-worthy tour of some of America’s greatest natural wonders.

Visiting the Grand Canyon is a natural when on a Vegas vacation—after all, a scenic helicopter flight over it is a popular daytrip. America’s most famous natural landmark has been a national park since 1919. Located about five hours away in northern Arizona, it’s 270 miles long and 18 miles wide—carved by the Colorado River over the past 5-6 million years—and is visited by five million people a year via its South Rim (most accessible with the best viewing areas; open year-round) and North Rim (less visited; open mid-May to mid-October).

If you like the heat (and you must if you’re visiting Sin City in summer when temperatures often top 100 degrees), pair a Vegas vacation with a few days in the hottest, driest, lowest place in North America. Straddling the California/Nevada border and reachable in about three hours, Death Valley is 282 feet below sea level, receives less than 2.5 inches of rain annually and once topped out at 134 degrees Fahrenheit. It earned its name in 1849 when gold prospectors met unfortunate fates due to this desolate valley’s scorched extremes. And now people come here on vacation. Crazy, right?

Head in the opposite direction and you can also drive to this 232-square-mile park in southwestern Utah in about three hours—and it won’t disappoint. Zion is known for its towering sandstone cliffs, painted by nature in shades of orange and red, and formed over a period of 250 million years. It’s a popular spot for hiking and there’s a free shuttle bus that loops the Zion Canyon Scenic Drive, making stops so you can hop off to snap photos or explore.

Have you hoodooed? If you haven’t, continue on for another hour past Zion (pairing these two parks is a no-brainer) to see the red-hued spiral-shaped rock formations known as hoodoos. Bryce Canyon has the largest collection of them anywhere in the world! They were created by natural erosion and as you explore by car or free shuttle bus, you’ll spend hours gazing at them, deciding if they look like cathedrals or castles or even your favorite Disney or Star Wars characters.

Named for the spiky trees with haphazard branches and dagger-like leaves that thrive in the Mojave Desert of southeastern California, Joshua Tree National Park is an arid wonderland of scraggly silhouettes (the tallest tree tops out at 40 feet) set against a vast and unforgiving landscape. One of the easiest-to-reach national parks from Vegas (about three hours away), it totals 800,000 acres and encompasses three ecosystems; in addition to the Mojave, you can visit the Colorado Desert with its “jumping” cholla cactus and the Little San Bernardino Mountains, home to California junipers and pinyon pines.

Located in eastern Utah, about seven hours by car from Vegas and not far from the Colorado border, Arches National Park is famous for its more than 2,000 natural sandstone arches—the largest concentration in the world. Deep rusty red in color and formed in all shapes and sizes (the most famous are 305-foot Landscape Arch and oft-photographed Delicate Arch), they are easily viewed on an 18-mile scenic road that takes about four hours to explore.

Driving to California’s most-famous national park from Vegas takes eight hours from June to October and 10 hours from November to May, when snow closes the shorter route through the Sierra Nevada mountains), but if you’ve never experienced the serenity of Yosemite Valley’s granite landmarks, El Capitan and Half Dome, felt the tumbling mist of Bridal Veil Falls on your face or gazed up at majestic 2,000-year-old sequoia trees, then this trek is a small sacrifice.

Unlike most other national parks, the main attractions at 52,000-acre Mesa Verde, located in southwestern Colorado about eight hours’ drive from Vegas, are man-made: 600 Ancestral Pueblo cliff dwellings dating back to between 600 and 1300 AD. The largest and best-known is the Cliff Palace and it and three other dwellings are open for guided tours from May until September and October. Do you know what a kiva is? If not, visit Mesa Verde and find out.

Have you gone on any national park tours from Las Vegas? Tell us about them in the comments below!