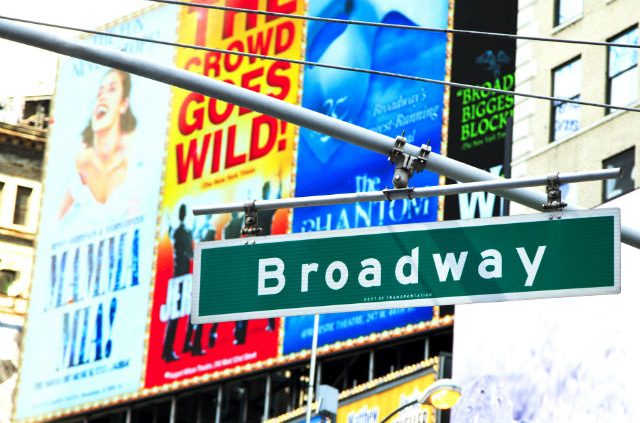 They say the neon lights are bright on Broadway – and a Broadway show is the perfect compliment to any trip to the Big Apple. The ins and outs of Broadway can be a little confusing for first-timers, but don’t worry! These New York City theater tips can help you find affordable tickets, discern the best seats in the house and figure out theater etiquette.

Where to get affordable tickets

Other than distance, the main barrier to entry on Broadway is cost. Sure, ticket scalping inflates the prices drastically – but even buying tickets straight from the theater itself can stress your wallet. Here’s some theater tips on how you can get more affordable tickets to Broadway shows.

TDF, or the Theatre Development Fund, operates a few “TKTS” booths throughout the city. At these booths you can purchase same-day discounted tickets for Broadway and off-Broadway shows. You can spot the TKTS booth in Times Square by the iconic red steps that serve as its roof.

You won’t be able to find mega-blockbusters like Hamilton or The Book of Mormon at a TKTS booth (since shows like these don’t have any extra tickets laying around). I’ve used TKTS for most of my theater-going life, and their generous discounts have enabled me to see many of my favorite Broadway shows. If you’re not in the mood for a musical, make sure to take advantage of the Times Square TKTS’s much shorter “express” line for plays.

You can also save on theater tickets with AAA Discounts.

Don’t want to wait on line? You don’t have to! You can snag tickets at deep discounts on TodayTix. This handy app lets you purchase tickets for Broadway and off-Broadway shows on your phone. On the day of your show, a TodayTix employee will meet you in front of the theater and give you your tickets. TodayTix can be a little bit of a gamble, since they choose the seats for you – although they try to get you the best seats possible. At “Anastasia,” I was seated in the rear mezzanine, but at “Fun Home” I wound up in the very front row.

There are other ways to get discounted tickets, like Broadway Roulette and show-specific lotteries, but I have had the most success with these two. If you are a student, many Broadway shows offer discounted student rush tickets for people with a college or high school ID.

Which seats are best?

“Join us, sit where everybody can see!” – Pippin

Most Broadway theaters have a proscenium set-up, like the layout of your high school auditorium. The stage is on one side and the audience is on another. The Circle in the Square Theater’s layout changes, but it’s usually thrust (the stage sticks out into the audience) or in the round (the audience circles the stage).

Many people think that the closer you are to the stage, the better. In a traditional proscenium theater, that’s not really true. Front-row seats are fine, they’re not bad, but you’ll have to crane your neck to see the whole stage (and the actors might spit on you by accident). You’re really too close to see and appreciate all of the action. My memories of “Promises, Promises,” which I saw from the front row, consist mostly of Kristen Chenoweth’s shoes.

The actual best seats are about 8 or 10 rows back from the stage, in the center orchestra. You’re still super close to the stage, but you have enough perspective to appreciate what’s going on. It’s almost obscene how good these seats are.

Another fantastic option is the front row of the mezzanine. Sure, you’re lofted up above the orchestra, but you also have a panoramic (and completely unobstructed) view of the stage. I failed to get front-row-mezz seats for “Hamilton,” but second-row-mezz was almost as good.

Box seats will not give you a good view – sorry! You’ll essentially only be able to see half of the stage. Usually, they are only available for purchase in-person at the box office. Back rows of the orchestra can also be rough, since the overhanging mezzanine cuts off the top half of the stage. Usually there’s not a lot of action going on in that space, but it still makes the show feel very claustrophobic. 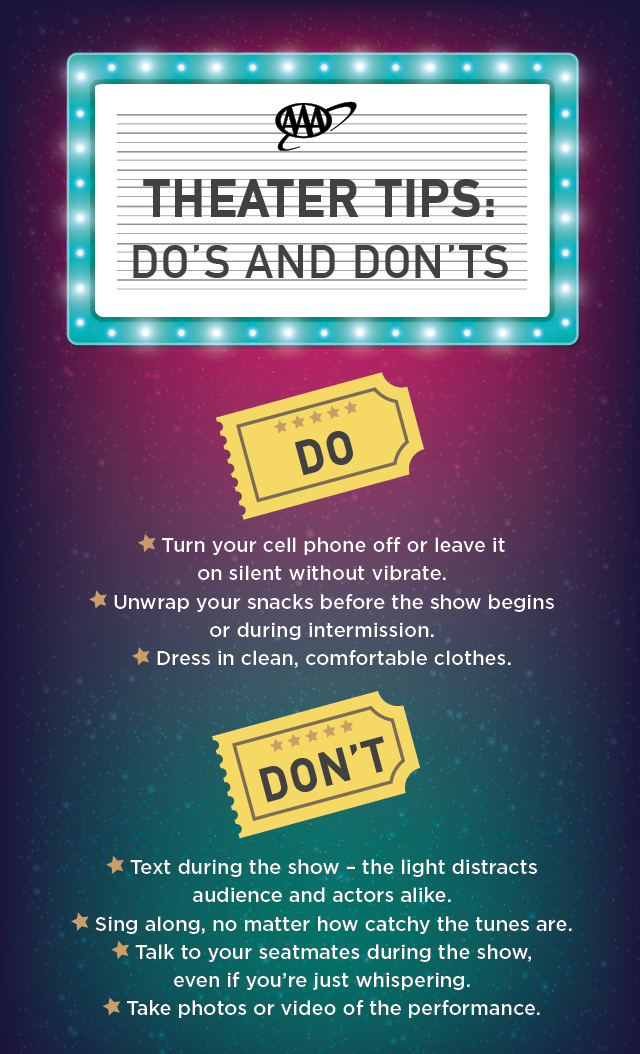 In live theater, suspension of disbelief is very delicate. That’s why many theater etiquette rules revolve around minimizing distractions (to both the audience and the actors). Here are some theater tips that can help everyone in the audience have a good theater-going experience.

Turn it off. Leaving your cell phone on vibrate isn’t good enough, since the buzzing still makes noise. Either keep your cell phone on silent without vibrate or turn your phone off completely. Do not text during the show – the light disturbs the people around you.

Mr. Cellophane. If you have any candies or snacks, make sure to unwrap them before the show starts (or at least refrain from unwrapping them during a serious, silent moment).

Unexpected song. Do not sing along with the show – or even hum. It can be hard, but it’s the right thing to do.

I feel pretty. You don’t have to be in your Sunday finest to go to a Broadway show – but you shouldn’t look like you’re at home eating bonbons either. Dress in clean, comfortable clothes. Jeans and a nice shirt should be just fine (though you can certainly dress up more if you’d like to).

Happy talk. Feel free to chat away with your seatmates before the show, but when the overture starts you should quiet down. Save any of your thoughts and feelings for intermission or after the final curtain.

Save on tickets to your next show.