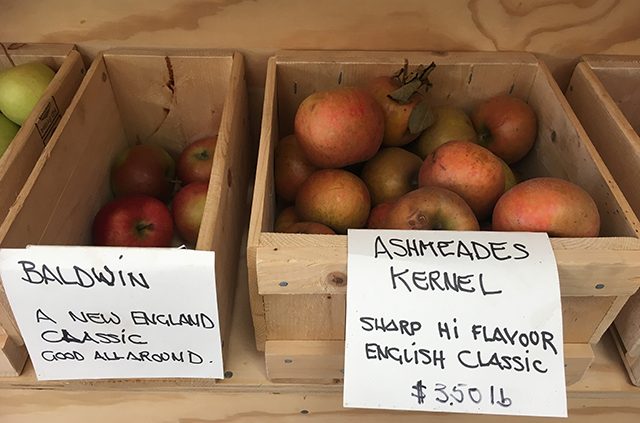 You may know cider as that amber nectar of fall, the sweet elixir of golden days spent apple picking, baking cinnamon-swirled treats and plucking pumpkins fresh from the vine.

Ah yes, you know cider. But how well do you know its cousin of the slightly harder variety?

Hard cider, as its alcoholic cousin is known, is having a moment. Small and large craft cideries are popping up throughout the country – and the world – with the American industry seeing $516 million in sales in 2018, according to the U.S. Association of Cider Makers. It can be at turns bubbly or still, dry and nuanced or sweet and heady and redolent with the scent of just-picked fruit.

Fall is the perfect time to dip into the burgeoning cider renaissance. And luckily for us, there are a bevy to choose from in the Northeast. We’ve picked our favorites and paired them with nearby attractions to help you make the most of the fleeting autumn season. As always, remember to drink responsibly and designate a driver who won’t be imbibing. 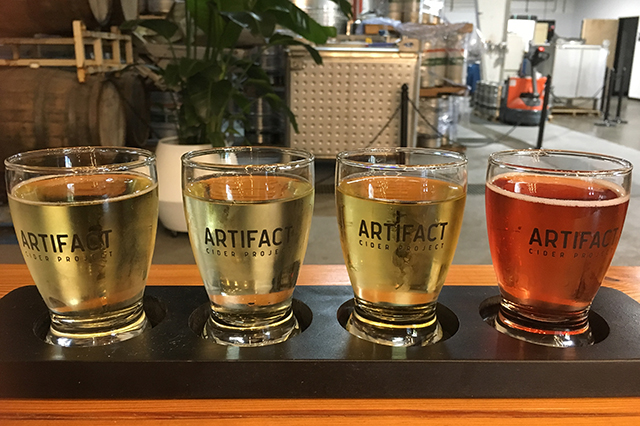 A flight of ciders at Artifact Cider Project in Florence, MA.

Started by best friends Jake Mazar and Soham Bhatt, Artifact Cider Project makes a perfect starting or ending point to a trip to the Berkshires. The welcoming taproom is packed with games (Scattergories, anyone?) and overlooks a warehouse filled with giant vats of cider. On my visit, there were nine different varieties available to sample, including two limited-edition ciders and fresh apple juice from a local orchard. I tried a flight of four 4-ounce samples: Wild Thing, made of McIntosh apples; Taking Flight (my favorite), a sweeter blend of Empire apples; Wolf at the Door, an intriguing mix of sharp notes and Artifact’s house culture; and No New Friends, a tart blend of apple and cranberries. Plus, the music rocks and you can nibble on some tasty flatbreads (try the potato and herb) while you sip.

Pair it with: A stroll down the adjacent Northampton Bikeway to visit the Florence Pie Bar, a charming little eatery serving up sweet and savory pies. Or head to Shelburne Falls, just a half-hour up the road, to saunter through the Bridge of Flowers, a former trolley bridge turned into a linear garden of blossoms.

still stuck in the in-between of blue sky and red leaves and that’s fine. that’s great, actually. we figured this would happen. happens every year. we’ve got aloha (friday & saturday) and pumpkin in the taproom this weekend. photo: @k___elizabeth

Downeast Cider is known for its unfiltered ciders that you shake before drinking, and for the founders’ stellar sense of humor. Consider the driving directions to its Boston shipyard location: “By car – Hop on AOL and print out some MapQuest directions. If you take a wrong turn, may God have mercy on your lost soul.” Friends (we’re sensing a theme here) Ross Brockman and Tyler Mosher founded the company while in college. You can take a tour of the cidery or just stop by the taproom for samples, cans, growlers, kegs – it’s all here. There are eight varieties currently on tap, including the original blend, double blend, pumpkin blend and even a mojito variety. My favorite is the unfiltered original, a sweet cider that smacks of the alcohol-free brew we all know and love. And lucky me still has some of this season’s limited-edition native blueberry cider, crafted with wild Maine blueberries.

Pair it with: So. Many. Options. Head across Boston Harbor to the hip Seaport area and explore the Institute of Contemporary Art with a side trip to Flour to try the famous cinnamon buns with a cult-like following. Or take a water taxi to the Charlestown Navy Yard and visit Old Ironsides (aka the USS Constitution), a wooden-hulled vessel launched in 1797 that serves as the U.S. Navy’s oldest floating warship.

The Clyde family has been pressing hard cider at Clyde’s Cider Mill, a National Historic Landmark, since 1881. The sixth generation is hard at work today, opening the mill every September for a yearly fall-a-palooza. In addition to hard and sweet cider, the mill sells its own apple wine, pumpkins, fudge, apple cider doughnuts, pies, maple syrup, Indian corn and more. Visit on a weekend in October or November, and you can watch cider-making demonstrations and enjoy free tastings.

Pair it with: A slice at Mystic Pizza, the pizzeria that launched Julia Roberts’ career. Or take a step back in time at the Mystic Seaport Museum, where you can check out its fleet of 17 historic ships and see what seafarin’ life was like in years past. 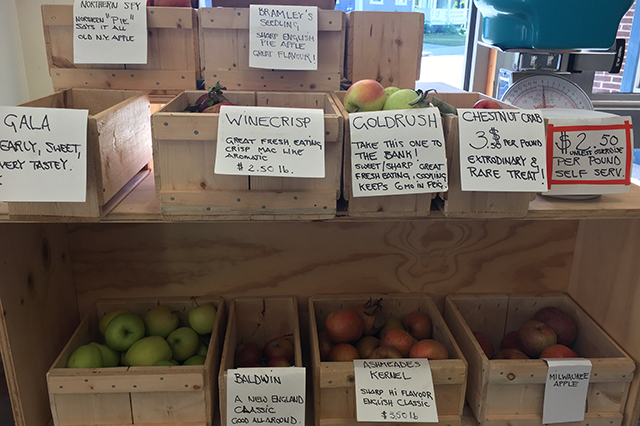 Nestled in a quaint seaside town, Warren Cider Works(now known as Sowams Cider Works Company) is the perfect place to while away a fall afternoon. Owner Spencer Morris grows several kinds of apples, including heirloom and hard-to-find varieties, on his orchard in the Touisset section of Warren. Those that don’t get turned into cider are on display in bins and sold on an honor system when the tasting room is closed. (On a recent visit, I spied varieties I’d never seen on supermarket shelves, like Chestnut Crab, Goldrush and Ashmead’s Kernel.) The inviting, sunny taproom is all windows and wood, open wide to the elements on fine days. Current ciders include Virginia Crab, a variety grown by Thomas Jefferson that yields a dry, crisp drink; Baldwin; St. Edmunds Russet; and Harrison, crafted from a traditional cider varietal. If you’re craving a bite, you can order a cheese plate crafted by local pasta shop Prica Farina.

Pair it with: A jaunt down charming Main Street, filled with boutiques, coffee shops and gift stores. Visit Imagine Gift Store (the one with the cow statue outside) and browse through one of the area’s largest gift stores or make your way down to the old-time soda fountain at Delekta Pharmacy for an authentic coffee cabinet – Rhode Island’s oddly named version of a milkshake. Or visit the aforementioned Prica Farina and bring home some fresh spaghetti, ravioli or gnocchi for dinner.

Don’t forget to enjoy your cider responsibly, and always have a designated driver during your travels. Cheers!

Tell us about your favorite local cideries and ciders in the comments.

Save on fall activities with AAA Discounts.