From Maine to the Ocean State, some of America's most historic treasures are strewn like gems about the Northeast. 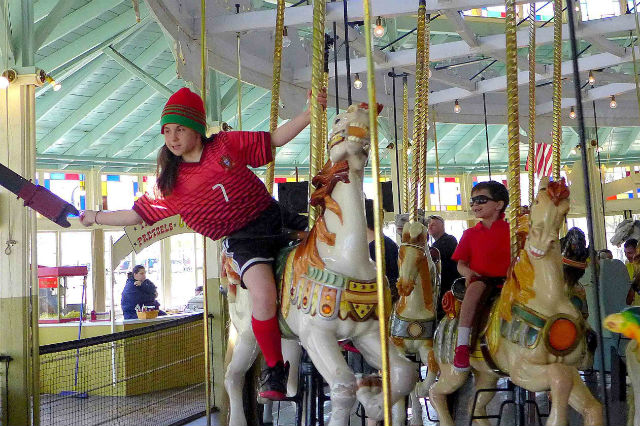 National Historic Landmarks are America’s treasures – the most exclusive list of the nation’s historic places. New England has an unusual concentration of almost 400, in part because so many things happened first here, and in part because we practically invented historic preservation.

Here are 10 National Historic Landmarks in New England sure to make this season especially memorable. (Check the websites before visiting, as many properties keep seasonal hours.)

Designed by Charles I.D. Looff in 1895 and refurbished a decade later when he moved his carousel-building operation from Brooklyn to East Providence, this showstopper features 66 flamboyantly decorated, hand-carved wooden figures. Amusement park owners studied the salesman’s sample to select figures for their own custom carousels. Thanks to a loving restoration by local fans, new generations can still reach for the brass ring.

Not all National Historic Landmarks are old. The Glass House was built in 1949. Despite the all-glass exterior, architect Philip Johnson pointed out that it had a kitchen, living room, dining room and bedroom – just like his grandparents’ house. (But they probably didn’t spend so much time washing windows.) A long, sweeping drive rolls through the verdant 49-acre property until the Glass House magically materializes in the landscape.

The world’s first operational nuclear-powered submarine, the USS Nautilus berths in the Thames River alongside the Submarine Force Library & Museum. Christened in 1954, the 319-foot sub immediately broke records for longest submersion and longest transits without surfacing, proving that nuclear-powered subs were stealthier than their diesel-electric counterparts. The self-guided tour brings home the ingenuity of space management and the claustrophobic sacrifices of submariners.

From 1900 to 1911, young Robert Frost tried farming here. He failed, but the surrounding landscape would haunt his verses for decades. This was where the young family man and chicken farmer grew into one of America’s greatest poets. His voice seems to echo through the farmhouse and orchard and along the tumbledown stone wall, where – perhaps – “good fences make good neighbors.”

Instantly celebrated for his first major commission – a 1881 monument to Civil War Adm. David Farragut – sculptor Augustus Saint-Gaudens soon went shopping for a summer retreat. He transformed the landscape of his New Hampshire estate the way he transformed American public sculpture, giving it a heroic classicism. Copies of some of his finest works dot the grounds, and the creative life of the lion of the Cornish Art Colony shines brightly in his studio.

Even as he rose in national politics, Calvin Coolidge often visited his birthplace. When President Warren G. Harding died suddenly in 1923, a messenger came knocking to notify the vice president. The house had no phone. Nor did it have electricity. The oath of office room preserves the moment when Coolidge’s notary public father administered the oath of office by lantern light with his son’s hand on the family Bible.

Set on a mountaintop amid manicured lawns and wooded glens, Jacob’s Pillow is the oldest major summer dance festival in the country. Founder Ted Shawn, a modern dance pioneer, with his wife and partner Ruth St. Denis, purchased the land in 1931 and summer programs began in 1933. The festival presents leading choreographers and troupes as well as rising stars of the avant-garde. The main stage opens to the woods behind it, and free Inside/Out performances take place in an open-air amphitheater.

Winslow Homer spent the last 26 years of his life – 1884 through 1910 – painting at Prouts Neck, a rocky knob jutting out into Saco Bay. That work came to define the rocky coast of Maine in American art. Guided tours bring the artist to life in this national landmark where he painted numerous watercolors and oils, including his masterpiece “Weatherbeaten,” now in the Portland Museum of Art.

In the 1890s, the Metropolitan Parks Commission rescued this striking 3-mile-long crescent beach from destructive development. With the addition of a carriage road, bathhouses and several pavilions, Revere Beach soon opened as America’s first public beach. It was badly damaged in the Blizzard of ’78, but its facilities were painstakingly restored, becoming a National Historic Landmark in 2003. Since 2004, it has hosted the New England Sand Sculpting Competition.

– Patricia Harris and David Lyon are authors of “Historic New England: A Tour of the Region’s Top 100 National Landmarks.”