Head to the New England Harvest Feast at Plimoth Plantation

Enjoy 17th-century food and entertainment at the one-of-a-kind Harvest Feast. 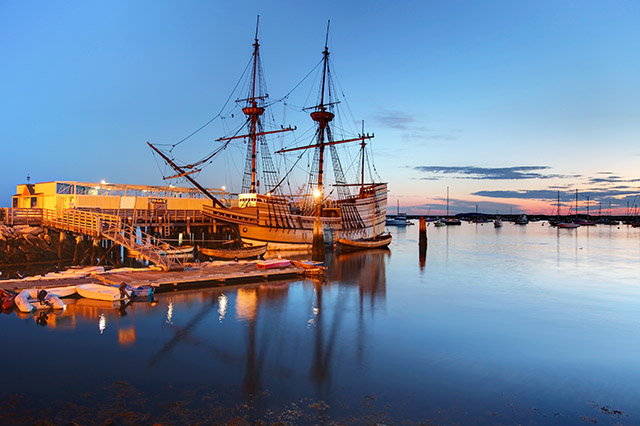 What better way to get in the Thanksgiving mood than going back in time to enjoy a recreation of the first Thanksgiving. The Plimoth Plantation, located in Plymouth, Mass., is a living history museum with outdoor and indoor learning environments dedicated to telling the stories of two distinct cultures – English and Native. Each year, Plimoth Plantation hosts a New England Harvest Feast on certain days in November. Here’s what guests can expect.

Note: Due to the ever-changing nature of the COVID-19 pandemic, please see official website before visiting to check for rules and restrictions.

The Plimoth Plantation is the realized dream of Henry Hornblower II. The Boston native was fascinated by American history and archaeology. Hornblower spent his boyhood summers at his family’s summer house in Plymouth. He quickly grew an interest in the area, and the new relationship between the Pilgrims and the native Wampanoag people.

Under Hornblower’s visionary leadership, the Plimoth Plantation opened in 1947, telling the iconic story of Plymouth Colony. At first, it consisted of two English cottages and a fort on Plymouth’s historic waterfront. The museum has grown to include Mayflower II (1957), the English Village (1959), the Wampanoag Homesite (1973), the Hornblower Visitor Center (1987), the Craft Center (1992), the Maxwell and Nye Barns (1994) and the Plimoth Grist Mill (2013).

All of these exhibits and learning experiences built on thorough research about the Wampanoag People and the Colonial English community in the 1600s.  The museum’s offerings are rounded out by a host of special events, public programs and workshops that offer a rich and diverse exploration of the 17th-century.

So, what exactly can you expect from a 17th-century meal?

Plimoth Plantation’s menu begins with cheate bread and butter with wood-pressed cider. The first course consists of a sallet of herbs; mussels seeth’d with parsley and beer; a dish of sauc’d turkey; a pottage of cabbage, leeks, and onions; and a sweet pudding of native corn.

The second course features stew’d pompion (pumpkin); a chine of roast’d pork, fricassee of fish, cheesecake made with spice and dried fruit, and a charger of Holland cheese and fruit.

Due to the COVID pandemic, tables will seat only six people and plated entrees will be served.

As guests dine on their meals, a host will guide them through each item on the menu. Historical experts will also be on hand to answer questions about England and Plymouth, then and now.

During dinner, visitors will also get a taste of 17th-century entertainment. This includes performances of centuries-old psalms and songs.

A ticket to the event includes admission to several buildings and attractions. (Click here to see the museum’s COVID guidelines.) The Wampanoag Homesite is a representation of how the Wampanoag would have lived in the 17th-century – planting crops, fishing and hunting, gathering wild herbs and berries for food, and reeds for making mats and baskets. Unlike the people in the 17th-Century English Village, the staff in the Wampanoag Homesite are not role players. They are all Native People – either Wampanoag or from other Native Nations.

The 17th-Century English Village is a re-creation of the small farming and maritime community built by the Pilgrims along the shore of Plymouth Harbor.

Guests will also have access to the Plimoth Grist Mill, which tells the story of the corn grinding mill built by the Pilgrims; the Nye Barn, home to livestock that represent the types of animals found in Plymouth Colony in the 17th century; and the craft center, where visitors can get a glimpse into the historic crafts and technologies that allow the museum’s artisans to vividly recreate the look and feel of the 17th century.

And, of course, visitors can also check out the newly restored Mayflower II, an authentic reproduction of the ship that brought the Pilgrims to Massachusetts in 1620.

Have you been to Plimouth Plantation or the New England Harvest Feast? What were your favorite experiences? Let us know in the comments below!

Get exclusive savings on more fall entertainment and attractions with AAA.