The Avenue Concept commissions artists to create street art in Providence, adding beauty and inspiration to the city's public spaces. 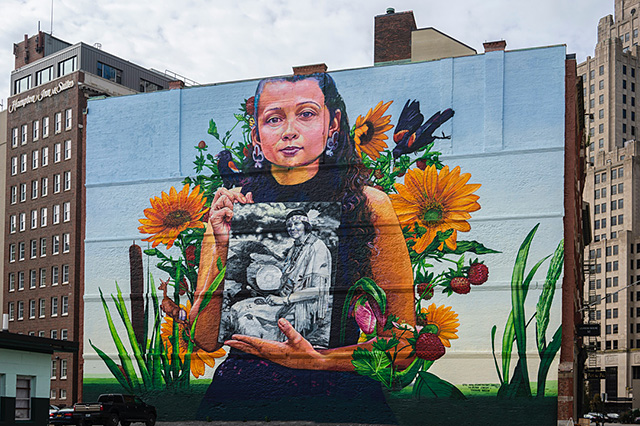 Yarrow Thorne wants to make Providence a more beautiful place – but to him, that means a lot more than putting up a few murals. It means creating art that serves a public good, not just for the city itself, but for the people who live in it and the visitors who come to see it, by setting up long-term projects aimed at inclusivity.

“It doesn’t matter what language you speak,” Thorne said. “You can walk by a piece of art and be inspired. Hopefully other people are seeing that and meeting other people with similar ideas and interests.”

On paper, his nonprofit, The Avenue Concept, does a simple thing: It commissions artists to create public works in the city of Providence. In reality, though, installing public art is a much bigger project than it seems. There are permits to pull and safety concerns to insure against, workers to hire and artists to find who are experienced enough to lead the vision. The art needs to both resonate with the people who live in the city and attract international attention, so that more donations will come in for future projects. And let’s not forget that all of this art is outdoors; even if it weathers the elements well, it will inevitably need maintenance and upkeep and people will eventually lose interest and look for something else to connect with.

But when you walk past a three-story mural of a girl walking through a door into a magical, psychedelic world – like “Adventure Time,” by Polish artist Natalia Rak, on the side of the George C. Arnold Building – the benefit is undeniable.

“Our goal is to figure out how art can inspire community, and build an environment where people can be inspired,” Thorne said.

A New Way of Seeing Art

The idea for The Avenue Concept started when Thorne was a student at the Rhode Island School of Design, where he helped develop the school’s first public art program. Once school was over, he expanded the project to the entire city, with the goals of creating beautiful art that changes with an evolving city landscape and encouraging city planners to think more creatively about how to build that art into existing development projects.

“If you’re going to tear up a plaza, let’s install power underneath so you can have uplighting on trees and events outside,” Thorne said.

To date, the nonprofit has installed 170 pieces of art in Providence. The large-scale murals are the most visible, but there are also smaller murals, sculptures and things that might not immediately seem like art installations, like public gardens.

You’ll find one of those downtown on Exchange Terrace. It’s a bioswale, a landscape design that captures water runoff that would normally go into the street and uses it to water the plants. It surrounds Cosmic Flower, a kinetic sculpture by Emmett Square made of reflective roadside tape that interacts with lights from passing cars. The sculpture is installed on a pad that will allow new works to be easily installed, saving on future costs and allowing for a more affordable reimagining of that space.

The Avenue Concept’s first order of business was to create one of those new ways. “We turned the back of our building into a legal graffiti wall,” Thorne said. “People can come and paint whatever they want.” He said that 15-20 artists come to add to the Lockwood Street space every day, and that every continent has been represented. “In a lot of cases,” he said, “we find artists that way.”

While it’s important to them to use artists who will bring Providence outside attention and attract tourism dollars, it’s also a top priority to support and engage the 10,000 artists who live in the state. For a project in the corridor between Classical and Central high schools on the West Side, The Avenue Concept had alumni from the schools work with students. “Every mural there has curriculum tied to it,” Thorne said, so teachers can bring students outside and show them how the art connects to what they’re learning.

Another way they’re supporting local artists is through a 2D local working residency, which gives artists a public canvas to tell a story. “Party Shark,” by Sam O. White, came from that residency. It’s a painting of a pixelated pink and purple shark that speaks to the idea of overblown fears. The mural is broken up across five open archways, tucked away in a preserved building facade downtown on Weybosset Street.

“We want art to be hidden,” Thorne said. “We want people to walk out from PPAC at a show and see what murals they can find. Hopefully in the process they buy a coffee or learn about a new store.”

“Misty blue” providence, Rhode Island. Thanks to @avenuepvd and @inoperable for the opportunity.

The most recent project is “Still Here,” a mural on the side of 32 Custom House St. that depicts a young girl holding a portrait of Princess Redwing, a Narragansett and Wampanoag tribe elder and historian. The work was created in partnership with Baltimore-based artist Gaia and the Tomaquag Museum in Exeter, RI.

Thorne estimates that each mural generates about $100,000 for the city from people coming in to look at them, and then doing other things in the city while they’re here.

“We know people are moving here because of the murals,” Thorne said. “They compare Providence to Boston and they see a place where they want to live and raise a family.”

Thorne also sees public art as a way to unite the 15 different neighborhoods in Providence and to help people find connections across cultures. Muralist Andrew Hem, whose parents fled the Khmer Rouge in Cambodia, worked with Providence’s Cambodian community in coming up with “Misty Blue,” a painting of a Cambodian girl in a forest.

He changed it based on feedback from people in the community, Thorne said, noting that the project allowed many in the Cambodian community to feel a new sense of connection to downtown Providence.

“We want to think of ways to bring all the different people together,” Thorne said. “The local talent here is really strong, but not a lot of Rhode Islanders get a chance to get out of Rhode Island. By bringing in outside talent we can show people here what’s going on in the rest of the world, and we can attract international attention.”

That recognition is the kind that will keep donations coming in and keep tourists excited about Providence, and ultimately help make it the kind of world-class city it’s on the path to becoming.

More than a dozen artworks are on display as of April 2019. Click out this map to see where they’re located.