The Radio City Christmas Spectacular is holiday fun for the whole family. 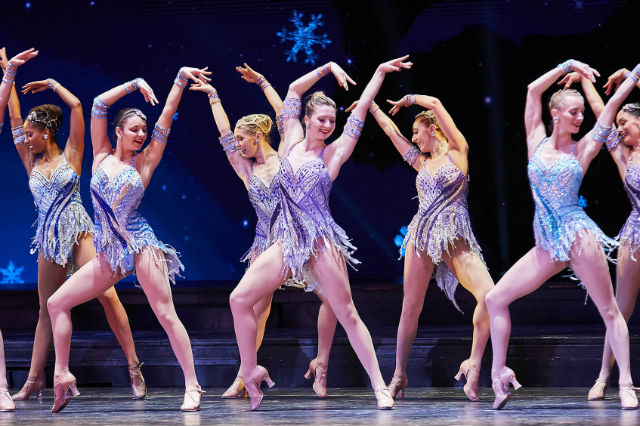 There’s no better place to be than New York at Christmas. Sure, the streets are even more crowded, choked with tourists and pedestrians and sightseers from Westchester. It’s freezing, too. Everyone is bundled up tight, shuffling through crowds like a herd of marshmallow people.

Yet still, Christmas is when New York has reached its peak, when it cannot possibly be New Yorkier. The Rockefeller Center Christmas tree goes up. Wollman Rink is opened and immediately flooded with showoffs who actually know how to skate. The windows at Saks Fifth Avenue and Bergdorf Goodman’s are decorated; the Winter Village in Bryant Park is opened. Yet, all these things pale in comparison to the crown jewel of New York at Christmastime: The Christmas Spectacular Starring the Radio City Rockettes.

I had the good fortune of attending the opening night of the Christmas Spectacular, and it was all I could have ever dreamed of.

The Radio City Christmas Spectacular has been running every Christmas season since 1933, helmed by the world-famous precision dancing troupe, the Rockettes. The Rockettes are not only dancers; they are athletes, dripping in sweat and grease paint. From the audience, though, you don’t see sweat. All you see is sparkle.

“It’s incredible,” says Rockette Alicia Newcom, “To be dancing and look around and see that we’re all moving as one.”

When we spoke, Newcom was performing in her second season as a Rockette. Talking about the show, she was bubbly and effervescent.

“Two of my [dance] teachers growing up were actually Rockettes, so it’s something I’ve always dreamed of doing,” she says. “I love performing in front of people, especially being part of this production. People come here to make time for joy.”

Like many Christmas mainstays, one of the joys of the Christmas Spectacular is its sense of history and tradition. The Rockettes themselves are often described as a sisterhood, a kind of sorority filled with ultra-talented, dedicated performers.

The Christmas Spectacular is filled with iconic numbers, but perhaps the most cherished is the “Parade of the Wooden Soldiers,” in which the Rockettes are dressed as toy soldiers and do a series of increasingly complex marches.

“‘Parade of the Wooden Soldiers’ has been in the show since 1933,” Newcom says, “And every single Rockette who has crossed that stage has done it. People return to see these numbers year after year.”

During “Parade of the Wooden Soldiers,” the opening night audience suddenly transformed. It felt like we were at a rock concert. It was obviously the number that everyone had been waiting for. When the Rockettes started to do their long, choreographed domino fall, everyone in the room held their breath. As the last soldier fell, the room broke out into thunderous applause.

One of the most interesting things about the Rockettes is their glittery mystique. Everyone has some theory about how they do what they do, since it seems almost like magic. While interviewing Alicia Newcom, I sheepishly voice a rumor that I had heard growing up in New York.

“Is it true all of the solider helmets are different heights depending on how tall the dancer is?” I ask.

Newcom laughs slightly, politely, and says, “That’s a good question! The soldier hats are all the exact same height. The shortest Rockettes…” she pauses, then laughs again and corrects herself. “Should I say ‘the less tall Rockettes?’ We’re all pretty tall! Well, the shortest Rockettes are on the end and the tallest are in the center. That’s how we give the illusion that we’re all the same height.”

Sometimes, though, the truth can be even stranger than the rumors. The Rockettes’ tap shoes are all fitted with their own microphones, so that everyone in the audience can hear them. The Rockettes actually pull Santa’s sleigh while they play the part of his reindeer. The live animals for the living Nativity scene (sheep, donkeys, camels) all live in Radio City for the season, and are taken on walks around the building every morning and evening.

“It’s totally immersive. Honestly, I think it’s really exciting because it transforms that show, and brings together all of the different elements. You look out and see these gorgeous projections out over the whole theatre.” Newcom says. “It’s really just a beautiful production.”

Having worked at Disney, I thought I’d seen everything projection-mapping possible. But when I was in the audience, the beautiful projections across the proscenium arches of Radio City took my breath away. I grabbed my friend’s arm and jabbed my finger up at the ceiling, saying “LOOK!”

Along with the rest of the audience, I was completely overwhelmed.

The new finale for 2019, dubbed “Christmas Lights,” also incorporates aerialist performers and drones into the show.

Whether you’re 2 or 92, The Radio City Christmas Spectacular is the perfect way to celebrate the holiday season.

There’s no better time to see the holiday magic onstage at Radio City. After all, it’s Christmas time again in NYC!

Staying the weekend? Plan your trip to NYC to see the The Christmas Spectacular Starring the Radio City Rockettes and book a hotel with AAA.