Find a Renaissance Fair Near You

Get ready to dust off your puffy shirt and don your muffin hat – early fall is Renaissance fair season in the Northeast!

0 COMMENTS
Day Trips » Find a Renaissance Fair Near You 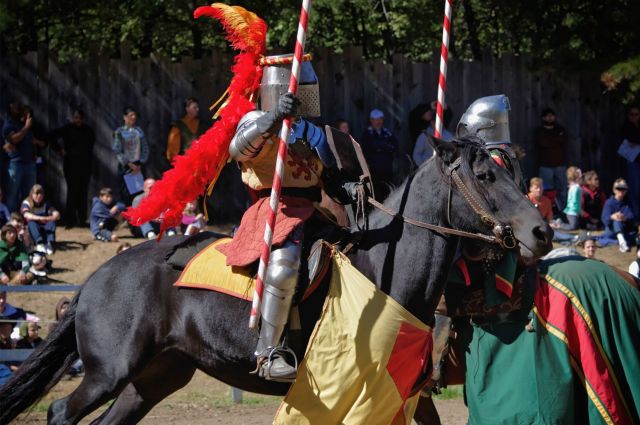 Late summer and early fall is Renaissance fair season in our neck of the woods. Whether you’re a ren fair newcomer or an Elizabethan junkie, it’s time to dust off your puffy shirt and don your muffin hat.

The Renaissance fair, a uniquely American pastime, exists somewhere between a state fair, a comic book convention and a living history museum. The smallest fairs last a day or a weekend in a public park, while the largest fairs can last several months and have permanent fairgrounds.

My local fair is the New York Renaissance Faire in Tuxedo Park. I love it so much that if it was even more local, I would probably be living there. Renaissance fairs appeal to me on a molecular level, targeting the parts of me that are still an 8-year-old girl reading dog-eared fantasy novels. The Renaissance fair is a fantasy, focusing on fun and festivities rather than any sort of historical accuracy. Renaissance fairs are filled with pirates, elves and fairies hobnobbing among the likes of Queen Elizabeth I and William Shakespeare.

A Renaissance fair is usually comprised of a marketplace full of merchants and artisans selling period-appropriate items and handicrafts, actors and actresses milling about the lanes in character, and entertainment on a variety of stages. The best and biggest ren fairs have a joust.

To have the most fun at a Renaissance fair, I suggest coming in costume. Peasants and pirates are the easiest ensembles to cobble together, but many fairs offer same-day costume rentals as well. It is important, however, that you don’t sacrifice your safety for historical accuracy. Make sure your costume doesn’t make you overheat in the late summer sun, and that your footwear is supportive and comfortable. Don’t tie your corset too tight!

Many fairs allow period-appropriate weapons like knives and swords, but they must all be peace-tied so that they cannot be unsheathed. Good fairs don’t let you poke each other’s eyes out, no matter how cool your new dagger is.

Here are some of the best current and upcoming Northeast Renaissance fairs this season.

The New York Ren Faire is held annually in Tuxedo Park, on weekends from August to late September. The Renaissance fair is presided over by a young Queen Elizabeth I, and protected by Robin Hood and his merry men. The Robin Hood plot line plays out in different locations over the course of the fair day, with the joust as the finale. This is a huge, sprawling fair that has permanent fairgrounds and a stable of amazing actors and performers. Take a look at my visit in the video above.

King Richard’s Faire in Carver, MA runs on September and October weekends, including Labor Day and Columbus Day. Best of all, AAA members can save up to $4 on admission. Enjoy bards, acrobats, fire-eaters, puppeteers and more on eight different performance stages in the fictional land of Carvershire. The fair even has a big cats show, with a white lion and tiger cubs. There are plenty of opportunities for fairgoers to get involved in their variety of contests determining who will get to accompany King Richard himself on the joust dais. Check out our chat with the king and queen of the fair!

Fort Tryon Park’s Medieval Festival in New York City is a one-day-only event (Sept. 30), but it’s not small by any means. With crowds of up to 60,000 fairgoers, the festival transforms Fort Tryon Park into a bustling medieval marketplace. You can see shows, buy amazing artisan goods and interact with a variety of costumed characters. And here’s the best part: Festival admission is free.

The Connecticut Renaissance Faire, otherwise known as the King Arthur Harvest Faire, has a main storyline themed around the Knights of the Round Table. That’s not all, though. Weekends from September through October, it offers a built-in live action role-playing element, which pulls you into the world of the fair and allows you to choose a class and level up your fair persona. It has the usual fair fare, like merchants and wandering characters, as well as more unique features like a living history encampment and a knight school.

On Sept. 21-23, come visit one of the largest and most diverse Scottish games in North America. This fair celebrates everything Gaelic, from bagpipes to kilts to caber tosses. There is a large living history element to the festival, as fairgoers can interact with their living history Scottish encampment. There are also merchants, artisans, and authentic Scottish foods and dancers.

Speaking of pirate invasions, the Eastport Pirate Festival invades Maine for one weekend every September. This year, the festival will take place Sept. 6-8. Pirates have always been present in the marginalia of Renaissance fairs, but this fair puts pirates at the center. There are boat races, costume contests and a pirate ball. Prospective pirates will love the cutlass and cannon demonstrations, as well as the crowning of the pirate king and queen.

On weekends through Oct. 27, the grounds of Mount Hope Estate play host to the Pennsylvania Renaissance Faire. Ruled over by Henry VIII and Catherine of Aragon, the fair offers over 90 stage shows to entertain and immerse fairgoers into its world. Costumed characters mill about the fair, filling the grounds with laughter, dance and song. Each weekend of the fair has a different theme, from a pirate invasion to an Oktoberfest celebration.

For information on inns and keeps in which to take shelter throughout thine journey, visit ye olde AAA.com/Hotels.