Your Guide to the Newport Mansions

Slip on your walking shoes for a tour of Newport mansions and get an inside look at some of Rhode Island's most opulent estates.

0 COMMENTS
Day Trips » Your Guide to the Newport Mansions 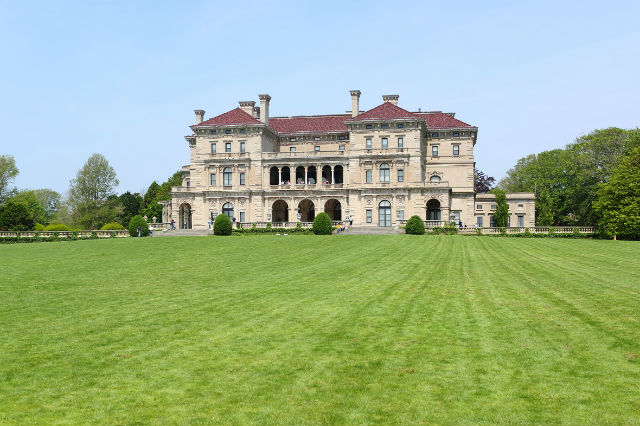 If you’re looking for a weekend getaway, the extravagant Newport mansions are a way to experience exceptional elegance and inspirational 19th century architecture close to home.

The historic-house museums (once summer homes and entertainment venues for America’s free-spending millionaires) are located on 88 acres of gardens and parks on cliffs overlooking the Atlantic Ocean. You can explore these historic sites in person with the help of audio tours designed to shed light on the wealthy residents who once inhabited these breathtaking properties.

Two- and five-house tickets are available through the Preservation Society of Newport County, which cares for most of the opulent properties on and around Bellevue Avenue that showcase the stunning European-inspired architecture of the gilded age. Most are open daily during the spring and summer months; check the website for current hours. Wear comfy shoes, print out a Newport mansions map and gear up for a journey through time unlike any other.

FIND & BOOK A HOTEL WITH AAA IN NEWPORT, RI

The largest and most lavish of the historic Newport, Rhode Island mansions, The Breakers is the onetime summer retreat of Cornelius Vanderbilt II – grandson of family patriarch Commodore Cornelius Vanderbilt, who made his fortune in the booming American railroad and shipping industries. The mansion served as a status symbol of his family’s social and financial prominence, which was estimated at $200 million 130 years ago. Rebuilt in 1893 after a fire, no expenses were spared in constructing this $7 million, 70-room Italian Renaissance-style palace with lavish furnishings, platinum wall panels and an open-air courtyard that sports a ceiling painted with a windswept sky. This half-acre, four-story mansion sits on 11 acres overlooking the Atlantic Ocean. It also features a $5.5 million Welcome Center, which opened in June 2018 in a newly rehabilitated garden. There visitors can find refreshments, restrooms and places to sit for a spell.

Built between 1888 and 1892, this magnificent marble marvel was a 39th birthday present from William K. Vanderbilt to his wife, Alva. Their “temple to the arts” was designed in the fashion of the Petit Trianon at the Palace of Versailles and of its $11 million price tag, $7 million was spent on 500,000 cubic feet of marble. The Vanderbilts later divorced and Alva used the property to host rallies for women’s voting rights before selling the house to Frederick H. Prince in 1932. Its centerpiece Gold Room stays true to its name, with 22-carat gold leaf wall panels and Tiffany glass accents.

With rooms featured in movies like “The Great Gatsby,” “True Lies” and “27 Dresses,” Rosecliff was the 1890s summer home of Nevada silver heiress Theresa Fair Oelrichs. Modeled after the Grand Trianon garden retreat at Versailles, the $2.5 million mansion was frequently used as an event space for lavish parties and once hosted a famous party with a performance from magician Harry Houdini.

Another showcase of High Victorian architecture, furniture, wallpapers and ceramics, Chateau-sur-Mer  (which means castle on the sea) was known as one of the most lavish residences in the area prior to the construction of the Vanderbilt mansions in the 1890s. It was the location of a famous picnic in 1857 with more than 2,000 guests. Like a few homes on this list, owner William Shepard Wetmore (who made his fortune in the China trade and used the home in his retirement) hired architect Richard Morris Hunt to remodel and redecorate the mansion in Second Empire architectural style, and for that reason it displays many of the major design trends of the 19th century.

The oldest and most northern topiary garden in the nation, this small country estate in Portsmouth, RI dates back to the 1870s, when it was purchased by Thomas E. Brayton, treasurer of the Union Cotton Manufacturing Company in Fall River, MA. Under the supervision of gardener Joseph Carreiro and his son-in-law George Mendonca, it has more than 80 plants trimmed and clipped to resemble shapes like animals, birds, and geometric figures. Roam around the garden to see cute plants shaped like bears, giraffes and more. Plus vegetable and herb gardens and, of course, the Victorian house that was home to Brayton’s daughter, Alice, until her death in 1972. Green Animals is open seasonally, so call ahead to make sure they’re open. It’s located in Portsmouth, about a half-hour ride from downtown Newport.

Public transportation to the Newport Mansions is available through the Rhode Island Public Transportation Authority (a cute trolley, No. 67 on the Yellow Line). Plus, the Breakers, Marble House, the Elms and Rosecliff are all partially wheelchair accessible. And with astonishing views inside and out, there is certainly no shortage of reasons to make the Newport Mansions the location of your next weekend getaway.

AAA members can get $1 off narrated bus tours of Newport and the mansions.