Plus, more of what’s new and what’s returning to Walt Disney World in 2022. 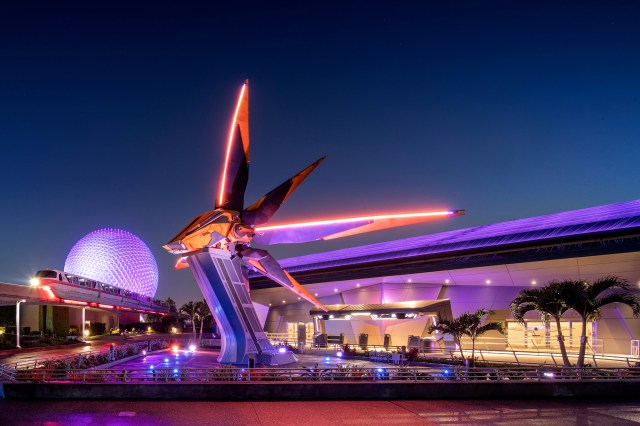 There is always something new to get excited about at Walt Disney World, especially this year as the resort celebrates its 50th anniversary.

A few long-awaited attractions are finally up and running, and the revamped and improved EPCOT is starting to take shape. Here’s the latest, including a peek at the Guardians of the Galaxy: Cosmic Rewind roller coaster, which opened to the public on May 27.

So, without further ado, here are five things to look forward to on your next Disney trip.

Guardians of the Galaxy: Cosmic Rewind

I had a chance to preview EPCOT’s latest headliner attraction during media days and I can tell you that it’s action-packed, lots of fun and does a superb job of integrating the irreverent and funny elements of the “Guardians of the Galaxy” movies.

Throughout the queue and pre-show, riders are introduced to life on Xandar and its people – first at The Galaxarium and then in the Xandar Gallery. Finally, upon entering the Phase Chamber, thanks to the Cosmic Generator, guests are transported to a Nova Corps Starcharter cruiser orbiting planet Earth.

When things go wrong, riders find themselves on an intergalactic chase through time and space. Thankfully, the heroes of Xandar, including Star-Lord (a.k.a. Peter Quill) and his friends Rocket, Groot, Drax and Gamora, arrive to save the day!

Plan your next Disney vacation with AAA.

I am no hero when it comes to riding roller coasters. I worry about intense drops, rotating ride vehicles and the dreaded reverse launch. However, while all this happens, it doesn’t feel too intense. What sold me was that the ride is incredibly smooth and funny, and the accompanying 1980s music sure helps.

The ride has six main songs (“Disco Inferno,” “Conga,” “Everybody Wants to Rule the World,” “September” and “One Way or Another”), but guests also hear different songs each time they ride. During my first ride, I was treated to “I Ran” by A Flock of Seagulls, and my next ride featured Blondie’s “One Way or Another.”

Cosmic Rewind is Disney’s longest fully enclosed coaster and its first to feature a reverse launch. The ride is located at the newly renamed World Discovery neighborhood in EPCOT. The 200,000-square-foot building has a track length of 5,577 feet and is climate controlled. The 20-person ride vehicles are on a controlled rotation, making sure you are always focused on the story.

Disney labels Guardians of the Galaxy: Cosmic Remind as a family-friendly ride. It is, however, not for the faint of heart and not the best choice if your child has never experienced a roller coaster before. If your child can handle Space Mountain and Expedition Everest, go for it! The height requirement is 42 inches.

Could one have wanted more? I would have loved it if the Cosmic Generator would have created more movement in the Phase Chamber, and there was certainly enough space through the queue and gallery to maybe add some Guardians of the Galaxy animatronics.

You can shop for Guardians of the Galaxy-themed fashions, accessories, collectibles, home decor and toys at the Treasures of Xandar shop. After all, who can resist a Groot plush?

For now, you must join a virtual queue via Disney’s app to experience this attraction. There is no standby line. The ride does offer Individual Lightning Lane access (for a fee).

Check out these Disney World hacks to make the most of your trip.

If you want to know what it feels like to dine with panoramic views of Earth as a backdrop, you don’t want to miss EPCOT’s new space-themed restaurant. The fine dining Space 220 is in the World Discovery neighborhood and offers prix fixe menus in the main dining room, while the lounge and 10-seat bar provide a choice between prix fixe and à la carte menus.

A special simulator elevator transports guests to and from the Centauri Space Station. A walk past a hydroponic space garden and a wine room leads to the lounge and main dining room. A giant “window” (a 250-foot digital screen) offers daytime and nighttime views of Earth. A special sensor on top of the building is connected to the digital screen and your views of Earth change depending on what time of day you dine.

On the menu is upscale contemporary cuisine. I dined at the bar and started with an Atmospritz, an orange and Aperol cocktail with Prosecco bubbles, topped with a cotton candy cloud. With my tuna tartare starter and salmon entrée, I enjoyed a Lightyear Lemonade, which comes with a pack of Space 220 collectible trading cards (as do all non-alcoholic drinks).

The lunch prix fixe includes an appetizer and an entrée for $55 per adult/$29 for children and dinner also includes a dessert for $79 per adult/ $29 per child. It is pricy, but you pay, of course, for the experience.

Reservations for the dining room and lounge are in high demand. A standby queue for the bar is available for walk-ins, but the wait will eat precious minutes from your touring time.

This trackless dark ride is located in “Remy’s Paris,” an expansion of EPCOT’s France Pavilion in World Showcase. Remy’s Ratatouille Adventure adds another much-needed family-friendly attraction to the park. When it opened on October 1, 2021, it was the first all-new major attraction at EPCOT in more than a decade – and the first in World Showcase since 1988.

The ride is based on the 2007 Pixar movie “Ratatouille.” Guests, shrunk down to the size of rats, dash through Gusteau’s famous Paris restaurant where Chef Skinner is trying to catch Remy and his friends. To give guests a rat’s-eye view, Remy’s Ratatouille Adventure has oversize props, including a 20-foot-tall ham hanging inside the fridge at Gusteau’s. The ride includes 3D films on room-size screens with large, detailed ride-through sets, in addition to some water and heat effects. The duration of the ride is just under five minutes.

The ride vehicles seat up to six guests in two rows of three and there is no height requirement, but this is a very popular ride and long lines form soon after park opening. In addition to the stand-by line, the ride offers Individual Lightning Lane. Guests staying on Walt Disney Property can purchase Individual Lightning Lane access at 7 a.m. on the day of their visit. Off-property guests can do so at official park opening. Prices vary daily but range between $8-$12 per person. If you want to ride stand-by, arrive at the International Gateway entrance to the park at least one hour prior to park opening and make your way directly to the attraction.

Even More To Look Forward To

Drawn to Life Presented by Cirque du Soleil and Disney

Make sure to arrive on time. About 15 minutes before showtime, there is a fun pre-show where four lucky children are chosen from the audience and led to the stage where they can draw. The drawings are later shared with the audience.

Drawn to Life tells the story of Julie, who, according to Cirque du Soleil, is “a courageous and determined girl who discovers an unexpected gift left by her late father: an unfinished animation piece.” Throughout the show, Julie is led by a magical pencil and muses, all helping her to learn the principals of animation, including the hard work it requires and the process of overcoming self-doubt.

Disney-inspired drawings come to life and are interwoven with aerial acrobatic acts, projections of animated sketches, a Russian swing, a breathtaking performance on a double wheel, live music, fairies on unicycles, puppetry, an aerialist on a suspended pole and more.

Like all good stories, Drawn to Life also has a villain, albeit a somewhat lovable one. A giant wadded-up piece of paper called Miss Hésitation (with an eraser purse for added effect), shows up whenever Julie has self-doubt. At times Miss Hésitation is accompanied by her minions, carrying wastebaskets filled with crumpled-up drawings.

My favorite part is the hand-to-hand act in which Julie imagines her parents dancing. The act, often referred to as “magie nouvelle,” is so tender and seems to defy gravity. The creative expression in this physical duet was so ethereal, it brought tears to my eyes.

Drawn to Life is storytelling at its best. The acrobatics, costumes and choreography are a unique love letter to Disney Animation, and it is pure magic. I’ve seen the show twice and would not hesitate to return.

Shown Tuesdays through Saturdays, the show is 90 minutes long, with no intermission. Tickets start at $85.

Harmonious at EPCOT and Disney Enchantment at the Magic Kingdom are two new nighttime spectaculars with plenty of fireworks, music and projection effects not to be missed.

Daytime shows A Celebration of Festival of the Lion King at Disney’s Animal Kingdom, Beauty & The Beast Live on Stage, For the First Time in Forever: A Frozen Sing-Along and Indiana Jones Epic Stunt Spectacular! at Disney’s Hollywood Studios have returned.

And, at the Magic Kingdom, the Festival of Fantasy Parade and Mickey’s Magical Friendship Faire are back.

Guests can also enjoy character meet-and-greets once again, hugs and all!

Replacing Finding Nemo – The Musical, Finding Nemo: The Big Blue…and Beyond! is set to open in the summer of 2022 at Disney’s Animal Kingdom Theater in the Wild. The 25-minute show incorporates live performers and puppets with stage sets that include a 32-foot-long sunken submarine and a 15-foot-tall fish tank volcano.

And later this year, Fantasmic! will make its much-anticipated return to Disney’s Hollywood Studios.

Start planning your next Disney vacation with AAA.

Which new Walt Disney World attraction are you most excited about? Will you ride Guardians of the Galaxy: Cosmic Rewind? Tell us in the comments.