Discovering the Balkans With Club Adventures 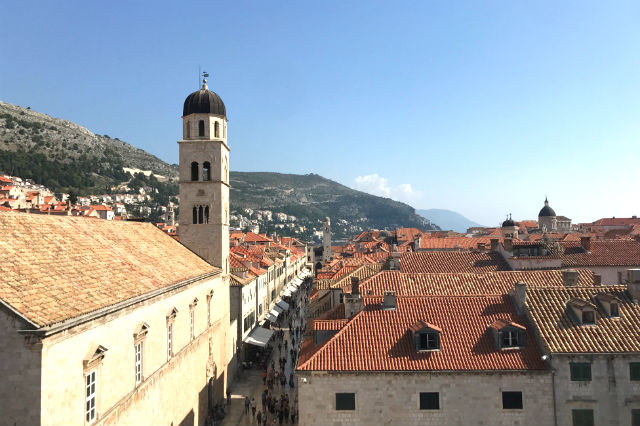 When I stumbled off the plane in Belgrade, Serbia, I was jet-lagged and haggard, but ready for an adventure. I was one of the lucky few who got to head out on Club Adventures’ first tour, and I had packed accordingly. Though I would be spending 8 days touring the Balkans, I’d only brought a backpack and a Club Adventures tote bag.

Club Adventures, powered by AAA Exclusive Vacations, is a brand-new tour operator focused on culturally immersive and adventurous travel opportunities. Joining me on their maiden voyage were Bethany Hodge – the Travel Product Manager for Club Adventures (AKA the architect behind all of their trip itineraries), Lucas Bialecki – Club Adventures’ National Account Director, and ten AAA travel agents. Most of us were complete strangers, but that would change fast.

We were greeted in Belgrade by our Local Leader, Filip Friskich. Filip was tall, charmingly blunt and almost exclusively wore punk rock T-shirts. Like all Club Adventures Local Leaders, Filip was local to the area – having grown up in Croatia. He would be our guide throughout the trip, leading us through a total of four countries: Serbia, Bosnia and Herzegovina, Montenegro and Croatia. After a dinner out in Belgrade, we fell asleep in our local hotel.

The next day, we loaded into a stylish red minibus, helmed by our quiet and pleasant driver, Vlado. (In all the time I spent with him, Vlado only said 3 words to me: “Feeling okay?” and “Cold!” They each felt like gifts.) We were on our way to Sarajevo.

When we arrived in the city, we met up with our Insider Expert (our city-specific guide), Muhamed Vlajčić. Since we were all starving, Muhamed treated us all to Bosnian burek, a flaky, spiral pie with various delicious fillings, from spinach to cheese to meat. Burek quickly became a group favorite. After we were filled up with pastry and yoghurt, Muhamed took us on a tour of Sarajevo’s Old Town. We started to learn about this great city at the intersection of Eastern and Western culture. And we also started to learn about its painful past, like when we come across souvenirs made from old bullet casings.

The next day in Sarajevo, Muhamed took us on a tour called “Times of Misfortune,” which detailed the Siege of Sarajevo and the Bosnian Genocide. Our normally chatty and cheerful group grew quiet as Muhamed told us about his own experience growing up during the siege – and the literal scars he still carries. We headed to the Sarajevo Tunnel Museum and learned about the secret tunnel that became a lifeline to the people of Sarajevo. We even went through a small section of the tunnel, which was cramped and dark. I’m not a tall person by any means, but I had to double-over to walk through. Claustrophobia rose in the back of my throat like bile, and I scrambled out of the exit like I was being chased. I’d only walked about 80 feet. I can’t imagine going through that tunnel for 370 yards.

We returned to the city proper, and Muhamed guided us up to the top of the Yellow Fortress, so that we could view the city from above. It was a beautiful tapestry of red-roofed buildings and winding roads, nestled among the mountains. To see a city that survived so much was incredibly moving. Sarajevo was a trip favorite. None of us wanted to leave.

On the bus the next day, Filip said, “Anyone sitting on the right side might want to move. Because of the cliffs.”

We were driving to Durmitor National Park in Montenegro, along winding mountain roads. Also, every couple of minutes I would look out my window and see nothing but a sheer drop down a cliff-face. It was beautiful, but it was also a little like being on a rollercoaster for six hours. At one point, the bus pulled off the road and we all actually screamed – but we weren’t plunging off the mountain. We were stopping for a surprise picnic.

“This was all Vlado’s idea,” Filip said as he opened a box of burek.

“Vlado!” We all cooed, and Vlado shrugged demurely.

When we reached the highlands, it felt like we were in a different world – a world of rugged mountaintops and sky and green grass. We came across a group of wild horses on the road and stopped to gingerly approach them.

“This,” Bethany said while she snapped some photos, “is really travel unscripted!”

I could write a novel about all of the beautiful things we saw on our ride to and through Durmitor National Park. We were unendingly spilling out of the bus to take pictures. At one point I started shouting about “Lord of the Rings.” When we reached the little ski lodge where we were spending the night, we were drunk on the scenery (and possibly the altitude).

In the morning, we left the mountains and arrived at the Adriatic Sea’s Bay of Kotor. Kotor is a beautiful beach town, crowded with tourists and locals alike. Our insider expert led us through Kotor’s Old Town, where fat feral cats roam around medieval-era buildings. We were then invited on a small boat tour, where we visited Our Lady of the Rocks, a church built on a man-made island in the middle of the bay. Some of us also took the opportunity to jump off of the boat for a sunset swim.

The next day, we had some free time in Kotor. I took the opportunity to wander around the Old Town myself, before retiring with a pastry and a good book to my hotel balcony, which overlooked the city and the water. I felt very European. That evening, a few of us got together for dinner and talked about how close we’d gotten over the course of the trip. It was amazing, the way we were willing to open up and share our life stories with what had previously been a group of strangers. I guess that’s what small-group travel does, though. It brings people together.

My final stop was in Dubrovnik, Croatia. We were greeted by our local guide and headed to Dubrovnik’s Old Town – a medieval fortress that serves as King’s Landing on “Game of Thrones.” We walked along the walls around the city, which provided picturesque views of the Adriatic Sea. Afterward, we toured through the streets and heard ancient stories about Dubrovnik’s past.

That night, we had our last dinner as a group, in a restaurant at the base of the building that doubles as the “Game of Thrones” Red Keep. We were already feeling a little sentimental, but then Filip put us all over the edge by gifting us each a copy of “The Bridge On the Drina,” a famous novel about the history of the region we’d traveled through together. I couldn’t believe the trip was coming to an end.

In the morning, I shared a cab with Julia Ivey, another member of the group. We hugged at the airport like we were sisters, and then parted ways.

“Was that your friend?” asked a young couple who were also New York-bound.