The Top Ice Hotels and Attractions in the Northeast and Beyond 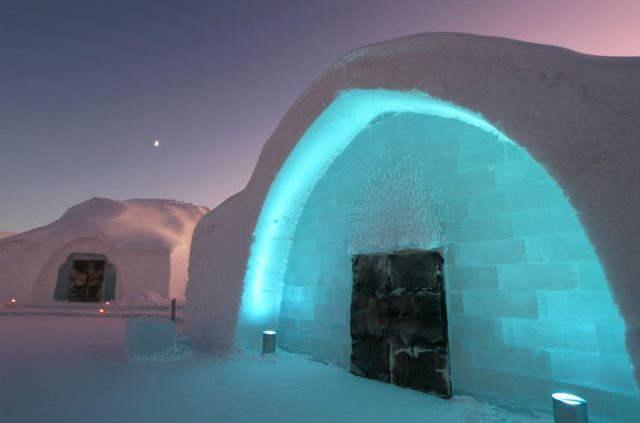 Ice hotels have quickly become a popular trend in travel destinations with new locations popping up around the globe. But it hasn’t stopped there. Now venues are taking it the next level, creating everything from elaborate bars and lounges to museums and castles constructed completely out of ice. Here are some can’t-miss ice attractions at home and abroad.

The Ice Hotel, or Hotel de Glace, is the only hotel in North American made of ice. It contains 42 unique rooms, including some with fireplaces. If sleeping in temperatures hovering around 25 degrees is too cold for your blood, you can buy tickets to visit the hotel, which also includes an ice bar.

Guests and non-guests alike are encouraged to experience a guided tour of the structure. Here you’ll discover the processes and secrets of the construction of the hotel, visit the ice workshop, make your own ice glass and top it off with a cocktail at the ice bar.

Beginning in 1989, Icehotel, located in the small Swedish village of Jukkasjärvi, 125 miles north of the Arctic Circle, has been reconstructed every winter using tons of ice from the nearby Torne River.

Every aspect of the building is made from ice, down to the beds in guest rooms and glasses at the hotel bar. And it’s not just a place to sleep. Icehotel doubles as an art gallery, with roughly 40 artists creating ice carvings throughout the structure each year. Even if you don’t spend the night, you can take a guided tour of the hotel.

Icehotel offers both cold rooms, which maintain a temperature of 19 to 23 degrees, and warm rooms. It is recommended to stay one night in a cold room and a couple in a warm room. The location also features an ice bar and even a church.

Starting in 2016, the destination became a yearlong attraction with the creation of Icehotel 365, a permanent ice structure open to guests 365 days a year. It’s kept cold using a refrigeration unit run by energy from solar panels. The seasonal component of Icehotel continues to be constructed annually.

As part of the Newport Winter Festival, Gurney’s Newport will be home to the Polar Pineapples event. For two weekends in February, the hotel will set up an outdoor ice bar. Guests can purchase a drink and then gather around one of the fire pits, all while enjoying scenic waterfront views. Attendees also receive free hot cider.

The Sagamore Resort creates its Glacier Ice Bar & Lounge each winter. It takes upward of 18,000 pounds of ice build the attraction, which also includes exquisite ice carvings. Guests can sip their drinks in the sub-zero lounge before warming up next to the fireplace at Caldwell’s Lounge. The ice bar is only open on select dates, so make sure to check its calendar. 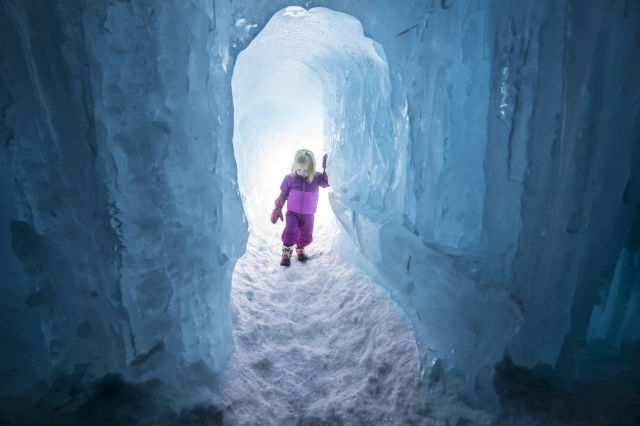 The Ice Castles attraction in Lincoln, N.H., is one of six locations in North America.

Ice castles are no longer just the things of fairy tales and Disney movies. Created by a company aptly named Ice Castles, these majestic frozen structures are built using hundreds of thousands of icicles hand-placed by professional ice artists. The castles include breathtaking LED-lit sculptures, frozen thrones, ice-carved tunnels, slides, fountains and more. The attraction has also been known to hold special events, such as visits from certain enchanted frozen princesses and fire performances. There are currently five other locations in North America.

On the grounds of Chena Hot Springs Resort sits the Aurora Ice Museum. Created from more than 1,000 tons of harvested ice and snow, the museum is the world’s largest year-round ice environment. It stays a balmy 25 degrees thanks to a patented absorption chiller, the first of its kind used for this purpose.

Inside you’ll find ice sculptures of jousting knights, a giant chess set, igloos and spheres. It’s all the work of champion ice carver Steve Brice. Adding to the otherworldly allure are ice chandeliers that illuminate the space with the colors of the aurora borealis.

If you find yourself traveling during the holiday season, you may want to consider staying at Gaylord Hotels. Each year, four of the company’s resorts – in Dallas, Nashville, Orlando and Washington, D.C. – hold Ice!, an indoor wonderland with a variety of holiday scenes created from 2 million pounds of ice. It also includes thrilling ice slides that stand more than two stories tall. Each location has a different theme, including “Charlie Brown Christmas” and “Rudolph the Red-Nosed Reindeer.”

The ice used in the show arrives at each destination in approximately 36 truckloads over a three-week period. Gaylord Hotels employs expert artisans from the city of Harbin in northeast China. The temperature in Harbin stays below freezing for almost half the year, allowing locals to gain ample experience in ice carving. (More on that below.)

You don’t have to be a hotel guest to enjoy the event as it’s open to anyone with a ticket. The event runs through early January, so if you miss it this time around, make sure to plan for next year.

Speaking of Harbin, it has an ice festival of its own, which just so happens to be the largest such event in the world. The annual events takes place from December through February. The most popular attraction is the Ice and Snow World, consisting of huge landscapes, buildings, sculptures and slides, all built out of snow and ice and colorfully lit at night.

Hyde Park Winter Wonderland is a wonderland unlike any other. It has roller coasters, ice skating, comedy shows, a circus and much more. And when it comes to ice, it has you covered.

The Magical Ice Kingdom is a forest filled with redwood trees, wolves, unicorns and more all carved from 500 tons of ice. To get your own ice carving career started, join an ice sculpting workshop. Here, you’ll get to create your own ice masterpiece under the tutelage of the U.K.’s finest ice artist. And finally, stop by Bar Ice for a festive drink surrounded by beautifully carved ice sculptures.

Winter Wonderland closes in early January, so start planning now for next year!

Have you visited any of these icy destinations? How was it? Tell us in the comments.

Find and book your next getaway with AAA Travel.

This post was originally published in 2019 and has been updated.