Embark on a Luxury European Cruise

Luxury European cruises are a trend you don’t want to miss out on. Review this sample river cruise itinerary for an idea of what’s in store. 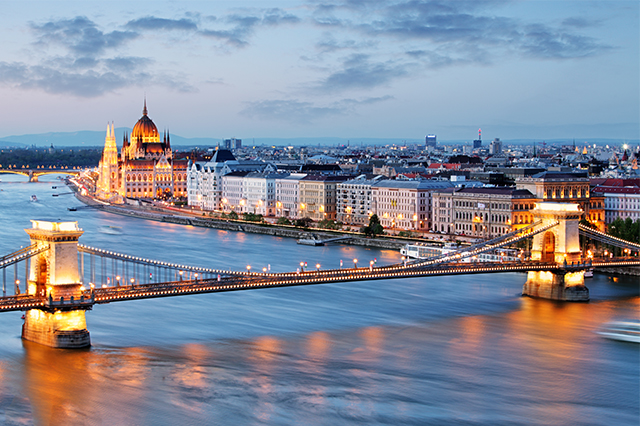 If you have your sights set on one of the luxury European cruise vacations that everyone has been talking about, here’s a look at what a typical itinerary might consist of.

We’ve based this travel plan on a standard 14-night journey through legendary European waterways with stops in five different countries.

Picture yourself on the waters of the Rhine, Moselle, Main and Danube as they carry you gently through Holland, Germany, Austria, Slovakia and Hungary, exploring striking vistas rich with history, culture, lore and traditions. On your journey, you’ll sail by castles, fortresses, villages and vineyards and through the dramatic Rhine Gorge. Tours include adventures in Amsterdam, Cologne, Budapest, Vienna and much more.

Many luxury European cruise tours open in Budapest, Hungary’s capital city. Meet your fellow travelers at a welcome cocktail reception. Later, enjoy an evening cruise to see Budapest’s stunning night skyline before enjoying a folklore show. While in Budapest, you may embark on a tour featuring its historic Buda Castle area, Fisherman’s Bastion and 500-year-old St. Matthias Church. You’ll enjoy splendid views as you sail between the twin cities of Buda and Pest, nestled on opposing banks of the river.

Venture through Vienna’s Imperial architecture, including the Hofburg Palace, the Vienna Opera House, the Ringstrasse and St. Stephen’s Cathedral.

Relax and enjoy the surrounding scenery as you cruise through the Wachau Valley, dotted with magnificent castles and small riverside towns. Cruise past Melk Abbey, a magnificent 900-year-old Benedictine Abbey and one of Europe’s largest Baroque monasteries.

In stunning Linz you can take a stroll through the city with a local expert and discover its many treasures.

Here the rivers Inn and Ilz join the Danube. Disembark from your luxury European cruise and get acquainted with this beautiful city on a walking tour. Discover its gems including St. Stephan’s Cathedral and the world’s largest church organ.

Regensburg is one of Germany’s best-preserved medieval cities. A city walk features the old Town Hall, the 12th-century Stone Bridge, St. Peter’s Cathedral and the Porta Pretoria. The ship enters the first stretch of the fascinating Main-Danube Canal as you make your way towards medieval Kelheim.

Depart on a guided tour of picturesque Nuremberg, Bavaria’s second largest city. You will be awed by 900-year-old ramparts, the Imperial Castle and the Justice Palace. Later, continue sailing and arrive at the impressive stair-step locks where you will ascend to the highest point of your cruise.

Cruise through the final stretch of the Main-Danube Canal to Bamberg, a UNESCO World Heritage site. Disembark and enjoy a guided tour to discover the history of this medieval gem, founded in 902.

Arrive in Würzburg. Nearly destroyed during WWII, Würzburg has been rebuilt into a beautiful Franconian town. Visit fascinating sights including the magnificent Prince-Bishops Residence. Continue cruising through the pastoral Franconian wine region.

In Wertheim, get to know the city on a walking tour through its cobblestone streets, followed by a visit to the famous Wertheim Glass Museum. Continue to Miltenberg with time to explore the city and market square.

Sail through the dramatic Rhine Gorge, dotted with hilltop castles. You will see the legendary Lorelei Rock before arriving in Rüdesheim, a charming Rhine Valley wine town. The “Winzerexpress” mini-train takes you to Siegfried´s Mechanical Musical Instrument Museum for a guided tour. Explore the historic pedestrian street Drosselgasse on your own.  Later, cruise to Koblenz, at the confluence of the Rhine and Moselle rivers and enjoy an early evening walk.

Cruise the scenic Rhine River to Cologne, one of Germany’s oldest cities. A guided tour through the old part of the city highlights the twin steepled, 13th-century Gothic cathedral.

Take a leisurely paced tour of Amsterdam highlighting its 500 bridges, intricate canal system, charming churches and 16th-century homes. Later, glide along the canal on a cruise through the city center. A farewell dinner is followed by a typical Dutch folklore show.

To learn about AAA vacation packages and to search for or book a trip with a luxury European cruise itinerary similar to the one outlined above, go to AAA.com/Vacations.