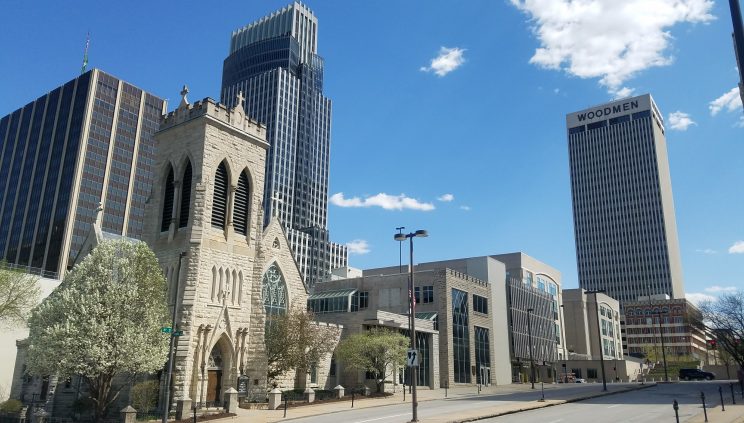 Don't let this tranquil picture fool you: Omaha is bustling.

When this Northeasterner was summoned to a work conference in Omaha, Neb., he was far from excited.

So I went with an open mind.

The extent of my knowledge of Omaha before this visit:

Pre-trip, I did a little research. But I knew I wasn’t going to have a swath of time to devote to the impressively reviewed Henry Doorly Zoo & Aquarium or Joslyn Art Museum – two popular things to do in Omaha. I’d have to keep my stops quick and organized.

But first, I had to deal with an unexpected source of anxiety that this born-and-bred New Yorker has never had to face before: tornadoes!

There were tornadoes in the Omaha area the night before I was flying out. This led to several Google searches which only fueled the fire of fear. After learning that I should seek out a small, low room if extreme winds hit, I was ready to go.

I landed at Omaha’s Eppley Airfield and couldn’t help but lol when I was greeted by an imposing Omaha Steaks kiosk. 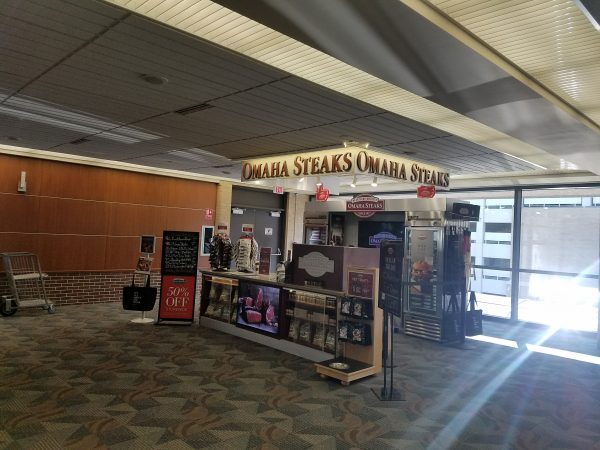 Omaha wastes no time putting the steaks right in your face when you land at Eppley Airfield.

The first stop on my list, and for some unexplainable reason the most important (aside from the business I was there to conduct), was to visit the Bob Kerrey Pedestrian Bridge. The S-shaped, swaying suspension bridge extends over the Missouri River and connects Omaha to Council Bluffs, Iowa. My destination was not Iowa; rather, it was to experience two states at once.

I can now cross Iowa off my list of states I have visited. 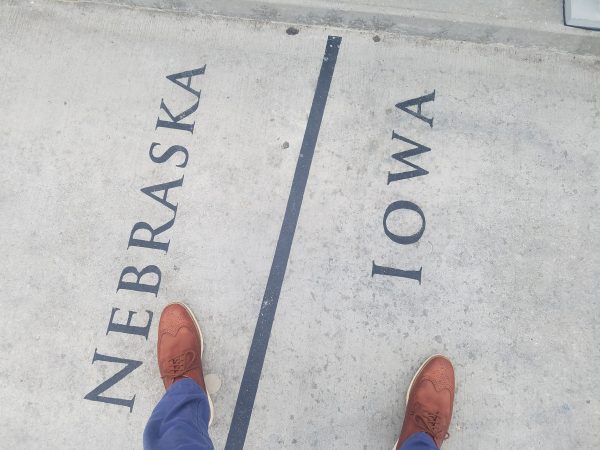 I fulfilled my goal of “bobbing” across two states.

The walking trail connects to the original landing site of the 1804 Lewis and Clark Expedition, the explorers who were the first Americans to cross the Continental Divide. Pretty cool.

The drive from the airport to my hotel included a spin through the north downtown area which houses TD Ameritrade Park Omaha, the 24,000 capacity home to the College World Series (CWS) and the Creighton University Bluejays. The CWS is a big deal here. You can feel it in the air, even during non-game days.

The surrounding area looks like a tailgater’s dream, with bars and rooftops galore, reminiscent of Fenway-Kenmore Square. Even sans baseball, rock shows at Slowdown, the patio at The Trap Room and movies at Filmstreams would define a good time on any given weekend.

Passing through the outskirts of downtown, I passed the 1.1-million square foot CenturyLink Center Omaha. The sign in front of the venue proudly boasted upcoming visits from U2, P!nk and other mainstream superstars. But the venue’s biggest draw is still the annual Berkshire Hathaway shareholders meeting. Aside from offering up Q&A time with business genius Warren Buffett, the event has become a standalone attraction in its own right. People come from all over the world hoping to walk away with information that will set them on an upward financial journey.

Speaking of upward, the majority of streets in Omaha that run north to south use a number system, not entirely different than New York City. And, opposite of NYC, the higher the street number, the more hipsters you can expect to find.

The drive to the hotel in La Vista, a southwestern suburb of Omaha, took us through Boys Town, home to the century-old initiative that helps struggling children become productive members of society. It’s also the namesake (as my dad told me several times before I left) of an Oscar-winning movie starring Spencer Tracy and Mickey Rooney.

After settling in, it was time to brave some severe thunderstorms and head to dinner.

We hit up AAA Two Diamond Rated Brother Sebastian’s Steakhouse, designed to resemble a monastery, both inside and out. Chants and bells usher you in as you’re greeted by attentive, robe-wearing waitstaff. 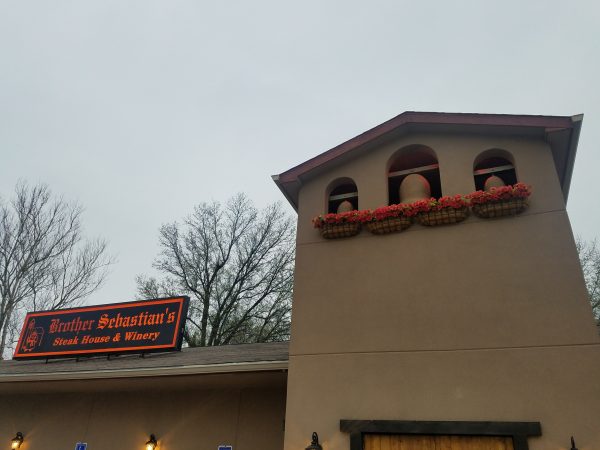 I won’t comment on the thematic concept at Brother Sebastian’s. All you need to know is that the steak is the real deal.

The concept is unique and interesting, and the windowless design makes you feel worlds away from everything. The steak lived up to the hype: melt-in-your-mouth filet that was probably mooing the day before.

Bread and butter, baked potato and butter, and broccoli in butter might have been a caloric nightmare, but it was a foodie’s dream.

In order to fit in another stop with my limited time, I hopped in the car and traveled to historic Dundee (at least that’s what the signs everywhere told me). Driving through Dundee was no accident: it’s home to the only storefront eCreamery – a killer ice cream shop that specializes in delivering custom ice cream flavors to your doorstep anywhere in the United States.  I remember the two owners appearing on “Shark Tank” several years ago. Foolishly, none of the “sharks” invested, however, the show helped catapult the brand’s sales. And with rich, creamy and inventive flavors such as Cones, Caps & Gowns (cake mix ice cream with chocolate waffle cone pieces and purple sprinkles), its success is no surprise. 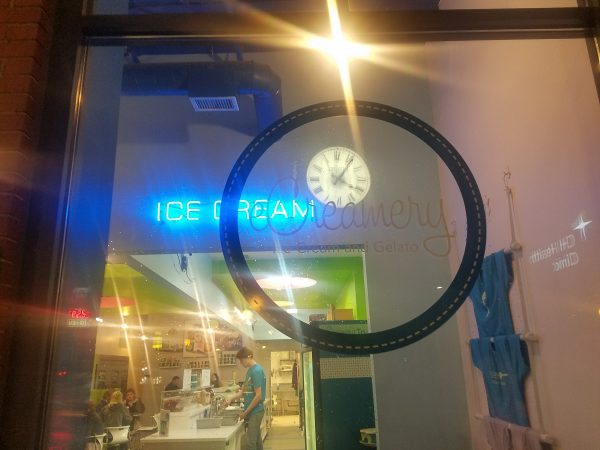 eCreamery is one of many cool spots in downtown Dundee.

As many New Yorkers and Bostonians tend to do, I cracked open my Zillow app while in Dundee to torture myself. After all, aside from San Fran, we pay some pretty steep prices for our houses. It’s always fun to see what people are paying in other parts of the country. Much to my dismay, the beauty of these houses was only rivaled by their prices – not cheap! I can report that the Silicon Prairie is alive and well. It’s home to serious money – and maybe even the next big thing.

If you ever make the trip to Omaha, let me answer a question you are bound to have. Do you know what Aksarben is? It tends to pop up on various signs throughout the city and surrounding suburbs.  If you haven’t figured it out yet, it’s Nebraska spelled backward, and apparently, it’s a thing.

And so is coffee.

I know coffee is prevalent pretty much everywhere in the modern world.  But I didn’t expect the spirit of The Monk of Mokha to be rampant in Omaha. Coffee shops are abundant, with Crane Coffee’s eight locations leading the charge. The Bike Union, an Omaha-based example of altruism at its finest, serves up coffee with 100 percent of the money moved into youth mentoring programs. It’s also a full-service bike shop. Nifty. If you’re a bike-share guy like me, you’ll love the 35 stations that Heartland B-cycle has sprinkled throughout Omaha.

The next day was chock full of meetings and commitments, but I did find time in the morning before my flight home for more exploration. After all, I had to make my eight free hours count! 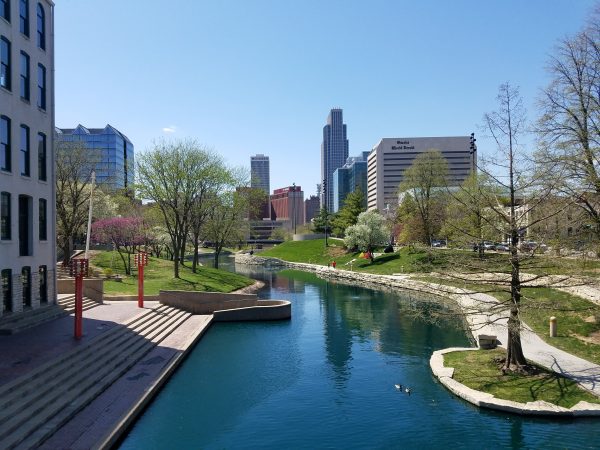 A visit to the Old Market Historic District is a must. Echoing shades of South Street Seaport in New York, the area retains its open warehouse feel and brick-paved streets from the turn of the century. Expect to find colorful art displays and funky street performers. 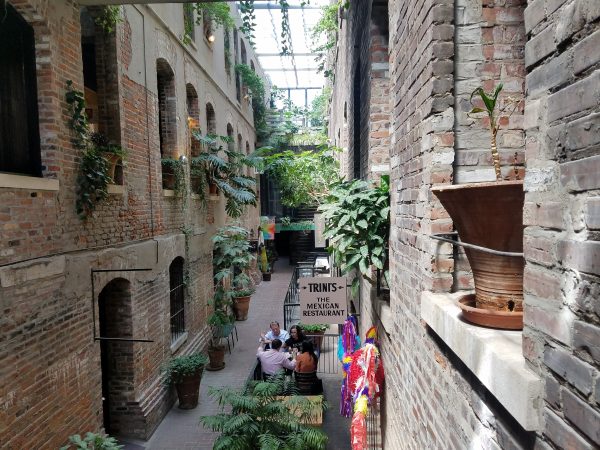 This Old Market passageway is one of Omaha’s many hidden gems.

A stroll through the Heartland of America Park proves peaceful and enchanting. The walking trail along the man-made lake had out-of-towners, like yours truly, gawking at the 320-foot-tall fountain display. (Vegas’ Bellagio only shoots 200 feet in the air, so take that, Nevada!).

Did you know that AAA members get a discount on Omaha Steaks online and in-store?

Another observation is that Omaha sure loves statues. There’s lots of ’em, everywhere. At First National Pioneer Courage Park you will find a bronze display depicting pioneer families’ westward expansion, a historic nod to America’s early settlers. I saw it while stuck in a little bit of traffic. Yes, traffic. Omaha has that too. Albeit, on a smaller (and politer) scale than I am accustomed to. 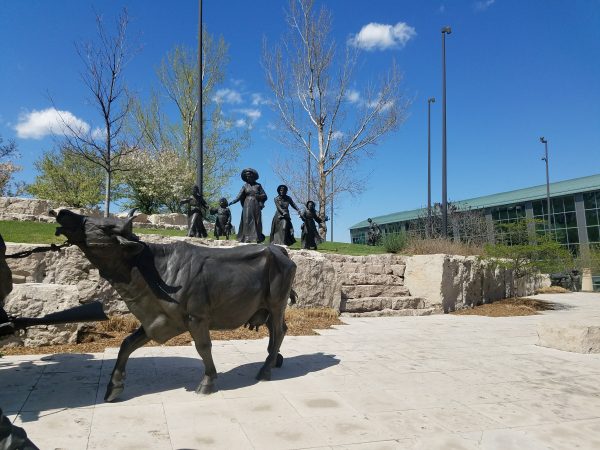 As I was heading out, I asked a colleague – and Omahanian: “You guys seem to have everything here. Is there anything missing?”

Without skipping a beat he responded, “We don’t have any professional sports teams.”

With all of the wonderful things I saw in Omaha and the obvious renaissance that’s underway, I find it hard to believe that won’t change in the coming decade. But for now, they do have an indoor football team – the Omaha Beef. Go figure.

FIND AND BOOK A HOTEL WITH AAA IN OMAHA