Don’t stay at home this October! Celebrate the spirit(s) of the season at one of the top haunted houses in America. They’re to die for. 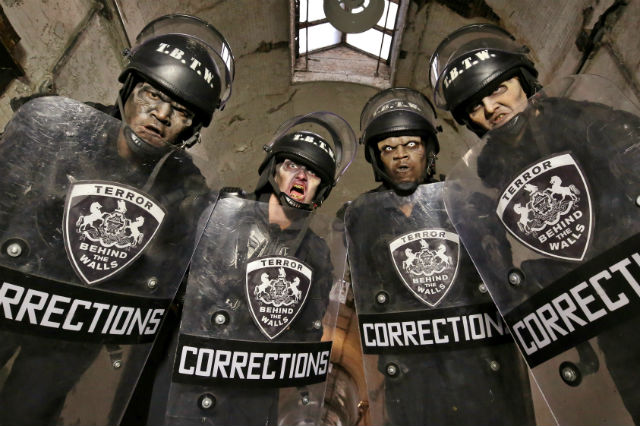 Halloween is right around the corner, and with it comes a bevy of haunted houses, hayrides, mazes and more. Halloween haunts have been an American tradition since the Great Depression, when haunted houses were a cheap way to stir up some thrills and chills. This year, those celebrating are expected to spend an average of $102.74 on Halloween-related purchases, making Halloween America’s second-biggest holiday. Don’t stay at home this October! Seek out scary fun at the top haunted houses in America.

You don’t have to go far when you’re looking for a haunt! The land of Salem and Sleepy Hollow has a lot to offer when it comes to haunted houses. Northeasterners looking to get spooked can check out any of these haunts.

There’s no better place for a haunt than the eerie, abandoned cellblocks of Eastern State Penitentiary. This former prison is a museum by day, but in the autumn evenings it transforms into Terror Behind the Walls, a sprawling haunt featuring six different haunted attractions. You can choose to witness the scares at arm’s length, or you can don a glow necklace and make the terror interactive. Necklace-wearing patrons will be touched by the monsters, confronted and sometimes even separated from their parties. Eastern State Penitentiary is the perfect backdrop for one of the top haunted houses in America, since many believe it is actually haunted.

Try saying that seven times fast. Located in the historic (and haunted) Hudson Valley is a 250-year-old farm. Every October, that farm turns into a nightmare. Headless Horseman Hayrides and Haunted Houses is a sprawling Halloween bacchanal, complete with a 1-mile haunted hayride, a twisting corn maze and seven different haunted houses. With just one ticket, you can explore haunts like the Lunar Motel, the Horseman’s Tomb, Dr. Dark’s Black Spider Circus Sideshow and more. Oh, they also have escape rooms.

Featured in the documentary “Haunters: The Art of the Scare,” Haunted Overload in Lee is an outdoor haunted trail that takes the “spooky forest” genre to the next level. Haunted Overload features massive, hand-crafted sets and props, along with a forest full of actors ready to terrify. The haunt is totally immersive – there are even scares on the line to get in! For those who aren’t quite ready for such intense scares, Haunted Overload offers two other experiences: Friday Night Lite – a low-key version for easily spooked adults, and Day Haunts – a daytime, actor-free walk-through for young children.

Top Haunted Houses in America: Across the Country

If you’re willing to travel a bit further for your next haunt, check out one of these amazing haunted houses outside the Northeast.

This immersive haunt is filled to the brim with special effects designed to disorient, shock and thrill you. Netherworld has been haunting guests for over 20 years, and organizers aren’t going to stop any time soon. Scare actors are outfitted with movie-grade makeup and prosthetics, making your encounters shockingly believable. This intricate, carefully crafted haunt should not be missed.

Louisiana is the perfect place for a haunted house, and the 13th Gate makes use of its setting by infusing the haunt with a voodoo atmosphere. From live snakes to secret passageways, the 13th Gate doesn’t skimp on any scares. The crew works year-round to make these few weeks in autumn the scariest they can be.

You can sample all the different kinds of haunts at Hobb’s Grove in Fresno County. Hobb’s Gove offers a laser-tag haunt, a haunted forest, a haunted house and a haunted hayride. This is an indoor-outdoor-everywhere haunt that is sure to spook everyone in your party. Taking a break from the haunts? Hang out at the midway, which has a mystical Halloween atmosphere without any scares.

If you’re a true horror fan, don’t miss this haunt. Universal Orlando’s Halloween Horror Nights is the gold standard for theme park haunts – and it’s not for scaredy-cats. At Halloween Horror Nights, you can find immersive haunted houses, heart-pounding scare zones, live entertainment and select park attractions. This year, you’ll find scares themed after The Texas Chainsaw Massacre, The Bride of Frankenstein, The Haunting of Hill House, Beetlejuice and more. This haunt is not for younger guests, and it’s not recommended to bring children under the age of 13. The scares are just a little too intense.

What’s the best haunted house you’ve ever been to? Let us know in the comments below.

2 Thoughts on “Visit the Top Haunted Houses in America”