8 Can’t-Miss Six Flags Rides Near You

To make sure you don’t miss out on the best of the best during your next visit, check out this list of can’t-miss Six Flags rides near you. 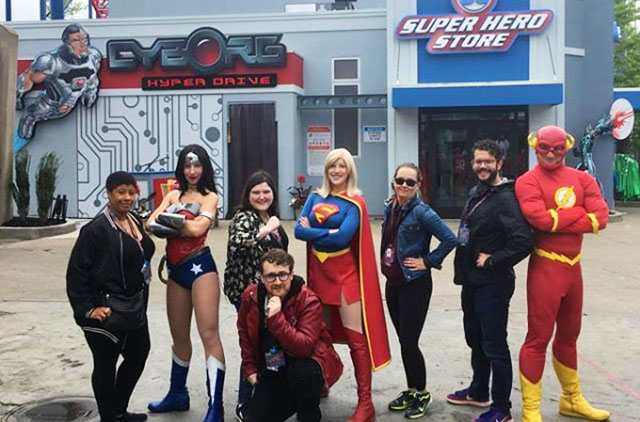 Recently, I had the pleasure of heading to Six Flags New England to try out their brand new thrill ride, Cyborg Hyper Drive. Cyborg, based on the DC superhero of the same name, is now New England’s largest indoor thrill ride – with spins and lifts that will make you dizzy. AAA Northeast Social Media Manager Sierra Barter and I took one of the first rides on Cyborg’s opening day – and we had a little bit of trouble finding our balance afterward.

Besides Cyborg, what are the other Six Flags rides that you should check out? Here are a few of our favorites.

Six Flags Great Adventure’s El Toro is a massive wooden roller coaster that lifts passengers nearly 200 feet in the air before dropping them down a 76-degree incline. This coaster has been a park favorite since it opened in 2006. It’s the smoothest wooden roller coaster that I’ve ever been on, but it still makes me feel like I’m on the back of a bucking bull (it’s not called “El Toro” for nothing). If you don’t go to any other Six Flags rides on this list – go to El Toro.

Superman the Ride is a coaster classic, and one of the best Six Flags rides anywhere. This sprawling steel coaster takes up nearly half of the park, and it’s difficult to go anywhere in Six Flags New England without seeing its bright red tracks. This ride is so good that it’s been spun off and cloned in several other Six Flags parks. Superman the Ride is a five-time winner of the Golden Ticket Award for the best steel roller coaster. A similar coaster, Superman – Ride of Steel, opened in Six Flags Darien Lake the same year, and should also not be missed.

When it opened in 1982, Viper was the first roller coaster anywhere in the world to have five inversions. The Six Flags Darien Lake steel coaster might be a blast from the past, but it more than competes with the park’s other offerings. With a variety of hills, loops, inversions and boomerangs, Viper is sure to get you in a tangle.

The Comet, at Great Escape, is a wooden roller coaster with a little bit of history. Since its inception in 1946, The Comet has traveled across Canada and New York, morphing and changing with the times until it reopened at Great Escape in 1994. American Coaster Enthusiasts recognize it as a historic amusement park landmark. Besides having historical significance, it’s also a lot of fun!

Kingda Ka is one of the few Six Flags rides that is just way too scary for me. I’ve never ridden it, and I probably never will, but I can still appreciate what a cool ride it is. It’s the world’s tallest roller coaster, with a drop of over 400 feet. You read that right. This diabolical ride accelerates from 0 to 128 mph. That’s why the recording at the beginning of the ride tells you “Arms down, head back, hold on!” The towering track looks so imposing that the wait might be scarier than the actual ride (but I’ll never know for sure).

Nitro rules. This huge yellow coaster is consistently ranked among the top steel roller coasters by the Golden Ticket Awards, and it’s not hard to see why. Nitro’s design is deceptively simple, with just a lap bar holding passengers in, and no extra moving parts around the loading dock. You just climb in and blast off. The unique twists and turns of this ride are a delight as you speed along at 80 mph. The tallest hill is gut-churning, but it doesn’t toss you around into submission like some other coasters. Nitro is smooth, keeping you alert and involved in the action. But if you chicken out and close your eyes, that’s on you.

What are some of your favorite Six Flags rides? Let us know in the comments below!