The Scariest Roller Coasters in the World

If you can't resist a good thrill, then you don't want to miss the loops, drops and corkscrews of these top coasters. 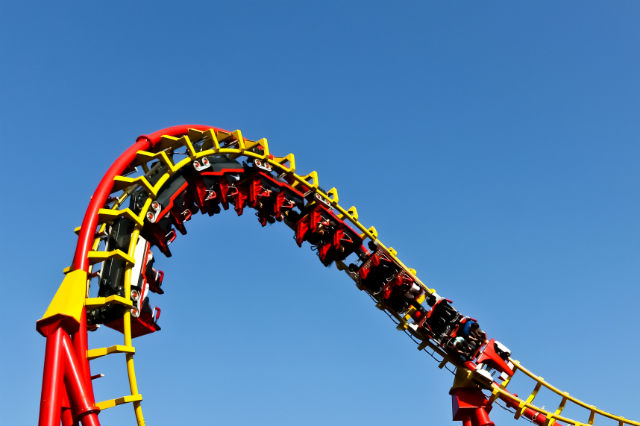 For thrill-seekers, nothing beats a roller coaster – the twists, the turns, the slow climbs followed by heart-in-your-mouth races downhill. Some can be pretty tame, with just a single loop or a gentle series of turns, but true coaster lovers place these scary rides on the top of their lists.

Germany is known for its top-notch engineering, so perhaps it’s no surprise to find an unusual thrill ride at Holiday Park, about an hour south of Frankfurt. Sky Scream starts as expected – the coaster leaves the station and begins up its first hill – but doesn’t quite make it. The car pauses, then races back downhill, carrying passengers backward through the station and up another hill. Again, the car just barely makes the beginning of a twist, then stops and hurtles forward again. The walls of the station are a blur as the ride screams through, this time making it up the hill, through corkscrew turns and straight downward through scaffolding that frames the track.

In Japan, home of the minds who created Godzilla, roller coaster aficionados have several options for scaring themselves silly. At the Fuji-Q Highland in Fujiyoshida, the Takabisha boasts the steepest drop in the world: 121 gravity-defying degrees. This two-minute ride shoots passengers through a hill and inversion in the dark launch chamber before exploding out into the sunlight. The cars races through corkscrews and twists before chugging up the steep incline to the drop riders came for. A teasing pause at the top gives riders a chance to catch their breaths before they race down the improbable angle into the next set of curves.

Also at the Fuji-Q Highland is an unusual 4-D coaster: the Eejanaika. Its whirling experience comes courtesy of seats that rotate independently. Riders twirl their way through the circuit, even glimpsing Mount Fuji briefly, as their feet swing freely in the air. Perhaps the most exhilarating – or nausea-inducing – moment is achieving a “full-full,” where the train does a complete rotation while the rider also does a complete rotation in his seat. During a ride on the Eejanaika, one might even yell out the translation of its name: “Hey, what the heck!”

From the ground, the circuit of Gravity Max coaster at the Lihpao Land amusement park in Taichung, Tawain, resembles many others, with hills and twists. Things are decidedly different, however, as the train leaves the station and noisily chugs up the first hill. Reaching the summit, the train stops. Then, with a whoosh of hydraulics and a kerchunk of machinery, the platform slowly tips, dangling the train over a 90-degree vertical drop. When the platform connects with the track below, the train is released and passengers plummet 13 stories to continue along the twists and single inversion of the awaiting track for this nearly two-and-a-half-minute adventure.

Featuring cars that resemble the Ferrari Formula One racer, down to its Rosso Scuderia color, Formula Rossa is one of the top attractions at Ferrari World in Abu Dhabi, United Arab Emirates, and easily one of the scariest roller coaster in the world. Like the sports cars the park promotes, this ride is fast and reaches its top speed of 150 mph in five seconds, using a hydraulic system that generates velocity much like the workings of the steam catapults on an aircraft carrier. Fitting for such a high-speed ride, the designers looked to the renowned Italian Autodromo Nazionale Monza for inspiration for the track’s layout.

Propelling riders through seven inversions and two tunnels, this coaster at Universal Studios in Orlando provides an unrelenting ride over lagoons and through a 110-foot cobra roll, all at a max speed of 67 mph. Despite its speed, passengers find this coaster gives a smooth ride, particularly when the trains are shot out of the station like a pinball and head immediately into a roll down a 105-foot drop. Like other attractions at this park, this coaster is themed, with riders taking part in a dangerous experiment led by Marvel Comics’ General Thaddeus Ross, the archenemy of the Hulk.

Plan your next theme park vacation with AAA.