Cycling and hiking through Madagascar in discovery of welcoming people and precious ecosystems. 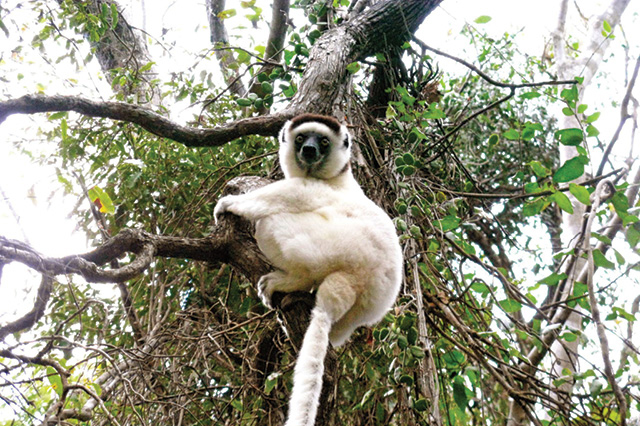 After panting up another slope, enveloped by a quilt of green rice paddies and agricultural fields, I encountered a sight that sent my heart soaring. I pedaled into a village of thatch-roofed houses where residents spontaneously gathered, lining the road. Three dozen grinning children waved and jumped with glee, while older men wearing straw hats shouted “Salama,” the local greeting, and women, swaddling their infants against their chests, perched on a stone wall yelling “Bonjour” and “Bon voyage.” This joyous welcome by the citizenry, unaccustomed to tourists, continued until I was long out of sight, and recurred in each and every village I visited.

During my week cycling and hiking through Madagascar, the world’s fourth largest island off the east coast of Africa, I experienced the country’s disparate beauty. It’s rough and tumble, with pothole-pocked roads filled with motorbikes, minivans, bicycles, wooden carts pulled by zebu (ancient humped, prized cattle) and locals walking to market with goods balanced on their heads. And yet it’s magical, populated by unique creatures and flora found nowhere else in the world, and precious ecosystems like dense rainforests and expansive savannahs that sprawl to the foot of majestic peaks.

Luckily for curious travelers, many tour operators now offer hiking, biking and other itineraries that are opening an intimate connection with this country’s often curious features.

In the Itasy region, near the town of Analavory, I pedaled through a stunning landscape flecked with rounded mounds – old volcanic cones – and veered down a side road toward a series of geysers that bubbled and spewed carbonic acid-laden water. It formed peculiar structures resembling wax-encrusted candles streaked rusty orange. I strolled around ochre-colored rocks to a large pool of turquoise water where I detected the faint odor of sulfur swirling about.

Rolling into 100,000 acres of Ranomafana National Park, I cruised down switchbacks, enjoying the sun-dappled light and dramatically cooler temperatures. Water dripped from thick foliage all around me, and waters gushed into the Namorona River. The next day, I hiked steep trails hemmed in by bamboo, fig, strawberry guava and immense fern trees with Rajeriarison Emile, the park’s first guide who’s been there since 1985. He pointed out adorable golden bamboo and red-fronted brown lemurs – two of the park’s dozen lemur species – as they sprang from one branch to the next. Endangered lemurs are unique to Madagascar and tiny nearby islands. Even the ladybugs are different: They’re tinged with blue.

After cycling south through a vast savannah with impressive granite outcrops and herds of zebu, I traded my bike for hiking boots the next day. I wandered with my guide, Jules, through Isalo National Park, a colorful sandstone realm of water-battered and wind-polished gorges and rock towers. We ambled through the Canyon des Makis where the rugged cliffs are honeycombed with caves that the Bara people use as temporary burial chambers. I felt the isolation as we stood beside wondrous massifs splashed with green, white, black and crimson and listened to the sound of the wind.

Once I reached Ifaty on the southwest coast, I settled into Hotel de la Plage. The resort fronts a white sand beach beside Madagascar’s largest lagoon, where simple sailboats called laka ply the teal waters. Fascinated with the oddly shaped baobab, Madagascar’s national tree, I reserved a van to the nearby Parc Mosa-Spiny Forest. As we meandered through the private park, my guide, Clovis, explained how these trees with their canopies of finger-like branches that reach for the sun are unusual in so many ways. For one, they’re bulging with water. Stopping at the park’s 1,400-year-old specimen, I tried wrapping my arms around its 40-foot trunk, and marveled at Madagascar’s precious inhabitants.

Talk to a AAA travel agent about a trip to Madagascar or other out-of-the-way places.