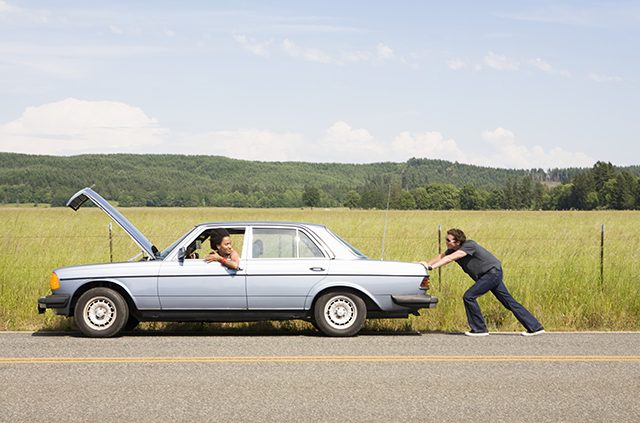 If you don’t feel comfortable or are unsure of the proper way to complete a maintenance task, get it done by a professional. AAA’s Approved Auto Repair facilities are open and available to help with all your car fails and car maintenance needs. Find the AAR shop closest to you.

“To err is human.” -Alexander Pope

We all make mistakes. It’s a part of life. If you can, it’s best to try and laugh it off and chalk it up to experience.

We asked our readers if they had experienced any car fails when trying to fix up their vehicles. Here are some of their tales.

My daily commuter Prius had racked up nearly 280,000 miles before I needed to replace the drive axles. The job was pretty straightforward, albeit cumbersome, laying on my back in the driveway. Hours later and several busted knuckles, a quick test drive verified all was OK, then a pat on the back for a job well done.

Fast forward to the next morning, and I’m staring at a pink river of transmission fluid flowing down the driveway! I went back under the car and all still looked good, so I thought maybe I should put my glasses on. I always wear safety glasses when I work but was in denial about needing prescription ones for detail work. Well, if not for my stubbornness, I would have noticed the metal spring missing from one of the rubber boots meant to keep a tight seal on the axle, preventing a leak.

I would also like to add another experience as a warning. Be mindful of parking near a beach or areas where seagulls congregate. I parked my black 67 GTO in Port Jefferson, N.Y., one afternoon and came back to find several poops on my hood. I freaked! Guess they didn’t like Pontiacs. At the time I had young kids, so I asked my wife for a baby wipe to clean it before it ruined the paint baking in the sun. Worst mistake! I wiped, rubbed and scrubbed until clean, but when it dried, it left behind three large scratched circles. Several minutes of angry bewilderment and I finally realized…seagulls eat clams, clams filter sand, seagulls poop sand! Don’t ever wipe gull poop, blast it off with a hose first!

When I first tried to tune-up my 1971 Gold Cutlass (points, distributor wires, timing), I did not put back the distributor cap securely enough, so the cap and the wires came out while I was driving to work. Of course the car died and I had to call AAA. The auto mechanic wanted to know where I had my car tuned and I said a local service station. There was a friend of mine with me who was a local newspaper reporter. The next day there was a newspaper article titled “Legend of the Gold Bug.” No names to protect the innocent, but my friend and I were the only ones who knew.

Second story, same car: First oil job, the auto store gave me the wrong size oil filter so when I started my car after changing the oil, I had five quarts of oil on my driveway.

When I was 15 or 16 years old I would do all the oil changes on my parents’ cars. One time my mom bought a new car and the oil pan was where the transmission pan was. I ended up draining the transmission oil. I wasn’t laughing at the time, but in hindsight it is a funny car fail. 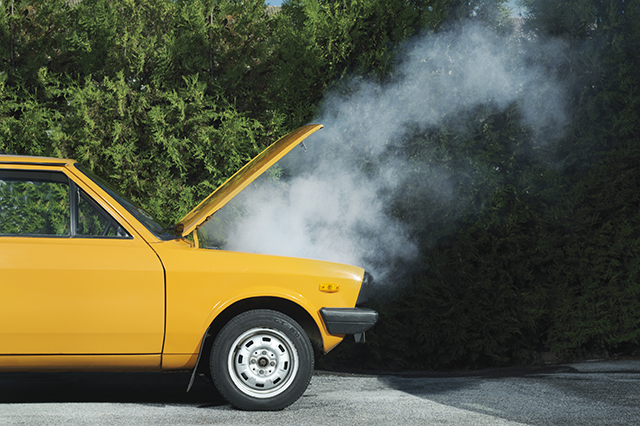 So Close, So Far

I put window washer fluid in the coolant fill – they were close together. I had to call AAA to bring the car to the dealership.

You can now request Roadside Assistance online with just a few clicks of a button.

They Don’t Teach You This in School

When I was in college in the 80s, my best friend had a car at school. Basically the only thing we both knew about cars was how to drive them. You didn’t even pump your own gas back then. One day, her oil light went on, so she went to the station and bought oil. We then attempted to put said oil in the car. “Do you know where it goes?” I asked. “Well,” she said, “you measure the oil here,” as she pulled out the dipstick, “so, it must go in here.” I was unconvinced. “But that tube is so skinny,” I said, “how do you get the oil in there?” Her response was immediate. “We’ll make a funnel with a piece of loose-leaf paper.”

And that’s what we did. As you might imagine, it did not go well. It was at that point we realized, although we were both very good students, there was still much in life to learn.

A few years ago I attempted the first oil change on my newly purchased used Saturn SC2. The owner’s manual warns you not to attempt this on your own, but then continues and explains how to do it if you so choose. I have done this particular service on previous SC2’s so I knew what I was up against.

The oil filter is buried and must be removed from underneath and there is almost no access to it. I knew not to drain the oil first, but after several hours of trying to remove the oil filter I had no luck. I gave up, drove down the road a few miles and the engine simply shut off with no warning. It turns out I had torn the oil filter off the housing and left a trail of oil from the end of my driveway. The engine was ruined, and a learned via a $5,000 mistake never to attempt an oil change on a Saturn again.

I’m dyslexic and tried to change my radiator cap and cables solo. Guess what happened? Luckily, my father-in-law was nearby and helped me untangle the mess.

I needed help bleeding the brake lines, so I asked my brother to pump the pedal while I checked the lines. After 30 seconds, no bubbles! He was pumping the accelerator pedal. This is why I don’t let him near power tools. Afterwards, I took the car for a test drive and the front wheel came off. I’d forget to put the lug nuts on!

Have you ever experience a DIY car fail? Let us know in the comments below!