New York City Expands the Use of Speed Cameras

750 speed cameras will be installed in school zones throughout the city. 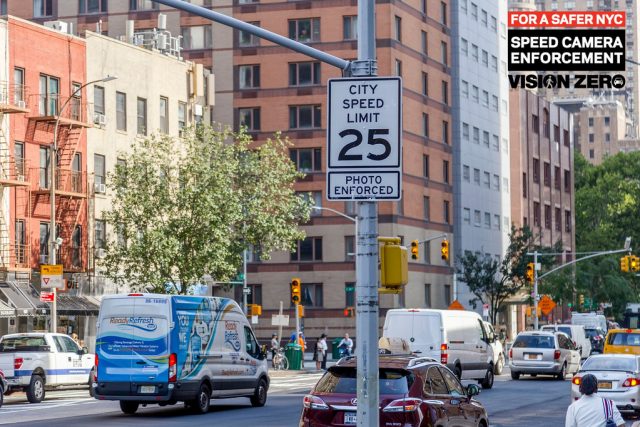 New York City’s speed camera expansion went into effect on July 11. The Department of Transportation will install cameras in 750 zones through an incremental roll out. The cameras will only be located within school speed zones.

New York City reduced its speed limit to 25 MPH in order to make the city safer for pedestrians, cyclists and drivers. While speeding has decreased, it remains a major factor in fatal crashes.

Why is there a need for more speed cameras?

New York City uses a variety of methods to encourage people to drive at safe speeds, including speed bumps, the narrowing of wide travel lanes, modification of traffic control signal timing and police department’s enforcement of the speed limit. Speed cameras are another technology used to help reduce speeds, one that has been proven to save lives. When New York City began using speed cameras during specific hours in a limited number of school zones in 2014, injuries at these locations dropped 17 percent, and speeding dropped by over 60 percent.

Even a small difference in vehicle speed makes a big impact in terms of safety – a pedestrian who is struck by a vehicle travelling at 30 MPH is twice as likely to be killed as a pedestrian struck by a vehicle travelling at 25 MPH. New York City’s speed camera program serves to deter drivers from exceeding the speed limit by more than 10 miles, which helps prevents serious crashes from occurring.

How does a speed camera work?

The speed cameras will operate year-round, between the hours of 6:00 a.m. and 10:00 p.m., Monday through Friday. The camera program uses the same radar and laser technology relied upon by law enforcement to measure a vehicle’s speed. If the radar finds that the vehicle is speeding, images of the vehicle and license plate are recorded. Motorists do not receive a ticket unless they exceed the speed limit by more than 10 miles per hour.

The technology used by the system is able to distinguish between speeding vehicles and nearby vehicles, and will not issue a ticket if it is unclear which vehicle is exceeding the speed limit. In addition, a trained DOT staff member reviews every violation recorded by the cameras and rejects any in which it is not readily evident which vehicle was identified as exceeding the speed limit.

How will I know if I was speeding?

If it is verified that the identified vehicle was speeding within a school speed zone, between the hours of 6:00 a.m. and 10:00 p.m. Monday through Friday, then the driver will receive a Notice of Liability in the mail. The cameras do not identify individual drivers; it is the responsibility of the vehicle owner to know who is driving their car and to pay any fines associated with the Notice of Liability.

A speed camera ticket does not hold quite the same way of a speeding ticket handed out by a police officer. The penalty is $50, significantly less than a traditional ticket. Additionally, unlike a traditional speeding ticket, the speed camera violation is not made part of the driver’s Department of Motor Vehicles operating record nor is it used for insurance purposes. This means no points are accrued to a driver’s license for a violation issued by a speed camera.

What are your thoughts on speed cameras? Are they unfair or an effective tool in improving safety? Let us know in the comments below.

For news and studies on traffic safety, check out the latest form the AAA Foundation for Traffic Safety.