The History of the Presidential State Car

From the Sunshine Special to The Beast, the presidential state car has undergone an incredible evolution.

5 COMMENTS
Cars & Trucks » The History of the Presidential State Car 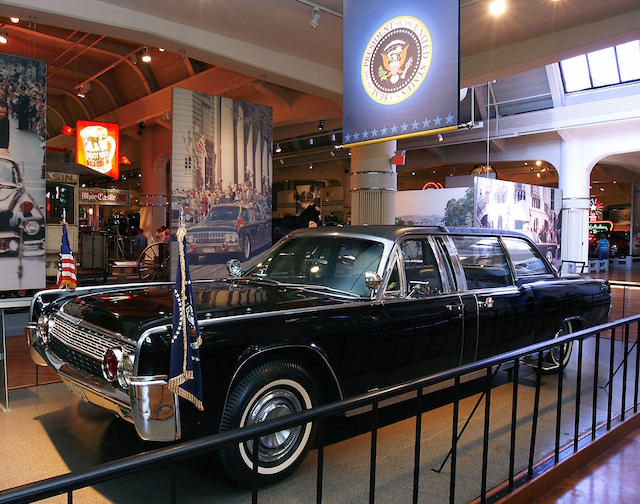 “However, I believe it will do no harm to accept your invitation. It may prove an interesting experience.” —William McKinley

With those words the 25th president of the United States became the first to ride in an automobile while in office. It was the late 1800s and McKinley was accepting an invitation from O.F. Stanley, who had invented a “steam-propelled horseless carriage.”

History tells us McKinley did not enjoy his ride, which shouldn’t come as much of a surprise. After all, open-air vehicles driving on rough roads were not overly conducive to a luxurious experience. Fortunately for the commanders in chief to follow, the presidential driving experience has come a long way.

There are few, if any, vehicles that have earned as much reverence and intrigue as the presidential state car, and for good reason. Each one is both innately historic and one-of-a-kind. You do not need to be a historian or car aficionado to appreciate them.

These cars tell stories – about the presidents who rode in them and the country they oversaw.

During the early 1900s, U.S. presidents were driven around in standard production cars available to the general public, or at least the segment of the population that could afford such a vehicle back then. It wasn’t until Franklin D. Roosevelt’s presidency that the Secret Service began using specially built official state cars.

FDR’s tenure as president initiated the thought of customizing presidential vehicles for improved security and convenience for two specific reasons. In 1933, Roosevelt survived an assassination attempt as he was giving a speech from the back seat of his open touring car. He also needed a vehicle his wheelchair could get in and out of easily. And so, in 1939, the Lincoln K state car was introduced. Dubbed the “Sunshine Special” due to the fact FDR loved to ride with the roof down, the car came outfitted with a two-way radio as well as handles and extra-wide running boards that Secret Service agents could use to ride outside the vehicle.

After the Japanese attacked Pearl Harbor in 1941, security concerns ramped up even more. As such, the Sunshine Special went back to the factory where armored doors and bullet-resistant tires and gas tank were added. While that was happening, FDR used an armored limo that, according to the Secret Service, originally belonged to Al Capone. The Department of the Treasury had seized the vehicle years prior on a tax evasion charge.

Did you know? Theodore Roosevelt was the first president to ride in an automobile during an official procession, doing so in Connecticut in 1902.

President Harry Truman inherited the Sunshine Special, but by 1950 he was allowed to choose his own car. Rumor has it that Truman held a grudge against General Motors after the manufacturer refused to give him access to their cars during the 1948 presidential election. Therefore, Truman stuck with Lincoln and opted for the marque’s Cosmopolitan model.

Truman used the car for the remaining two years of his presidency. However, the vehicle is more closely associated with his successor, Dwight Eisenhower. It was the 34th president that had the car outfitted with its famous bubble-top roof so that spectators could see him when the top was up.

The most famous presidential state car played a role in one of the darkest moments in U.S. history – John F. Kennedy was riding in a 1961 Lincoln Continental when he was assassinated in 1963.

The car’s bold styling, featuring a low-slung body and suicide doors, personified the young, forward-thinking president. It was customized with a phone system and a mechanism that elevated the passenger seat to allow spectators a better view of the president.

But as aesthetically pleasing as the Lincoln was, it did not have any serious protective features. While the vehicle did come equipped with a clear plastic bubble-top, it was not bulletproof.

After President Kennedy’s assassination, it was clear the presidential limo needed a substantial update. The problem was, there was no time no wait for a new car. Lyndon B. Johnson needed a vehicle right away.

Instead, the ’61 Continental was stripped down and built back up stronger and more formable than ever. Titanium was added to the vehicle’s body, the windows were bullet resistant and a permanent, bulletproof roof was installed. The car remained in use through LBJ’s presidency and into Richard Nixon’s term in office. It now resides in the Henry Ford Museum, along with several other presidential state cars. (Lincoln is a division of Ford Motor Company.)

Presidents Nixon, Gerald Ford, Jimmy Carter and Ronald Reagan would all use variations of the Lincoln Continental. The presidential state car didn’t see a model change until Reagan switched to a Cadillac Fleetwood limousine in 1983. (Aside from George H.W. Bush’s Lincoln Town Car, Cadillacs have been used ever since.)

Modifications of the car included a raised roof that made it easier for the president to see the crowds. The new vehicle’s introduction also ushered in new safety protocols. Beginning with the Fleetwood, presidential cars were only used for official state business and, because of security concerns, this would be the last such vehicle to be preserved.

Did you know? The Lincoln Continental was involved in three presidential assassinations or assassination attempts. In addition to JFK, the vehicle was used to rush Gerald Ford from safety during a 1975 attempt in San Francisco and was the car Ronald Reagan was getting into when he was shot in 1981.

Security measures escalated at a considerable pace in the 1990s. President Bill Clinton’s Fleetwood did not have running boards or a sunroof for safety reasons. It did, however, have telephones, internet access and satellite communications, all of which were considered extremely high-tech to have in a car in 1993.

President George W. Bush’s Cadillac DeVille marked an important milestone in presidential car history: It was the first such vehicle not to be based on a commercial model. Instead, it was built to the specifications of the Secret Service. In fact, by 2001, Cadillac wasn’t even producing cars that could be converted into limousines. It’s speculated that the “DeVille” was actually built on the chassis of one of General Motors’ full-size SUVs. Either way, the car was equipped with an infrared night vision system, 5-inch-thick armored doors and a self-contained passenger compartment with its own secure air supply.

Fast forward to President Obama’s transport. The 44th commander in chief’s Cadillac lived up to its moniker of “The Beast,” weighing 15,000 pounds. The blast-resistant limo had Kevlar-reinforced tires and 8-inch-thick rear doors as heavy as the main-cabin doors of a Boeing 757. The vehicle also carried tanks of oxygen and bags of type AB negative blood (Obama’s blood type).

Did you know? When the president travels, all the vehicles in the presidential motorcade are transported via U.S. Air Force planes.

5 Thoughts on “The History of the Presidential State Car”